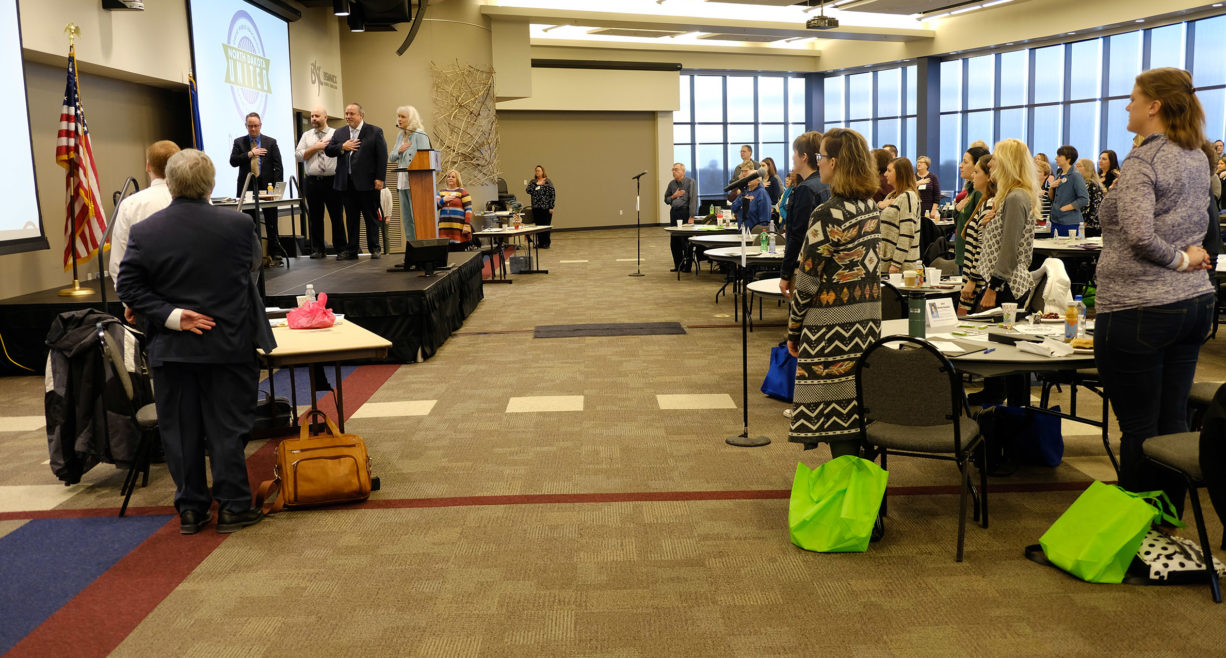 The 2018 North Dakota United Delegate Assembly was officially gaveled into session by NDU President Nick Archuleta at 8:30 a.m. on Saturday, April 14, 2018, at the National Energy Center of Excellence on the campus of Bismarck State College.

Following the singing of the national anthem and reciting the Pledge of Allegiance, President Archuleta got the proceedings off the right way with a rousing speech about the strategic principles around which our work has and will continue to focus. “If we are to grow this organization into the transformative organization that I know it can be, then it is going to take all of us,” Archuleta stated. “Every single member of North Dakota United must engage in the serious work of growing our membership.”

Archuleta was followed by a member testimonial for the impact of our United PAC from Dr. Lydia Tackett, from North Dakota State University. “Unions look out for people and their families,” she said. “I was struck by I don’t think these issues that we’re talking about should be so political … and I’m excited to hit the streets this year and to talk to my neighbors, talk to my co-workers, and talk to others about candidates who understand working families’ needs.”

NEA Director Karen Askerooth then discussed the dramatic changes we have seen in public education over the last two years since she had last addressed our Delegate Assembly. “So much has transpired from the demise of No Child Left Behind (no tears shed!) to the implementation of Every Student Succeeds in our state and nation (hip hip hooray!). NEA resources are implementing techniques to include our aspiring educators and new educators into our NEA fold.”

Sen. Heidi Heitkamp received our Adrian R. Dunn Friend of Education award. Unfortunately, she was unable to join us in-person, but sent a video of her remarks to be played. “Thank you to North Dakota United for this award,” Heitkamp said. “One of my guiding principles in the U.S. Senate is that we must all look up so that we aren’t just thinking about the day-to-day work, but rather looking to the future we are creating for our children, so we are setting them up for success.”

Vice President for Public Employees Gary Feist then went through the proposed budget for the next two years with delegates, and answering their questions.

A silent auction, raising funds for the NDU Foundation that provides scholarships and grants to NDU members and dependents, started on Friday evening at a member social in the Ballroom of the Radisson Hotel in Bismarck. Some great items are up for grabs, including Willie Nelson tickets for a show in Las Vegas, a wine cellar, vintage labor-history items from our friends at North Dakota AFL-CIO, and Amazon Echo, and much more.

Education innovation expert and executive producer of “Most Likely to Succeed,” Ted Dintersmith, asked our members: “What would you need to observe or see from someone else to convince you that somebody has really learned something?”

One of the answers he was given was from kindergarten teacher, and former N.D. Teacher of the Year, Amy Neal of Minot: “Being able to actually do it, being able to explain it and evaluate it.” Dintersmith said that you will get the best possible view of what schools can be in America by visiting a kindergarten class like Neal’s. “If you want to be incredibly optimistic in life, go to a kindergarten,” he said. “These kids are learning at warp speed. Studies show it; kindergarten kids ask 50 questions an hour. Then I go to a high school, and the only question I hear is: Will this be on the test?”

Dintersmith said he has been to North Dakota 11 times, in addition to visiting every state in the U.S. and looking at their education systems. “Honestly, I wouldn’t be doing anything I do — I’d just be home with my wife,” Dintersmith said. “I do it because I believe the future of our democracy is at stake.”

Mary Cathryn Ricker, Executive Vice President of the American Federation of Teachers, was unable to attend the Delegate Assembly as a winter storm has settled in above her hometown of St. Paul, Minn. But Ricker was able to Skype into the assembly, and talked about this critical time in our country’s history for public education and public services. “For far too long, we have been at the mercy of other people,” she said. “So-called reformers, right-wing pundits and think tanks … trashing public employees of all kinds, sometimes it feels like especially teachers. … But no more. Look what happened in West Virginia. All throughout that strike, teachers had the support of every community and every single one of those 55 counties.”

The executive director of the National Education Association, John Stocks, followed Ricker by touching on themes of advocacy, voice and justice.

“Each one of you in this room has your own individual sphere of influence,” Stocks said. “If we were able to inventory all of that (influence) and aggregate it and we were, in fact, able to catalog it and we were able to put it into some of these new systems that show how people have influence in their particular spheres, I think you would see, from this room, alone, plus your colleagues that you’re close to in your locals, that there is a tremendous amount of influence that this organization has over all of North Dakota. … And using those spheres of influence and the relational power you have is critically important for the future of the state … with regard to whether or not it is going to be a state that is looked upon as a state that actually cares deeply about the students of the future, and the people who aren’t the wealthiest folks in this particular geography.”

(This article will be updated later this week with official information on elections, business items passed, speaker information and many more pictures.)