With the release of survey results showing alarmingly high rates of demoralization within the education field, media picked up the story statewide 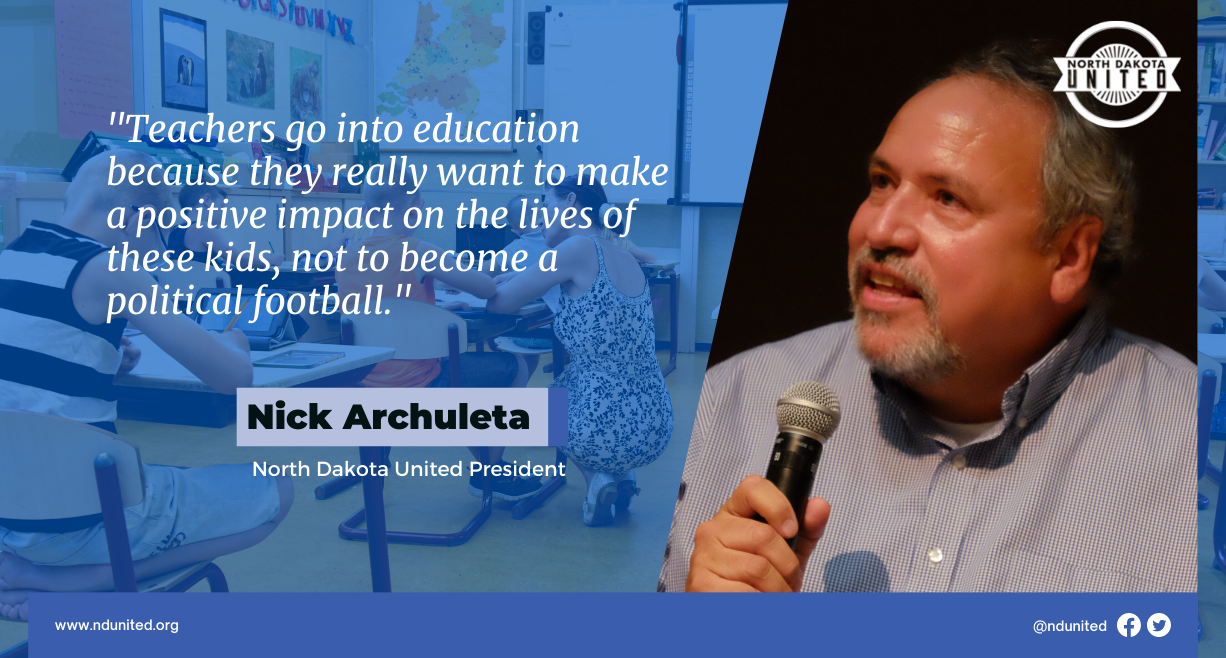 Since releasing the results of our member survey on educator retention concerns, North Dakota United has received a substantial amount of news coverage around this incredibly important issue. ND United President Nick Archuleta has spoken about the survey and shared the stories he’s heard from teachers and education support professionals across the state on why they are feeling overwhelmed and unappreciated in their jobs.

Below, you’ll find a video conversation President Archuleta recorded with our director of public affairs, Tom Gerhardt, reviewing the survey results and answering a few of the frequently asked questions we’ve heard from the media. Additionally, we are including links to all of the press coverage we’ve seen so far at the bottom of the page.

Fargo Forum — “Letter: A response to The Forum’s editorial about teacher morale, resignations”

We read your recent editorial, “ North Dakota should act now to address low teacher morale, resignations .” It suggested we form a task force to draft proposals to present to the 2023 Legislature.

We are pleased to see increased interest in K-12 workforce challenges because, as your editorial noted, this is a critical issue. We want to share steps that have been taken as we continue to search for ways we can collaborate to solve this problem.

The state has a task force equivalent already in place. The K-12 Education Coordination Council , which the Legislature formed three years ago , includes the governor, the state superintendent, legislators, education leaders, and other stakeholders from across North Dakota. The Council is made up of representatives of teachers, counselors, administrators, and regional education associations . North Dakota United President Nick Archuleta, rightly mentioned in your editorial as a person to be consulted, is a member of the Coordination Council.

Kind of funny how a Dar Williams song that I obsessed over in my college years is echoing in my head every day lately: “The world’s not falling apart, because of me …”

I’m a teacher. I have been teaching for 16 years. I am so glad that I chose this profession. There’s something special about watching the lightbulb turn on over a child’s head. There’s something mischievous about leading them toward an “Aha!” moment. It’s almost like, “Gotcha! You’re learning!” There’s something delightful about hearing a kid say, “This is the best day of my life” simply because you took a field trip to the Heritage Center.

It is pure and joyful. It is the gift in learning. Teaching is something with which you fall in love. And you can never turn back.

The North Dakota State Teachers of the Year Chapter consists of State Teacher of the Year recipients and finalists. We represent the many incredible teachers across our state who teach in diverse settings and share a strong commitment to our students and to the teaching profession.

If you ask a teacher what they value about their profession, you will likely hear stories. You will hear about the rewards of helping a student understand a difficult concept, the funny and profound things students say, the privilege of making a positive difference, and the excitement of collaborating with others. If you ask teachers how they are doing right now, you will also likely hear about struggles with exhaustion, feeling overwhelmed, and worry about our students, colleagues, and our profession.

Surveys of teachers provide further warning that more and more teachers are considering leaving the profession, which has struggled along with students and parents with remote schooling during the pandemic.

Resignations and other signs of low teacher morale are flashing red warning lights.

Grand Forks Herald — “Many North Dakota teachers are considering a career change; what might keep them in a classroom?”

GRAND FORKS – A survey conducted by North Dakota’s statewide teachers unionfound that many educators are eyeing the exit.

More than a third of 1,100 respondents to a North Dakota United survey said they were considering leaving the profession or retiring, 8% said they actually would, and only 41% said they could see themselves retiring as a teacher. Top reasons to leave, according to those surveyed, are burnout and “burdensome” extra duties.

BISMARCK — A recent survey by North Dakota’s largest teachers union found more educators in the state are feeling unappreciated, disrespected, overworked and a general sense of frustration about their profession amid the COVID-19 pandemic and “relentless attacks” from politicians.

More K-12 teachers are leaving or considering leaving their job, and in a survey conducted earlier this month by North Dakota United, which represents more than 11,500 public school teachers, only 41% of 1,100 respondents said they see themselves remaining a teacher until retirement — a dramatic decline from the 90% who said they would when they were first hired.

The president of the union that represents teachers and public employees in North Dakota said a new poll shows teachers are burning out.

North Dakota United has released the results of a poll that Nick Archuleta said shows significant drops in teacher morale.

“There was one question that said, ‘As and educator, do you feel appreciated?'” Archuleta said. “Forty percent of the educators said no, and 55 percent said sometimes yes, and sometimes no.”

WDAY Radio — “Survey: Teachers in North Dakota not confident in their profession”

(Bismarck, ND) — Teachers in North Dakota are leaving the profession at an alarming rate, according to a recent survey.

North Dakota United, a state association of public educators, conducted a survey that shows an overwhelming 74-percent of those polled believe teacher retention for the upcoming 2022-23 school year is a major issue. Per the results of the survey, 90-percent, when hired, saw themselves retiring as an educator while now that number has dropped to just over 40-percent.

The pandemic has a lot to do with the lack of confidence in the profession, but also the relentless attacks on teachers by politicians and pundits.