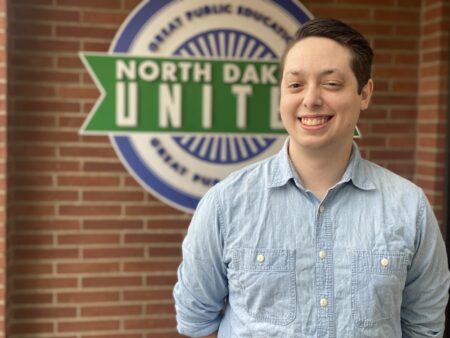 Ben Serber was added to the team at North Dakota United in August of 2021 as Higher Education Organizer. Before coming to North Dakota, he was the president of the Florida State University Graduate Assistants United and the lead organizing fellow for United Faculty of Florida. He received a master’s degree in philosophy from the University of Wisconsin-Milwaukee in 2015 and is in the process of getting his Ph.D. in philosophy from Florida State University.

Ben has been involved in higher education labor activism across the country since starting graduate school in 2013. He’s dedicated to increasing membership and activism on North Dakota’s college and university campuses across the state. His dissertation remains “in progress.” Away from work, Ben said he “enjoys gaming, cooking, watching hockey and unsuccessfully shouting fatherly advice at (his) family’s three cats.”