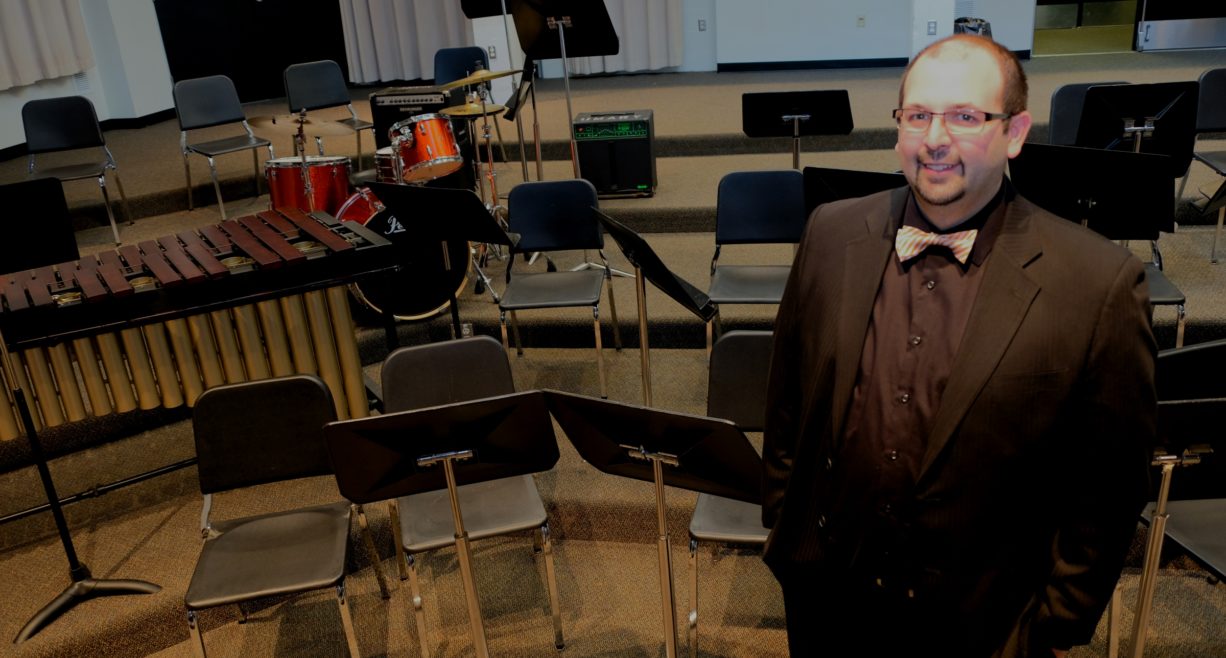 Educators change lives. They do this every day, in every classroom at every school in every community of our state. North Dakota United member Eric Rooke, the director of bands for Williston High School, has been recognized for his ability to improve the lives of his students as a 2018 nominee for the LifeChanger of the Year award by National Life Group. He was nominated by his colleague, Peter Frankman.

LifeChanger of the Year award is an annual program that is sponsored by National Life Group, and recognizes and rewards K-12 educators and school employees across the country. Their program celebrates those who are making a significant difference in the lives of students by exemplifying excellence, positive influence and leadership.

I think music and the arts are a really cool place to be more creative, to think outside the box and to create something from nothing.

Rooke has transformed music and the performing arts, not only at Williston High School, but throughout the whole community of Williston. Last year, the WHS Wind Ensemble, under his tutelage, was named the Governor’s Band of North Dakota. They were given the opportunity to perform in the Capitol Building for Governor Doug Burgum and state legislators.“What a cool experience for my kids,” he said. “First of all, it was one of the greatest things that musically our students have ever accomplished. To be able to put an audition together, to record the audition … and to really work toward a really good quality recording, send that in and then to get the opportunity to play in the Legislative Assembly hall. What an opportunity for our kids, and then for them to get to meet with the Governor and talk about how important music is, what a cool opportunity for those kids. It was so much fun.”

Rooke’s passion for teaching started at an early age, as his parents were music educators as well. “I was watching that relationship between the students and my parents,” he said, “and I really liked that. I grew up going to pep band on Friday nights and watching the basketball games and sitting in the van and just thinking that was the coolest thing in the world. So I wanted to do that when I got to high school.”

Rooke was further inspired by the band director at Bismarck High School, Bob Peske. “He said, ‘Just be great. Do what you are going to do and be great at it,’” Rooke said. “Between him and my parents, I said I’ve got no other place I want to go other than this music thing. I love to play. I love to sing, and I enjoy sharing my knowledge base with my students. I like giving them tools to be successful in helping them to grow and helping them succeed.”

After graduating from the University of Mary with a degree in Music Education, he received a job offer in Williston. “I don’t know how I lucked out at a Classs A school, right out of college,” he said. His wife, Katie, was also offered a job teaching middle school music in Williston. “We said, ‘Well, we’ll stay for a couple of years,’ and that was 13 years ago. We just love it. It’s a great place to be. Some phenomenal education is going on there.”

Rooke has lived and worked in Williston since the oil boom began in western North Dakota, and has seen the region change tremendously. With the expanded student population comes new opportunities and challenges for Rooke’s music department. “I think it’s a good challenge, but I think the reward is far greater than the challenge,” he said.  “When you’re getting kids from all over the country that have played in all sorts of ensembles and have had all sorts of experiences that are moving to Williston and are impacting the program as a whole, that’s a real positive. They bring in such insight and expertise from their schools, or they’ll say, ‘Hey, my band director used to do that at our school,’ or ‘Hey, we did this in our school instead of that. What do you think of that?’ Ok, let’s try it! So I think that there’s some really cool insight that you can get from students.”

And Rooke sees a strong potential in teaching music for better preparing his students for all aspects of their lives. “I think music and the arts are a really cool place to be more creative, to think outside the box and to create something from nothing,” he said. “Because, as I say to my kids on a regular basis, we take paper and ink and we turn it into something that creates and evokes feelings and emotions in people. And that’s a really powerful thing to do as a musician. You take a hunk of metal or a hunk of wood and a piece of paper, and you make music that evokes emotion and creates feelings and brings people together in a way that nothing else does.”

Rooke uses music on a daily basis to change students’ lives for the better. For that reason, he was nominated as a Lifechanger of the Year for 2018. “I could go on talking about Mr. Rooke’s excellence ad nauseam, but instead I’ll end with this: I’ve never seen a teacher make more of a difference than Mr. Rooke,” Frankman said in his nomination. “He truly deserves recognition.”

To nominate an educator in honor of Teacher Appreciation Week, visit their website at lifechangeroftheyear.com.