What’s New on the Cutting Ed 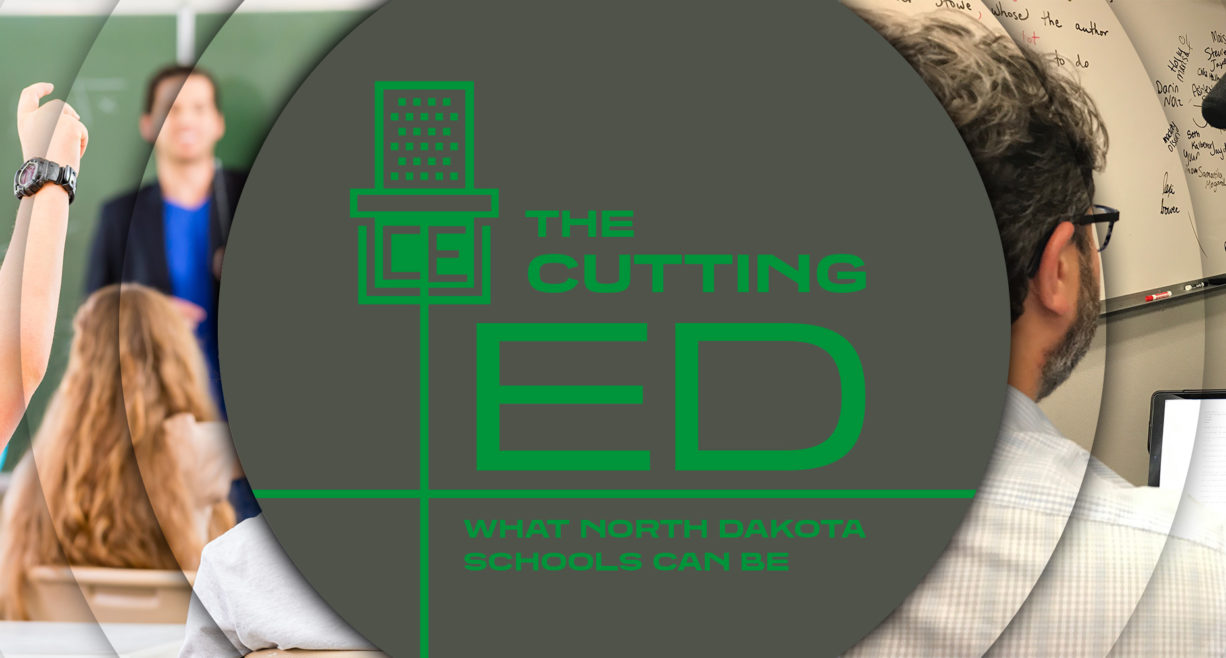 Every Tuesday, we feature a new episode of The Cutting Ed on our website, www.ndunited.org/thecuttinged, and on Ted Dintersmith’s www.ndplaylist.org. Additionally, you can subscribe to The Cutting Ed on iTunes, SoundCloud, Spreaker, iHeartRadio or wherever you find your favorite podcasts.

Here is an excerpt of one of our favorite episodes so far, in which we talked to Dr. Nick Klemisch, the superintendent in Garrison, and Steve Dangel, their principal, about the implementation of flexible modular scheduling in their school district.

Tom Gerhardt/The Cutting Ed: “You told me you attended the governor’s Innovation Summit last June. You were able to hear Ted Dintersmith speak at that point. Tell me what struck a chord with you as you listened at that summit.”

Dr. Nick Klemisch/Garrison Superintendent: “Well, just being willing to try something different, you know, for the betterment of kids, and again I go back to I was really disgusted with complacency. But here we’ve been rebuilding some things that needed to occur before we can make any significant changes. Ted really kind of sparked it with the ‘Most Likely to Succeed’ (movie). Granted, we only saw a short summary of that but at the same token it intrigued me enough to bring it back to my administrative team and say this is something we need to look at from there to be developed into. I always preface the video after seeing it multiple times with this isn’t exactly what I want to do in Garrison. Because, again, High Tech High is High Tech High, and we’re Garrison, North Dakota. So, what can we do for our kids for the betterment of our kids? And what can we adjust and change to make our district stand out as well as better our kids’ education for the future?”

TG: “Steve, were you at the summit and did you see the film?”

Steve Dangel/Garrison Principal: “I remember first looking at it, and the first time you look at it and you think, well, what will this look like? More importantly, you just are thinking, what can we do? What are some of these ideas that we can take and start to bring here? And one of the conversations we’ve had with staff members is, you know, we have a really rural setting and a lot of our kids are kind of ag based. And so, you know, really kind of talking to our teachers and saying, ok, not everyone’s going to go off to a four-year school. In fact, most of our graduates go to BSC and Wahpeton. They go to the two-year schools. And it’s great. So, you know, really kind of getting out of that mindset of saying everybody is going to NDSU and UND and Minot State and (University of) Mary and saying, how are we going to help the students that we have, what can we do differently to allow them to succeed and become productive citizens moving forward?”

TG: “Nick, you talked about coming back to school after being at the summit, and I thought a really interesting thing you mentioned was this innovation committee that you formed at the school. Tell us about that and how it’s comprised and how it’s helped as you look at making a transition to flex mod scheduling.

NK: “We got a number of teachers that volunteered for it. And I told them … I have no fundamental purpose here other than to see if there’s something we can do differently. So, the conversation started. We’ve talked about a number of different things at the forefront would be the flex mod schedule. We’ve talked about a modified week with potentially going four days of traditional or flex mod and a fifth day of potentially PBL or Steam. But before we can jump into that role or at least that avenue, I guess we have to start somewhere, and that’s where the conversations around flex mod really started taking off. And we had a number of teachers that really … I just kind of let him run with it. They’re kind of the drivers behind this. I mean, he talks about some of his teachers … from both the elementary (and) high school level that were really pushing this because a lot of it goes back to their own kids they know and understand that their own kids learn differently. I mean it’s no different than my 6-year-old, by the time he was 2, he could manipulate an iPad better than I could. Well, it’s in their hands, it’s information that’s accessible, so what are we doing here what do we need to change here to make it better for our kids and give them the tools that they need to make the successful life really.”