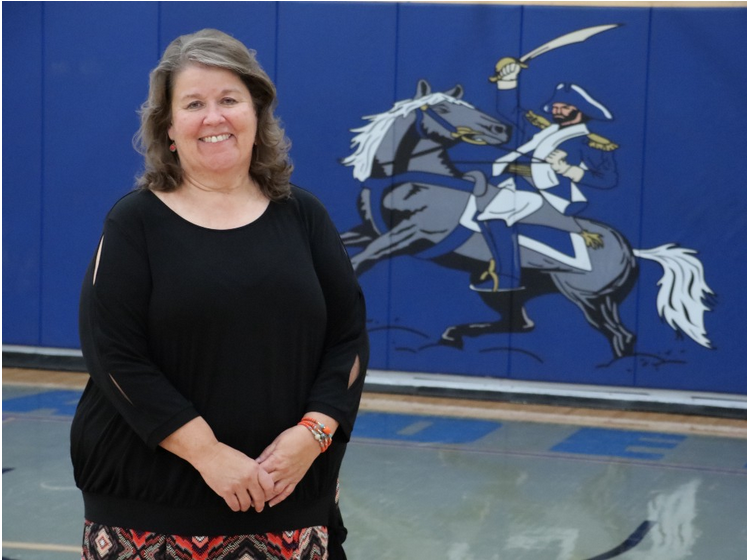 Susan Anderson had some big shoes to fill when she began her teaching career 40 years ago in Richardton.

“I replaced a nun. I did!” Anderson said. “So that was the first shock for the kids, instead of a nun walking into the classroom, in walked a teacher that was not a nun.”

Anderson, also a 40-year member of North Dakota United, was recently named the National Speech and Debate Association Coach of the Year. In her career, she’s built Richardton-Taylor into a powerhouse, winning 11 state speech titles, including six straight, from 2007 to 2012. Even more impressive, her students have won 17 Student Congress (debate) titles, competing against Class A schools.

More than all the banners that hang in the gym and the hardware that fills the trophy case, Anderson says it’s the kids that have kept her going.

“Sometimes you see a little seventh- or eighth-grader coming down the hall that looks just lost, and one of the students told me he’d never forget that finger pointing him into my room because it changed his life,” she said. “He ended up going to a national tournament three times and had an opportunity to be away from the farm, did a lot of traveling across the country, and it opened up an entirely different world for him.”

She says her career-defining moment happened with a student that never made it to finals or took home a trophy.

“I came home one day and there was this present and a card, and she had written a note about how I had changed her life because I had taught her that the most important thing was to be determined, to never give up on yourself, to just work at making yourself better. And that’s probably the most defining moment and that still was lots of years ago but you know then you’re doing what you’re supposed to be doing.”

Anderson is known affectionately to students as “Mrs. A” or “Mama Sue.” “Mrs. A.” came from her first day in the classroom.

“I don’t know why ‘Anderson’ is a really hard name, but from the get-go, one kid said “Mrs. A” and it just was from that point on and very seldom was it Mrs. Anderson,” she said.

“It would have been four years ago last spring when a graduating senior did his valedictorian speech and did the reference to ‘Mama Sue,’” Anderson said. “I think they started that because there were several kids in there that were floundering with identify and floundering with dysfunctional homes and there were kids that would just come in and say, ‘Mrs. A, I need a hug to get through the day.’”

Senior Josie Wicks has high praise for Anderson, saying she’s taught her to voice her opinions and believe in herself no matter the situation.

“I would not be able to do what I can without her help and support through it all,” Wicks said. “She has prepared me for the ‘adult’ word and has built up my self-confidence so that I know I am capable of anything I set my mind to. Without the selflessness help of Mrs. A, not only me, but every other student who has attended Richardton-Taylor High School, would not be the young adults we are today. We cannot thank her enough for how much she has done for us and for being the perfect role model.”

Anderson says her passion for communication began at home. Growing up in Hettinger, she said she repeatedly heard from her parents that “so much could be resolved if people were willing to communicate.” Two important mentors at Dickinson State helped fuel that passion, Dr. Winifred Stump, who was her speech teacher, and theater director Jean Waldera.

In her first year teaching at Richardton in 1978, Anderson says she maybe had six kids in speech. A strong class in 1980 and continued support from administration and school boards, as well as dedicated students and parents, are credited for the continued success.

If there is a secret to her success, Anderson says it lies within the way she interacts with her students.

“Honestly I think the most important thing is I have a very different philosophy about teaching,” she said. “I tell my kids I’m not a teacher, I don’t like the word teacher, because I cannot teach you — you have to choose to learn. So I can lead you to learning, but I can’t teach you. You have to open up your mind.”

Anderson says she realized early in her career that Richardton was a special place, saying that no matter what the win-loss records are in sports, the community’s sense of pride in its school and its kids shines through.

“Maybe that’s the reason I stayed for 40 years,” she said. “It probably is the reason because I think that’s so important. It’s easy when you’re 12–0, but it’s not so easy when you have a 0–12 season, so our parents and the community continue to support those kids whether they win or lose.”

Anderson has been a member of her union for her entire. She says she believes it’s crucial for people to be involved in professional organizations, even if you don’t always see eye to eye.

“Are there times I have philosophical differences?” she asked. “Oh, yes, there are. There are some things that, on a national level, I think we should just step back from because they’re such private issues, but at the same time when you balance the scale is seems so important to be involved in one way or the other.”

When she started her teaching journey 40 years ago, Anderson says she had kids that hadn’t even been to the Red River Valley. There were three meets in an entire school year, including regionals and state. Now, there are 12 tournaments, a regional, state and national tournament. She’s gone from six kids to around 40 in the speech and debate program. What hasn’t changed is Anderson’s desire to continue to work with kids and help them become better communicators.

“I hope that the young kids, the seventh graders I’m working with now, become those enthusiastic seniors you saw today,” Anderson said. “I think that has to be fostered. In a system this size, if we all work together, kids have so many opportunities that they don’t always have.”