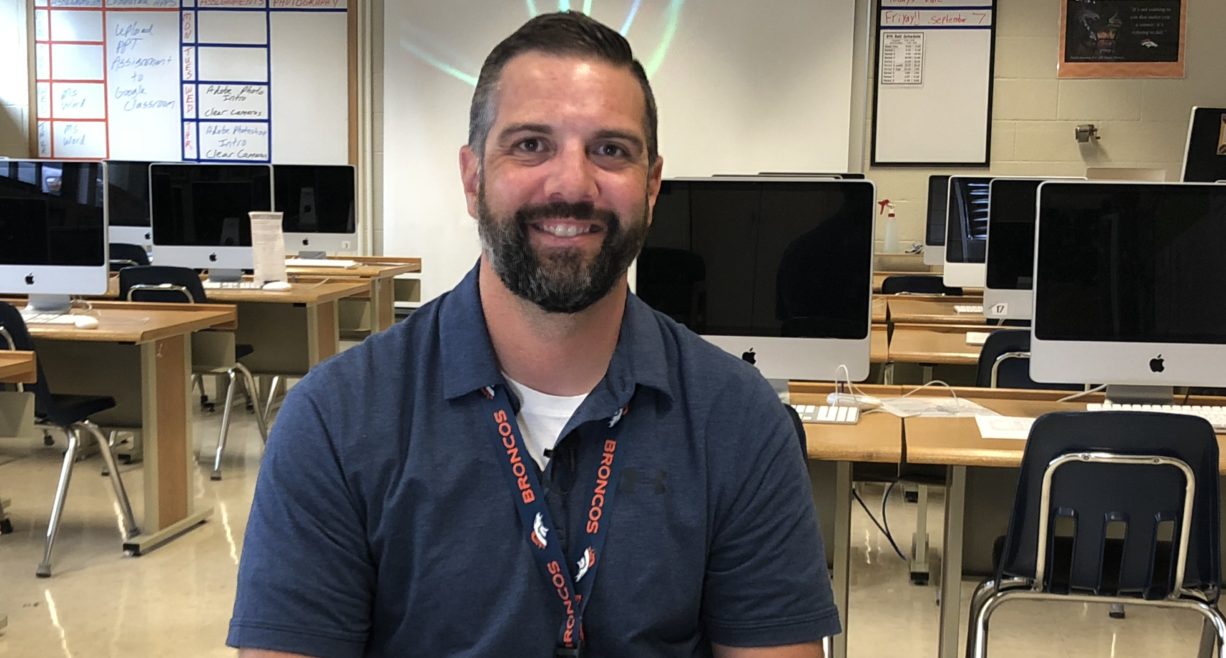 Tyler Okerlund is a first-year teacher and North Dakota United member who brings a diverse set of skills to the classroom following a successful business career. He’s also a proud veteran of the United States Navy and North Dakota Army National Guard.

As an advocate for veterans, he shares his story as an example of the multitude of skills  veterans can bring to the classroom.

First-year teacher Tyler Okerlund’s classroom points to a proud past.

He served in the Navy for four years — stationed in Japan.

Back home, he signed up for the North Dakota National Guard, finished college and went to work.

After more than a dozen years in the private sector, his job was cut.

“I said OK, I’ll become a sub,” Okerlund said, “so as I was subbing I would say about 80 percent of my time was here at Valley Middle School where I got to know the students and the staff, and it became so clear that I enjoyed coming here everyday to sub and why don’t I see what I can do to become a teacher?”

That’s led Okerlund to the Transition to Teaching program–which allows districts to hire non-traditional teachers in teacher shortage areas with industry and/or military specific skills while he finishes his degree.

“I couldn’t have made a better decision,” Okerlund said. “I’m truly honored that I would even be sitting down giving an interview based upon my experiences especially coming from the military into the teaching profession — but it’s been kind of a little struggle here and there to try and get adjusted to the classroom, and the way that we handle things in the military is obviously a 180 difference compared to how you handle things in the classroom.”

Okerlund says his military experience, which emphasized teaching and training, is invaluable.

He’d like to see each individual district across the state look at military experience to see if it could be considered in step placement.

“The Fargo Public School district gives up to two years experience depending upon the Superintendent’s decision,” he said. “Now it could be one, it could be two years depending upon how much you actually relay in your resume I feel is very important to. I’m not saying just because a veteran does this you should give him this, no, I would way acknowledge it, at least look at it, put it into a possible agreement. Yes we’re gonna look at veterans. I know I’m not the only veteran in the state of North Dakota that’s teaching.”

“There are other veterans that have served far more tours than I have,” Okerlund said. “Some have even put their lives on the line a lot and then they want to change something in their life. If we were able to help those veterans look at a career path into teaching potentially, you know there are a lot of great military veterans out there that may not be looking at becoming teachers but some of that experience is very valuable to bring into the classroom.”

Military experience has also opened doors for Okerlund to develop relationships with students, who ask questions about his past. He says without that time serving our country —he wouldn’t be where he is today.