‘To Form a More Perfect Union’ 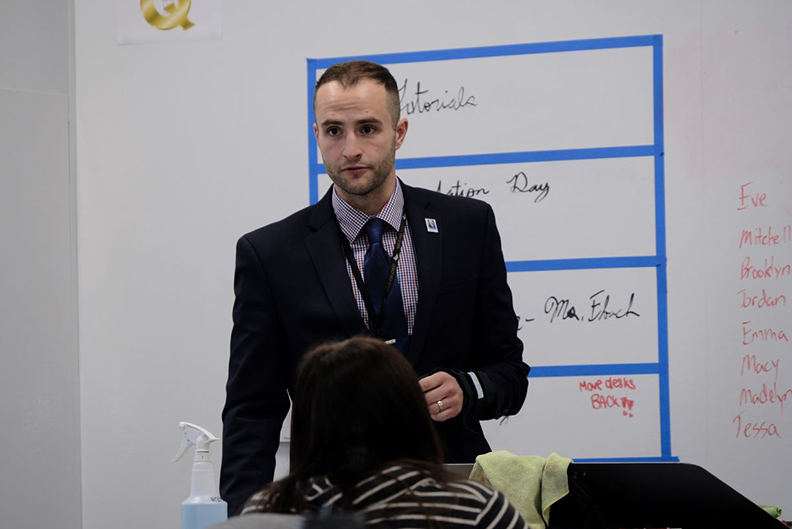 Since its ratification in 1788, the United States’ Constitution has functioned as the supreme law of our nation, and a “living” document whose exact meaning is still debated fiercely to this day. In recognition of its importance, the federal government established the James Madison Memorial Fellowship Foundation in 1986 to help improve how this document is taught to students in secondary schools.

Each year, the Foundation awards fellowships of up to $24,000 to “teachers, college seniors, and graduates who wish to teach American history, American government, or Civics,” according to its website. To date, 1,706 fellowships have been awarded.

At the start of the 2021-22 school year, Landen Schmeichel, a history teacher at Legacy High School in Bismarck, was announced as one of the recipients of this prestigious award. Being selected for the honor wasn’t a total surprise, as the application process was rigorous, but being selected so early in his career was somewhat unexpected, he said.

“I was really fortunate,” Schmeichel said. “I know a few teachers who’ve been given it (and) have had to apply and reapply over the course of several years. And I was really lucky because this was the first time I had applied, and I got it in my first try. I couldn’t believe it. I thought I would be playing the game for a couple of years, and then it was there, a FedEx package, and I lost my mind.”

As part of the fellowship, Schmeichel attended a six-credit Summer Institute graduate course on the Foundations of American Constitutionalism at Georgetown University. Typically the institute is held at the main campus in Washington, D.C., but due to COVID-19 restrictions, they stayed at a neighboring campus in Arlington, Va., called Marymount.

“The professors were incredible,” Schmeichel said. “I have probably two notebooks full of notes that I took, and the thought-provoking questions that they gave, not only during the lecture time but in the time (when) we engaged with the material as fellow teachers from across the nation … that was so enriching. I think that my teaching has been utterly transformed because of that experience.”

When asked about an experience that stood out from the rest at Marymount, Schmeichel pointed to a wreath-laying ceremony at the tomb of President George Washington in Mount Vernon. “Having the opportunity with two other teachers,” he said, “one from Boston and one from Tennessee, and then I’m the guy from North Dakota to carry this wreath into the tomb of George Washington, I wasn’t expecting to have that opportunity. … History, at that point, really came alive because, you can read about George Washington in the textbook, but there’s a ceremony honoring him, and then you’re selected to carry that wreath over. I was incredibly honored to be able to do that.”

His fellowship is allowing Schmeichel to pursue a master’s degree from Ashland University in Ohio, through online courses. “What I really enjoy about Ashland is it’s all primary-source based,” he said. “So, it’s not a professor lecturing us on his philosophy or his perception of American history. Let’s go read the Constitution and see what it says. Let’s go read the Federalist Papers. … I’m taking a course on the 14th Amendment and realizing how (it) has basically permeated almost every legal situation in the country and how it’s changed us as a people. Race and equal protection, privacy rights, entrepreneurial rights. All of those things are fascinating to learn about, and ultimately it’s making me a much better teacher.”

Schmeichel is finishing his fourth year in teaching at Legacy after graduating from Dickinson State University in 2017. While in college, he served as president of Student-North Dakota United (SNDU), and he has been an active member of the Bismarck Education Association and ND United since he started.

He compares his membership in ND United to lessons he teaches, and is still learning about, in U.S. history. “As an American, I think it’s especially important to realize the history of unions and how they have largely benefited not only American workers in the field of education, but also of American workers, as a whole,” Schmeichel said. “It’s much like in our history, in 1776, people didn’t just sit around and say, ‘Well, the British government is being mean to us. They should stop doing that.’ They took action. They rooted their action in the law (and) in philosophy. And they rooted in the idea that we could all be better, as a society. And that’s what I find resonant in both the Declaration (of Independence) and the Constitution, and in being involved in any civic opportunity, including that of being a union member.”