Long before the #redfored movement, Minot teachers risked everything to improve the state of education 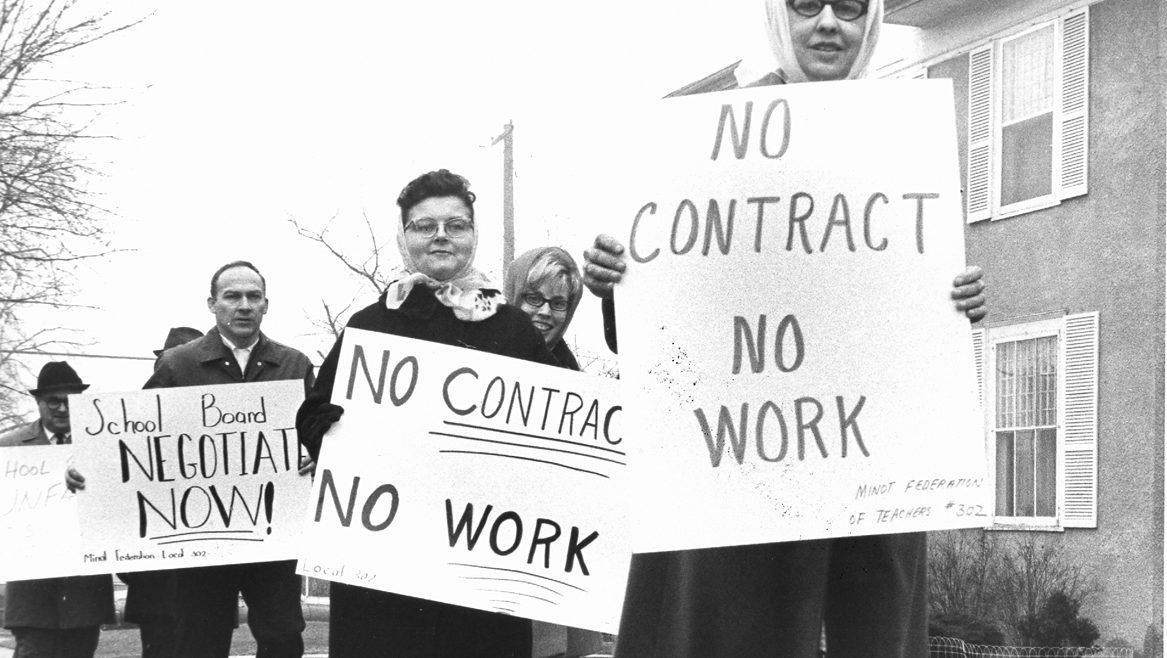 It is March 28, 1969, and the Minot School Board has just moved to issue teachers’ contracts in a special session by formally terminating negotiations between the teachers and the board. Negotiations had broken down several days earlier, with teachers unhappy over a decreased rate of increase on their pay. Their superintendent was instructed to issue contracts with a $6,000 base salary and a revised salary schedule, eliminating four lanes – from 10 down to six.

Teachers were feeling additionally frustrated at how quickly negotiations were terminated. “We could have arrived at a more satisfactory agreement, I believe,” Rudy Zupetz, then-president of the Minot Federation of Teachers, told the Minot Daily News. “Had the board’s team not insisted upon winding everything up Friday night. They felt they could not keep the news media waiting upon further negotiations.”

Minot teachers were not alone in the frustrations they were feeling 50 years ago, nationally or in the state of North Dakota. An editorial in the Williston Herald from February of 1968 stated that “a new breed of militant educator s rising in this country,” and quoted Sam M. Lambert, then-executive secretary
of the National Education Association, as saying: “the average male classroom teacher cannot afford to give his family even a moderate standard of living in a large city.”

U.S. Bureau of Labor statistics from that year estimated that a household income of $9,200 per year was required for a family of four to live a “moderate” lifestyle.

“Teachers who have lived and taught in communities for a lifetime are putting jobs on the line in an effort for better salaries, which they strongly maintain will result in better education for their community’s children,” wrote Dick Palmer, the editor of the North Dakota Education Association member magazine, The North Dakota Teacher, in March of 1968.

Larry Lane was a young teacher at Jim Hill Middle School at that time. He taught history, geography and basic math, and said that salary then was not
his primary concern. “I think for some of the people it was,” Lane said, “but I was quite young. I guess it was such a free-wheeling time, I had already interviewed a couple of places in California, and they had given me a contract option. We had people flying in from everywhere, from Washington D.C., I don’t know where all. They were just trying to hire up as many as they could get because everybody was looking for teachers at that time.”

On April 2, approximately 150 of Minot’s 430 public school teachers went on strike. According to a news release from the MFT, the teachers requested that “negotiations with the Minot School Board on several matters, including teachers’ salary schedule, employment security and restoration of educational programs such as remedial reading and elementary music,” be reopened.

Fifty years before the #RedforEd movement, which has involved thousands of teachers in several states, including West Virginia, Oklahoma, Kentucky and Arizona, performing similar actions for similar reasons, the North Dakota education system faced a similar reckoning. Teachers across our state, and the United States, felt they weren’t getting the resources they needed in order to give students the quality public education that they were promised.

At the time, teachers were divided into two groups. The Minot Federation of Teachers was an affiliate of the American Federation of Teachers, and
mostly represented junior high and high school teachers. The Minot Education Association, which consisted mostly of elementary teachers, then had 260
members in Minot and was an affiliate of the National Education Association.

Lane said he wasn’t a member of either association. “I never believed in it,” he said, but when his colleagues went on strike, he joined them at the labor
hall for the first two days. “As far as the unions were concerned, I think the Federation supported the teachers a lot,” Lane said.

“I’ve always been union,” Gloria Lokken said. She was an education student at Minot State College, as it was known then, and supported the teachers in
their action. “My husband is union, and I’ve always been union,” she said, “so, I might have had a different attitude than many people, but that’s the only way we could get ahead.”

Trading off headlines, splashed across the front page of the newspaper, were stories about the strike and of a catastrophic flood of the Souris River in Minot. The flood would eventually cause millions of dollars in damage to businesses, homes and private property, and displaced thousands of Minot residents from their homes.

They were threatened, and they went to jail. I can’t thank those people enough for having the guts to go through with it.

Diane Anderson was a college student in education at Minot State during that time and remembers both the flood and the strike.  “The biggest impact at that time in my life was the ’69 flood happened at the same time,” she said, “and we were out of college probably the whole last month of school because I lived in the south part of town and you couldn’t get to Minot State from that side of town.”

Anderson said that she supported the teachers, as did many in Minot, but that she wasn’t able to follow their story very closely at the time because of the flood.

Lokken, who also was a student at Minot State during the strike, supported the teachers. “When you’re looking at going into an area where you’re going to make your money and make your future, we wanted things to be better for teachers,” Lokken said, “because they weren’t. And it wasn’t fair.”

The strike would continue for a third day as some students returned to classes from holiday on Tuesday, April 8. The school board directed its attorneys to
seek an injunction in court against the teachers, and District Judge Roy A. Ilvedson granted the request. In a memorandum opinion of Judge Ivedson, he wrote, “I have determined that it is my duty to issue a temporary restraining order to restrain and enjoin the teachers of the public schools of Minot from engaging in a strike.”

Teachers defied the judge’s order, and some picketed in front of the school administration building. They held signs that read: “Injunction No, Negotiate Yes” and “No Contract, No Work.”

By this time, Lane said he had mostly disassociated himself from the protests. “That was during the flood, of course,” he said, “and I was fighting the flood. I was on [the picket line], maybe a couple of days. I’d see it in the papers more than anything else. … I was just kind of divorced from it.”

As the flood worsened and caused all schools to close April 11 and 12, Judge Ivedson began to call teachers into court to face contempt charges for defying his injunction. The Associated Press reported that 22 teachers were sent to jail, and the Minot Daily News published a list of 125 teachers who were fired. Larry G. Lane was one of the names on that list.

“Because of how young I was, it didn’t bother me at all, being fired,” Lane said. “In fact, it sometimes gets to be almost funny when we talk about it. … But I have no animosity of anybody or any of it.”

Lane said he went on to work for the government in vocational rehabilitation for 38 years, and that all the other teachers who were fired either left the area to continue teaching or changed occupations.

“Most of the people were young, and they went all over the country. I’d seen them come back, periodically. … I see some of the guys that came from Jim Hill. They’d come up to watch games when they came back in the summertime.” And lingering hostilities would continue long after 1969. “One of them wouldn’t even recognize that he knew [the other man],” and they were good buddies, back in the day.”

Lokken would go on to teach in the Minot school district after graduating from college in 1972, and also became a local and state leader in her education associations, including a term as president of NDEA. She said she was inspired by the bravery of those teachers who made a stand for public education and lost their livelihoods for it. “It was a long-held drama,” Lokken said. “If you were in that group, you weren’t hired back to Minot. But it did send our people into understanding that you had to be united and fight for your rights.”

In 1969, the North Dakota Legislature would pass HB 175, enshrining Chapter 15-38.1 into the ND Century Code, titled “Teachers’ Representation and Negotiations.” This is the legislation that gave public school teachers the right to collective bargaining. The September 1969 issue of the North Dakota Journal of Education reprinted the law in full as a permanent record in NDEA’s official publication, calling it “a giant stride forward in terms of North Dakota teacher-school board relations.”

The Minot teachers strike is seen as a primary impetus to passing this legislation and a major moment in organized labor history for North Dakota. “It caused our people to fight for their rights later on,” Lokken said. “Because they saw what happened to the people who were brave enough to stand up for what they believed in, at such an emotional time in so many ways.”

Lane said he wasn’t aware that the stand that he and his fellow teachers took back then had paved the way for the teachers’ negotiations law, but he’s happy to have played a part in that. His granddaughter, Dawn Bodtke, is finishing her 12th year of teaching in Minot at Longfellow Elementary. “She’s a very good teacher,” Lane said, “and she’s reaping some of the benefits of it, I think.”

Bodtke said that her grandfather didn’t talk about the strike too often, but she did know he had been a teacher. “His mom was a teacher,” she said, “and we would go visit her one-room schoolhouse in Montana. And I just kind of grew up always knowing I wanted to be a teacher.”

While the MFT folded shortly after the strike, the MEA continued on as the exclusive bargaining agent of teachers in Minot. Their local recently finished 2019 negotiations with the Minot Public School board by agreeing on a two-year contract that will raise their base salary $1,300 in the first year, and $1,500 in the second. This year’s process stood in contrast to contentious negotiations in 2018, which ended in impasse. But teachers stayed in their classrooms and continued to work hard at preparing the next generation of North Dakotans for the future, as they have for the past 50 years, in Minot and across the state. This is a testament to how effective the collective bargaining law has been for educators.

“You can already hear a difference in morale this year in Minot Public Schools teachers compared to last year,” Bodtke said. “It wasn’t us against them this year. It felt like we were a united front.”

Thanks to the sacrifice of 125 teachers who lost their jobs in Minot back in April of 1969, and those 22 who were sent to jail for their efforts, North Dakota teachers have since made great gains. While average public school teacher salaries in ND used to rank at the very bottom of the national scale, our state ranked 26th in the Rankings of the States 2018 and Estimates of School Statistics 2019 report released by the NEA.

“Nobody wants to strike,” Lokken said. “It took a lot of gumption. … They knew they were laying down their job. They were threatened, and they went to jail. I can’t thank those people enough for having the guts to go through with it.”