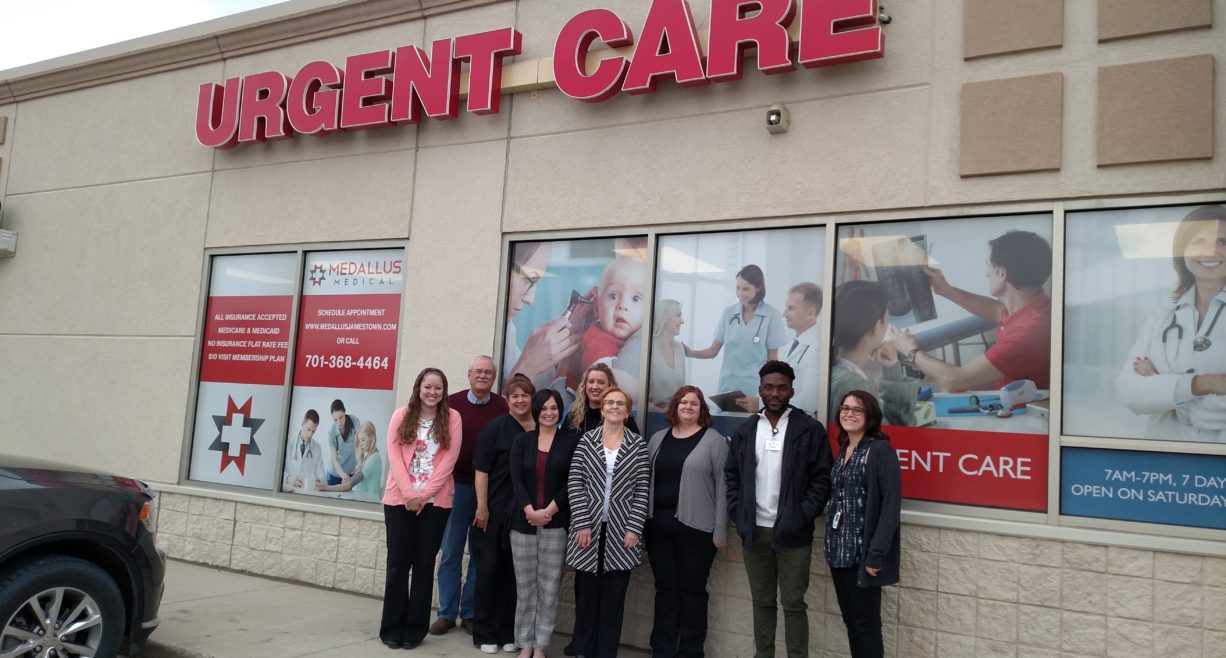 Healthcare is a big, big subject in our country and state. Accessibility to healthcare is a problem, as well as the ballooning costs.

In Jamestown, the members of the Jamestown Education Association (JEA) recognized some problems they were having with their health insurance and accessibility to care. Most prominently, the city of Jamestown had no “urgent care” facilities, which are walk-in clinics that focus on delivering ambulatory care that doesn’t fall under the definition of traditional emergency rooms. Injuries or illnesses that required immediate care, but not serious enough to qualify as an “emergency,” were most often directed toward clinics in either Bismarck or Fargo, which are both approximately 100 miles away from Jamestown.

“We kept hearing from people that they could not get into clinics, how the wait was so long,” said Heather Tomlin-Rohr, a kindergarten teacher and JEA representative on the Health Care Committee. “They were waiting to try to get into a clinic, and whatever was going on with them could be getting worse before they could get medical care. And so, our Health Insurance Committee was brainstorming, what could we do to help our members? We actually worked with a company called Hays Consulting, and (they) started talking about these different organizations, not necessarily schools, but that have satellite clinics right on their campuses.”

Randy Johnson is vice president of Hays Companies, which is a risk-management consulting firm, and was working with Grand Forks Public Schools on their own healthcare cost structure, and was introduced to the superintendent at Jamestown, Robert Lech. “That led to a discussion very early on in 2015, I think it was, as to understanding about the marketplace, access to health-care services and so forth,” Johnson said. “And it was probably our second or third meeting that we had with the benefits committee, and they said, ‘Well, you know, our biggest problem here is that we have limited access and flexibility for getting urgent care in our marketplace.’”

Johnson began to interview health-care providers in Jamestown to better understand the issue, and discovered that there existed a queue for getting urgent care. “That became the impetus to go to a bidding process over a course of about two years,” Johnson said. “We bid it to several vendors to see if they would come to Jamestown and do a shared on-site clinic.”

Most of the vendors that Hays spoke to about the idea of opening a shared clinic in Jamestown were leery, because “in most cases, to make an on-site clinic work, you need to have between five and seven hundred employees,” Johnson said. But in 2016, Johnson approached Dr. Rachot Vacharothone, the CEO and president of Utah-based Medallus Medical with the concept, and he was interested. “So that became kind of the impetus to start the whole process a couple of years ago,” Johnson said, “and then it opened in March of this year.”

The Medallus Urgent Care Walk-In Clinic is now open seven days a week, from 7 a.m. to 7 p.m., at 723 1st Ave. S. The clinic started as the idea of the JEA-JPS Health Care Committee for school employees, but it is also open to the public to use, too.

As part of the agreement made with Medallus, the school district pays for a portion of the clinic’s rent and an $18 monthly administration fee per school district employee from the district’s health insurance fund. Individuals and families in Jamestown with high-deductible insurance plans, which feature low premiums but larger deductibles, can choose to pay a monthly Medallus membership of $50 per person, $90 per couple or $120 per family. That fixed rate and a $10 per-visit fee will cover all services, including tests, equipment and supplies.

“I thought I’d create a program where they can set that insurance aside and pay two dollars a day, so they can get access to the simple stuff,” Vacharothone said.

“Our Health Insurance Fund pays almost like a subscription for each member,” Mickelson said. “So it seems too good to be true to say that it’s free, but the pool of money is paying it. But because it’s such a reduced cost when it comes to actual appointment costs, it’s a benefit.”

A worksite medical clinics survey done by Mercer and the National Association of Worksite Health Centers in 2018 showed that one-third of all organizations with 5,000 or more employees now provide a general medical clinic at or near the worksite. Half of employers who measured the return on investment (ROI) from their on-site clinics reported an ROI of 1.5 or higher. That means for every dollar invested, they have saved a dollar and a half.

“I think an important thing to note is how awesome it is that we were able to bring an urgent-care clinic to Jamestown,” Tomlin-Rohr said. Mickelson agreed, and spoke from her own personal experience how much it has helped her and her family. “I went in and they were like, ‘You told us what was wrong, and how are you feeling right now?’ And they made sure I had everything I needed to walk out and start feeling better. That philosophy was really important when Medallus was picked, they want you to feel better right now, to go in sooner instead of waiting until you’re super sick.”