Taking A Global Perspective 2016 Teacher of the Year Amy Neal visits China as... 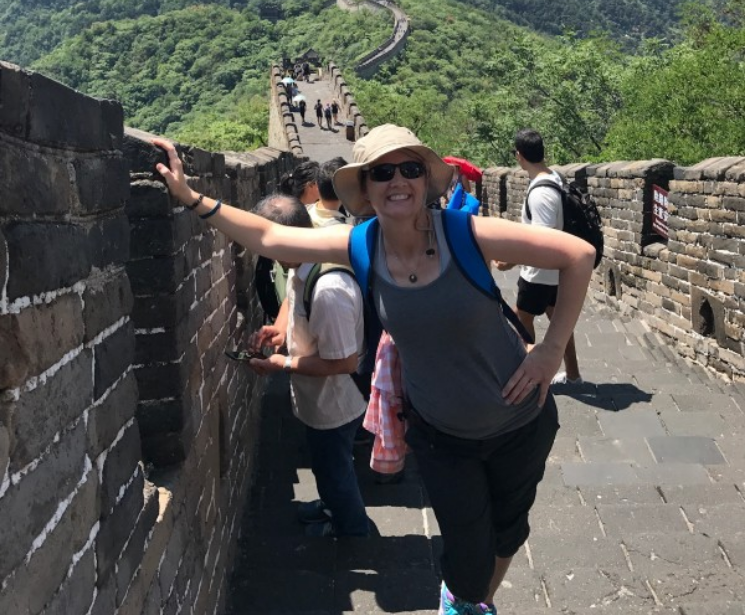 Tiananmen Square, the Forbidden City and the Great Wall of China are a few of the places that a Minot kindergarten teacher visited this summer after being named a National Education Association (NEA) Global Learning Fellow.

Amy Neal, the 2016 North Dakota Teacher of the Year from Lewis and Clark Elementary School, was among a prestigious group that included high school history teachers, math educators, a counselor, a music teacher and a pre-school teacher, on a nine-day trip to China.

Neal also visited a public middle school, a traditional Hutong neighborhood in Beijing, a public market and a mall (which she described as being similar to the Mall of America).

It was exactly the contrast of cultural experiences the NEA Foundation wants its global fellows to experience and take back to classrooms and students in the United States. While the flight from Minot to Beijing took 22 hours, thoughts, ideas and educational experiences can be shared around the globe in seconds.

Neal said the NEA realizes how important it is to teach kids about the world we live in and how connected we are by technology.

“They immerse teachers in a multi-cultural experience so that we have a sense of a little bit of struggle, of how hard it is to understand a different culture and just to have an experience of how can we take a global cultural immersion experience and bring the meaning of it back to the classroom,” Neal said.

The group landed in Beijing (population 21.5 million as of 2016), and Neal said the first day they visited Tiananmen Square — best known outside of China for the 1989 pro-democracy rally called the Tiananmen Square massacre — that ended with thousands of Chinese protesters arrested and an unknown number killed.

Neal said that right next to the square is the capitol building, known as the Great Hall of the People, and close by, the Forbidden City, which they were able to walk through.

Day two, the group visited Wenhui Middle School in Beijing. Neal said one of the top priorities of the trip was to get the teachers into schools to talk to students. She said it’s broken down like an American school system (grades 6–8) with the students immersed in an English language program. She said the students spoke excellent English.

Neal said that was impressive, but what really caught her attention came after a visit with the vice principal. “As Americans, we’re asking how she deals with behavior problems and parents. The vice principal honestly just shook her head. They don’t have behavior problems at their school. Their families put education on a pedestal, and teachers in China are on a pedestal,” Neal said.

She said parents there demand excellence and good behavior from their children. Neal visited with one student whose mother was a doctor and father worked in the military. That student got to go home every day, but because the city is so large, Neal said some students lived nearby during the week.

Another wake-up call came after the teachers spent the rest of the day receiving a designed cultural immersion lesson at an open market, bartering for things like water, and later at the mall where they had to try to overcome the language barrier to order lunch. “I went and ordered something, and I ended up walking back to my table with a plate full of tofu. And I can’t return it! How do you return a plate of food? I don’t know how to explain this to someone who doesn’t speak English. My friend who ordered a rice and chicken meal shared it with me so I didn’t go hungry that day,” Neal said with a laugh.

Neal said visiting the Great Wall of China had been on her bucket list since a college friend had visited. That dream became reality the next day. She said the part of the Wall they visited was about a two-hour bus ride out of Beijing, called the Mutianyu Great Wall, built around 1400 A.D. She said the experience was overwhelming, bringing one teacher to tears. “To stand on the Great Wall and touch some of the rocks, it was honestly like it was alive. You think about how many people built it, and they were slaves or they were peasants who worked for the Chinese government to keep them safe back in the 1400s, and how many people have walked on it since then. It was incredible to me; it was breathtaking,” Neal said.

While on the wall, Neal heard another woman speaking English and approached her. The woman ended up being a kindergarten teacher working in Dubai. The two exchanged email addresses and plan to connect their classes this fall so their students can meet.

Neal also realized the Great Wall isn’t one giant wall across China, but a series of pieces of wall built during different eras. In total, it measures over 13,170 miles. The largest portion, the Ming Great Wall, measures just over 5,500 miles.

Neal’s history lesson continued in central China at the city of Xi’an. She learned it was the original capital of China, and it’s where she experienced the extraordinary story of the Terracota Warriors (built 200 B.C). “After being at the Great Wall, which I thought was the most amazing thing in the world, we go to the Terracotta Warriors, which are 600 years older than the part of the Great Wall that we were on,” Neal said.

“The emperor was Buddhist and wanted to be protected in the afterlife, so he had slaves and peasants build 8,000 life-size soldiers and horses (total) to protect his tomb in the afterlife. They are made out of pottery, and each one took many months to build. They had around 10,000 people working on these warriors and the most interesting part is how they found it in 1974,” Neal said.

A farmer was out digging a well and ran into some broken pottery and decided to call the government. “Archeologists starting digging this up, and they have found 6,000 warriors standing up and they had real copper and brass weapons in their hands to protect the emperor,” Neal said.

She said she thought the Great Wall was overwhelming, but the Terracotta Warriors left her almost speechless thinking of the time and effort put in to create them.

Neal says all of the Global Fellows were asked to reflect on how they will implement what they learned about Chinese culture, history and education in the classroom. She says she plans to build upon a lesson she’s done in her classroom for around 10 years where students say hello in a different language each morning. “We’re going to find that country on a globe, and then we’re going to move into using Google Earth to use the technology side of it because my students need to see a real globe versus what it looks like on a computer. It’s one way I can make it meaningful for my kids and show them some of the hands-on things I brought back from China to show them that kids in a different country look at different letters, they speak a different language and they might wear different clothes,” Neal said.

She also hopes to build upon the connection she made with the kindergarten teacher in Dubai.

Neal says there were several other takeaways from the trip. She said, despite her mishap ordering tofu, the food was fantastic. She also said she shied away from trying scorpions, grasshoppers and spiders sold at a market.

Neal also said she found people in China are extremely conscious of use of electricity and water. One night in her hotel, the electricity was shut off for two hours to conserve energy. China’s population is over 1.3 billion people — compared to around 325 million people in the United States.

Neal laughed as she said the three things she missed the most included air conditioning, ice and porcelain toilets!

A Call to Action

Neal says the Global Learning Fellowship has given her the “opportunity” to challenge her communication skills, comfort level and understanding which she believes will help her relate to students who may feel uncomfortable or misunderstood.

Neal said one of the Fellows summed up the entirety of the experience, saying, “Globalizing our classroom is more than reading a book.”

She said teachers should decide how to bring global competence to their students to cultivate curiosity and learning. Also, she said educators need to bring “a variety of global experiences into the classroom so our students get a global perspective, spark their curiosity and ask lots of questions.”