Students learn just how fun science can be, up close and personal 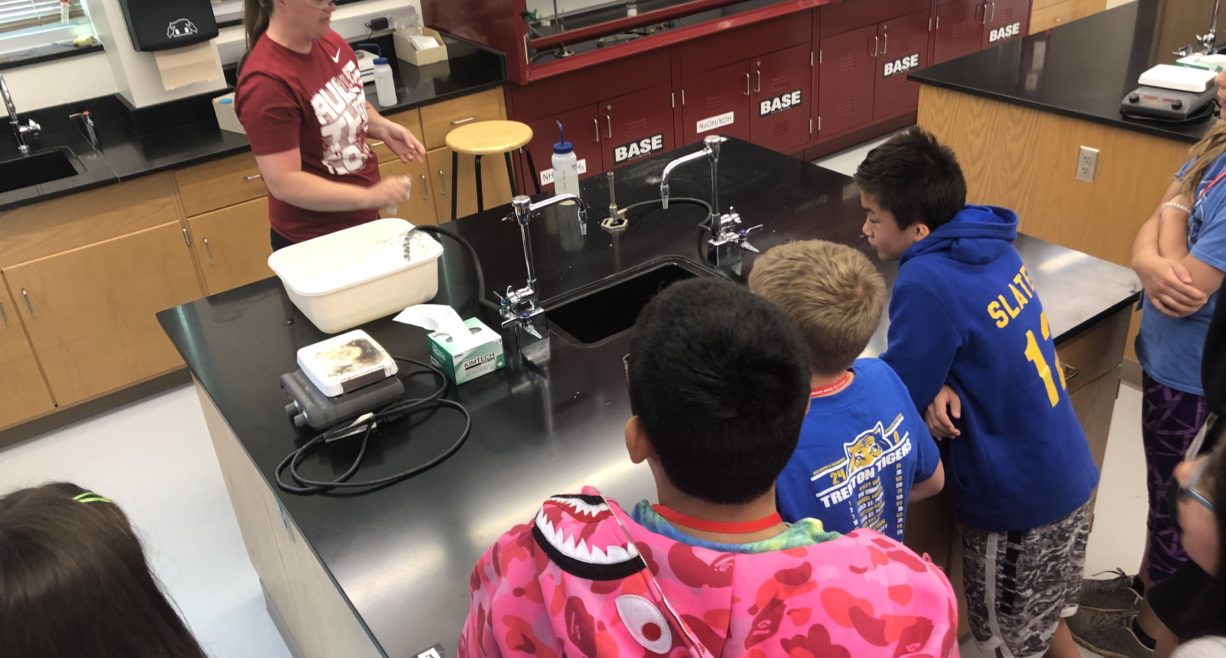 A STEM Academy at Valley City State University is giving some students a jumpstart on college and career possibilities.

With help from The NEA Foundation and North Dakota United, students from New Town and Trenton are participating in the weeklong academy learning about chemistry, biology, mathematics, engineering, computer programming and more.

Students will then come back in successive years to build upon the experiences with the goal of helping them grow socially and academically.

We caught up with a group of soon to be seventh-grade students to provide a snapshot of the academy.

While it’s quiet outside across the picturesque campus of Valley City State University, that’s anything but the case inside the Rhoades Science Center.
These soon to be seventh-grade students from New Town and Trenton are taking part in a STEM academy — with the goal of helping them grow socially and academically.

“Specifically the program started with the schools that are serving the racial and socioeconomic minority students, your under-served students if you will, and we just had a relationship with New Town Public Schools and we talked to the principal and superintendent there, and that’s how it all got started,” Wirth said.

The students work closely with instructors from Valley City State, and there are few dull moments during the week.

“In this one, we did a lot of fire experiments and those are fun. And we made ice cream at the end. We did a burning gummy bear one. She melted salt and she put a gummy bear in there. It made a pink flame. We also got these glasses. As she was burning things, she was putting different chemicals on a Q-tip and burning it, and that was fun because if you put the glasses on you could see which chemicals were which color,” Jordan McMichael said. “Yesterday we did this escape-the-room kind of thing, and there was this box and stuff and we had to figure out codes and stuff to the locks and we had teams and there were some people that I didn’t know on my team so it was really fun to get to meet those people .”

“I’ve always been a really big science person and back in my school we did a lot of coding and stuff and it was really fun so I wanted to some more in the summer,” Alaina Locklear said.

Payton DeCoteau is a New Town Education Association and North Dakota United member. He teaches history and geography and says he would have jumped at an opportunity like this when he was in high school.

“We want to keep pushing these kids more and more and helping them increase their knowledge and showing them that this stuff seems like it’s hard whenever you see it on TV or you hear about kids going to college but you can see that it’s actually fun and it might make them want to do something like this whenever they get older,” DeCoteau said.

Dr. Gary Ketterling is the coordinator for the Great Plains STEM Center. He says technology is changing so quickly it’s important to provide students with skills they need to be flexible along with the rapid changes.

“When we look at 21st Century skills, one of them is collaboration. Students from these two schools have to collaborate and work together. And then we have to be creative. When they were doing photosynthesis downstairs they created an actual experiment and it’s fun to see the questions they come up with. The other is communication which is everybody needs to communicate and this is helping that come along and the other is critical thinking — how do you solve a problem and come up with a solution to it,” Ketterling said.