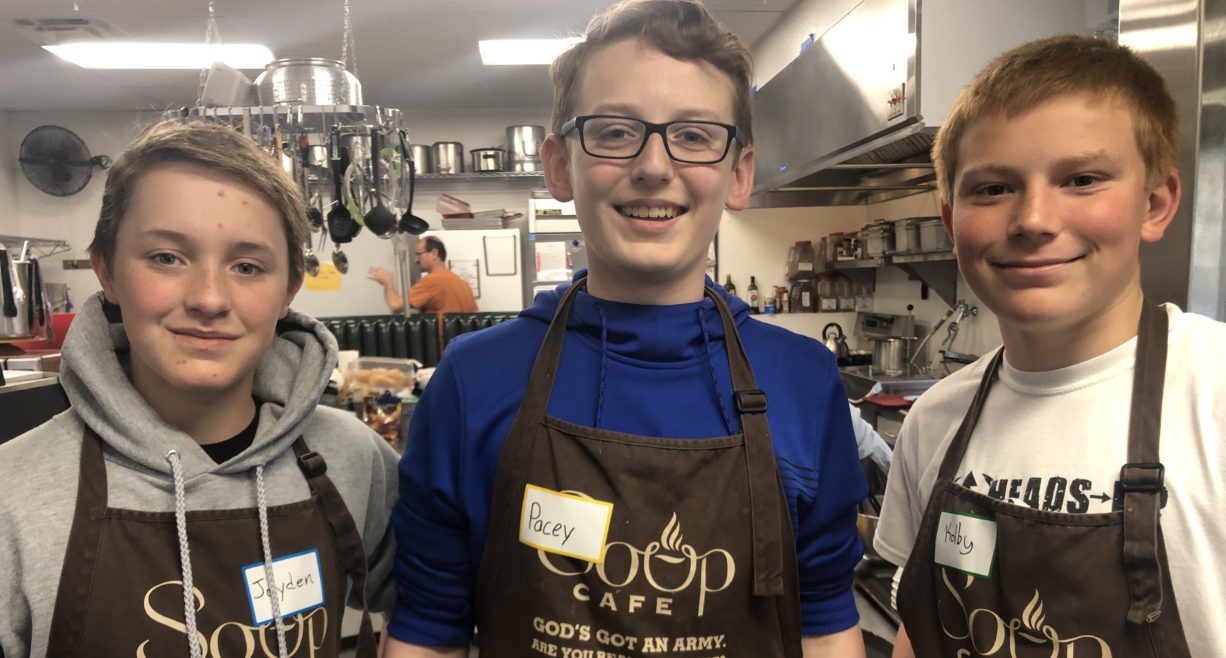 Simle Middle School in Bismarck introduced “flex days” to students this school year. There have been ups and downs, but the idea is to give students a handful of days through the school year to engage in subjects and projects they they’re passionate about.

It’s a student-driven learning environment where the students step outside of their comfort zones and develop skills like collaboration, communication, critical thinking and creativity.

The “flex days” provide time to dig in to topics leading up to the release of a final project—presented to the public—at the end of the school year.

When the doors open to Ministry on the Margins, hundreds of people enter. They serve over 800 people each week.

The same is true at the nearby Heaven’s Helpers Soup Café. This day, they provided food for over 1,300 people.

What you may not expect to see — a team of eighth graders from Simle Middle School in Bismarck. They’re here volunteering, the result of a passion project allowing the three students to focus, learn and engage in topics important to them.

“My mom, a couple of years, ago she brought me into Ministry on the Margins,” Jayden Ahmann said, “and that’s what kind of got me thinking about this, and I was like these people are coming to these every week struggling for food (and obviously this isn’t the highest, greatest quality food ever) and they’re kind of just skimming by with what they can. And I realized I can go home right now, I can pull out a box of Cheez-Its or whatever and I can sit there for hours on end on my fancy phones and stuff, just eating, and these people are going home not a single minute of rest they can get because they are out trying to take care of their families. That really just got to us, that these people are living in these situations.”

Ahmann, Kolby Erhardt and Pacey Kutzer are putting together a mini-documentary on homelessness and hunger. They want to open the eyes of others — especially their peers. They’re spending a lot of time outside of traditional classrooms to do it.

“We’re learning about a lot of different life skills and learning a lot about the world around us instead of sitting down at a desk and watching a teacher talk and then watching videos and taking a test and studying and doing other assignments,” Erhardt said.

North Dakota United member Andrea Weikum is the educator helping to guide the three through this project.

The students have learned a lot about homelessness and poverty. Mental health experts have told them a variety of circumstances can lead people to slip through the cracks of society, including addiction, mental and physical illnesses and lack of support structures like friends and family.

The boys say they can’t look the other way.

“I think all we really can do is spread awareness and help as much as possible with volunteering and helping at homeless shelters and donating what we can and what we need to to help those people out and get them affordable housing for where they can be,” Erhardt said.

“If they can take, like Colby said, like five minutes to see what’s going on outside of the NFL or MLB,” said Ahmann, “or whatever we like to go home and watch, that it can give more awareness because in my opinion I think that everybody should get out and do a little bit of service, whether it’s an hour, hour and a half out of your month, it helps so much because it gives you this awareness towards what’s really happening.”

Whether it’s a hot cup of coffee, or a hot bowl of soup, Jayden, Kolby and Pacey have been learned and grown through the experience.