Officials, teachers and community members are invited to talk about concerns and ideas at series of six listening events across the state 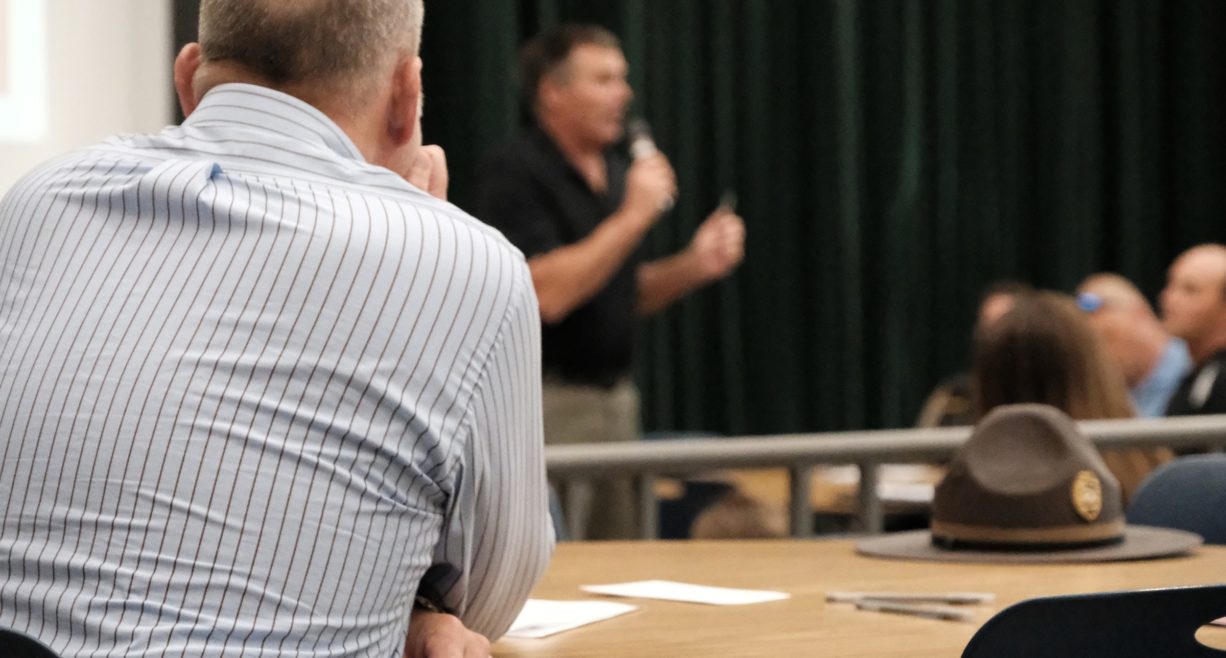 Safety in our schools is a big subject, in breadth and in intensity. Because a majority of every community in North Dakota holds some stake in our schools, as parents, grandparents, family or friends of students, teachers and staff, we all want our institutions of education to be safe places, for kids and adults, alike.

With that mission in mind, North Dakota United has partnered with the North Dakota Department of Public Instruction and several other stakeholders to present a state tour of six School Safety Community Listening Forums in August.

The first stop in Bismarck on Tuesday, Aug. 14, at Horizon Middle School was a good start for this important topic of conversation. Representatives from ND United, DPI, as well as the Governor’s office, the Highway Patrol, the ND Council of Educational Leaders (NDCEL), Small Organized Schools, the School Boards Association, Association of Counties, Department of Human Services and Department of Homeland Security – Emergency Services were all in attendance. Additionally, members of the Bismarck Education Association made up approximately a third of the audience.

Kirsten Baesler, North Dakota’s superintendent of public instruction, said she was pleased with the public participation in the forum. About 40 people attended, including officials who were there to answer questions.

“I think people came with honest questions and very honest concerns and suggestions,” Baesler said. “I think we can do even more to encourage that, and make people feel comfortable and safe.”

The idea for these forums first came from a discussion between Baesler and ND United executive director Chad Oban earlier this year. “After the Parkland shooting in Florida, I had a conversation with Superintendent Baesler where we discussed the unease in our communities and classrooms after incidents like this,” Oban said. “We talked about the upcoming legislative session and the need to have thoughtful conversations about what is being done and what should be done to keep our kids and school staff safe. Baesler and her office very quickly convened a group that included not only education stakeholders but also folks from law enforcement and human services to start the conversation. Superintendent Baesler deserves a lot of credit for leading on this issue.”

The format for these forums was designed to maximize audience participation. Aside from a quick introduction from Darin Hanson, critical infrastructure program & security manager at the North Dakota Department of Emergency Services, the floor was open entirely to questions and comments from anyone in attendance.

“I do think there was a well-rounded balance of suggestions, concerns, affirmation of what’s going on, and a deep desire and interest to make sure that we’re covering all aspects of student safety, from mental health issues to active shooters to secure buildings and secure and safe classrooms,” Baesler said.

One of the NDU members in attendance, Lyndsi Huber, spoke about behavioral health issues in our classrooms. “After our (contract) impasse at Bismarck Public Schools (in 2017), we did establish a Health and Safety Committee,” Huber said, “and I’m on that committee. Bismarck has started collecting data to see where trends are heading, see what kids are doing, see where it’s happening and why it’s happening, and what the outbursts are looking like.”

From the data that the committee has collected so far, out of 343 safety-concern incidents, approximately 80 percent happened with dysregulated students.

“These are students who are emotionally or behaviorally challenged, or having a struggle,” Huber said. “We have it broke up into categories, so it would be verbal, physical aggression; verbal threat, physical threat; destruction of property; risk to self or student becoming a risk to themselves, be it they were climbing on cabinets or running out into the road, things like that. The biggest one, about 70 percent, was physical aggression toward either a peer or an adult, a teacher. Those are things we need to focus on, and we do have great support from the district, with the school board coming forth. We’re really in the infant stages of knowing what this all looks like.”

One of the questions posed from the audience was how many out of the 80 school resource officers (SROs) in the state were based in a rural school setting? Superintendent Baesler answered that question, saying, “Twelve in the rural communities, which would be classified as Class B schools. So there are 20 Class A schools, and the majority of our SROs are located in our Class A school system.”

One of the teachers in the audience, who did not give his name, talked about the need for more support in our rural schools. “I’m a teacher in a small district, and if this is a listening forum, hear me,” he said. “I keep hearing at the legislative session that it’s a mental health issue, and it is. But we’re powerless to do what needs to be done. And that needs to be changed, not here in this room, but at the Capitol. The other thing I wanted to mention, is … I want an SRO in my building. I think we’re making great steps in the right direction. We have the Highway Patrol come by a couple times a week, but only for about 30 minutes and oftentimes they just sit in their squad car, out front. They don’t come in. The county sheriff comes once in awhile. But that’s not a replacement. It’s a good step in the right direction, but that’s not a replacement for an SRO in my building. And during the legislative session, we want security, we want mental health, we want the same thing. We all want safety and the best for our kids.”

Oban urged those in attendance in Bismarck and at the five future stops on this listening tour to think about the entirety of what school safety means. “Those of us involved in the planning really need and want to hear from the community about what is happening and what they are concerned about,” he said. “It can’t just be a conversation about what happens when someone has a gun in school but what are we doing in the state to make sure kids never get in those situations? What are we doing to make sure kids, even before they are in school, get the services they need? What are we doing to make sure the staff and students are safe everyday? What are we doing to curb the issues that lead to suicide and other issues in our students? It is clear we are not doing enough. We can not afford, as a state, to take the easy or cheap way to solve these problems. If we care about our kids, we must do more as a community.  Teachers, public workers, parents and other leaders must be part of this conversation.”

The superintendent said she wanted to encourage participation by teachers and administrators in future forums, which will be held in Dickinson, Williston, Fargo, Valley City and Rugby.

“Our North Dakota teachers, principals and administrators are there in their classrooms every school day, and they have ideas on how to make their schools safer,” Baesler said. “We need to hear from the people who are closest to the issue.”

All of the forums will begin at 5:30 p.m. local time and end at 7 p.m. Below is the schedule for the five remaining listening forums: