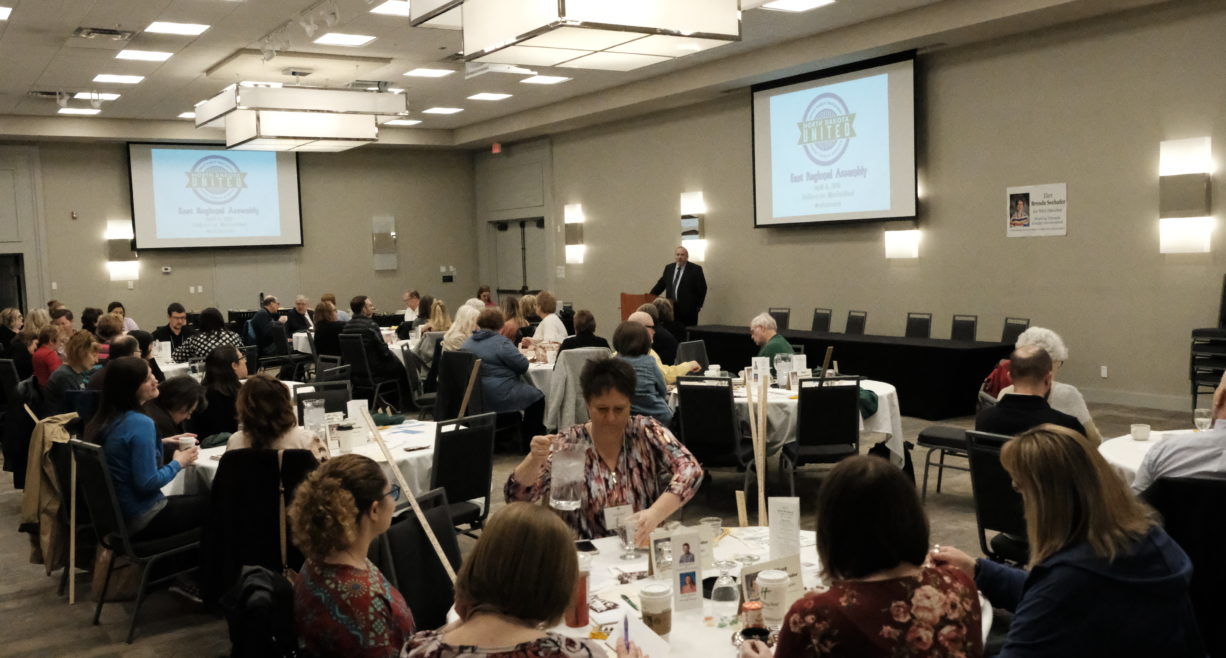 North Dakota United exists because of our members. All 11,500 members of our union can help to decide the direction our organization takes, through their ability to run for a leadership position, and by participating in our yearly Delegate and Regional Assemblies.

In 2019, ND United held two Regional Assemblies, in Fargo on April 6, and in Bismarck on April 13, as is required by our constitution in the years opposite of our biannual Delegate Assembly. Elections were held for officer positions – president, vice presidents of education and of public employees, and for NEA director – as well as for the delegates our state will send to represent our state at the National Education Association’s Representative Assembly in Houston this summer. In addition to holding elections, Regional Assemblies are meant to be training and professional-development events.

President Nick Archuleta opened both assemblies with his remarks about the strong state of our union. He noted that the month of April marks the 50-year anniversary of teacher strikes in Minot that ultimately led to the collective-bargaining law for teachers that our state has followed dutifully since.

“They were protesting over salaries and underfunded schools, just like the teachers have done recently in West Virginia and Kentucky, Oklahoma and Arizona, and Colorado,” Archuleta said. “Those teachers in Minot didn’t have the right to strike, but they had the moral imperative to what was right by their students, their colleagues, their profession and their communities. The result of their actions was the collective bargaining law that allows teachers to bargain for the terms and conditions of their employment, today. Therefore, we must care about creating active, strong and supported locals and chapters.”

At both assemblies, local legislators participated in panels, to talk about the current session of the Legislature and their efforts to benefit public education and public services in our state. In Fargo, the panel consisted of Sens. Tim Mathern, Kyle Davison, Jim Roers and Kathy Hogan; and Reps. Cynthia Schreiber-Beck, Brandy Pyle, Shannon Roers-Jones and Mary Schneider. In Bismarck, our panel was made up of Sens. Erin Oban, Nicole Poolman and Dick Dever; and Reps. Josh Boschee and George Keiser. NDU executive director Chad Oban served as moderator for both panels.

President Archuleta was joined at both assemblies by Tom Gerhardt, NDU’s director of public affairs, to present a live and in-person version of the NDU Legislative Update. Andrew Bushaw, the field director for North Dakota AFL-CIO, joined with NDU assistant executive director Ryan Nagle to provide organizing training, and with NDU communications director Kelly Hagen to offer communications training. An ND Public Employees Retirement System (NDPERS) update was given in both locations, by NDPERS executive director Scott Miller in Fargo and by chief operating officer/chief financial officer Derrick Hohbein in Bismarck. And Alicia Bata, member of the NDU Board of Directors, led training on racial justice and implicit bias at both assemblies, with assistance from NEA.

Both assemblies were well attended by locals, large and small, from all of our constituencies, K-12 teachers and education support professionals, higher education faculty and staff, public employees, students and NDU-Retired members. Thank you to all in attendance. We, North Dakotans from the eastern and western haves of our state, were ND United once again around our shared mission of providing everyone in our state the best education and public services possible!