Decisions made by lawmakers can alter the course of your career and life. 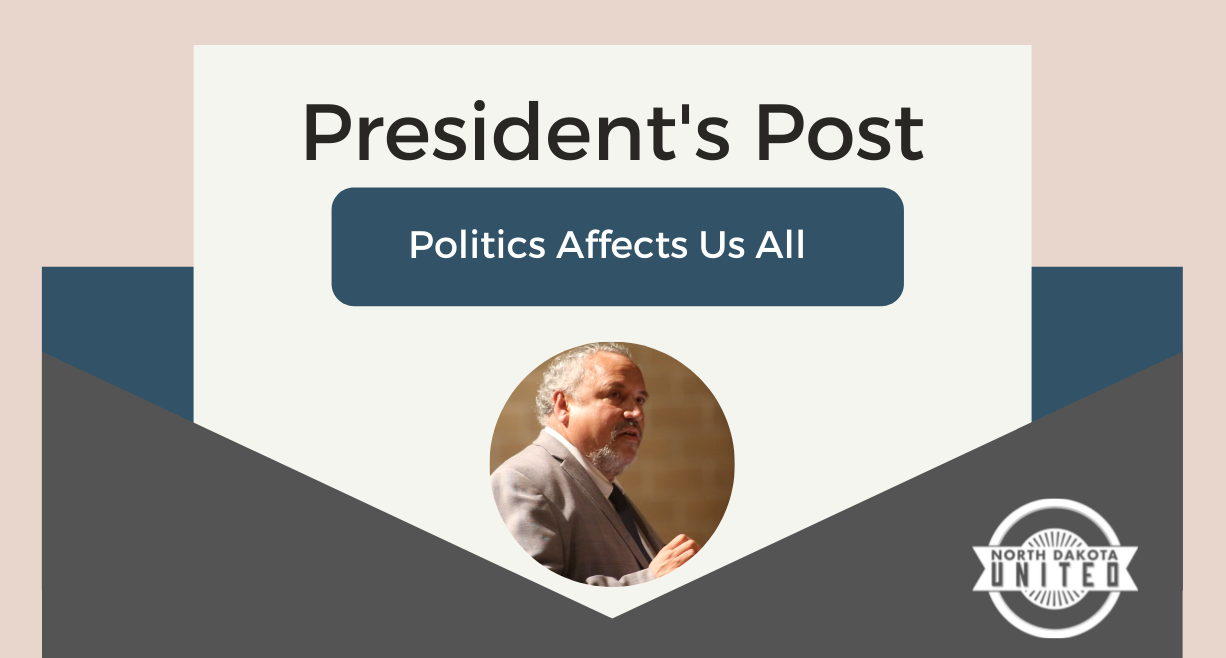 One thing I hear often from friends, relatives and even some of our members is that they hate politics.

They tell me that they are sick of the partisanship, the vitriol and the politicians themselves. One friend went so far as to share with me what he sees as the etymology of the word “politics.” He said, “Politics is made up of two words: Poly, which is Greek for ‘many,’ and tics, which are blood- sucking parasites.”

What is clear is that he is not alone in his assessment of the current state of our political environment.  given what we have witnessed in recent years, it is easy to understand why people are cynical about politics. But we cannot allow our cynicism to cause us to disengage from the political process.

Every single decision that affects the lives and livelihoods of public employees is a decision made in Washington, DC, or Bismarck, ND. That said, then, it is vitally important that public employees engage in the process whose results dictate.

During the recently concluded 67th Legislative Assembly, we saw a continuation of legislative efforts to pass legislation that was not in the best interests of ND United members and other public employees.

ND United had to fight off three voucher bills that would have sent public dollars to private institutions and those who do not avail themselves of public education.

We derailed a plan that would have ended the defined benefit retirement plan for state employees. We successfully battled to improve a bill that altered the longstanding collective bargaining law.

ND United had to lobby exceptionally hard for a nominal increase to the K-12 funding formula. Looking ahead, we do not see those challenges abating any time soon, so it is exceptionally important that we remain engaged in the important work of influencing policy.

To that end, ND United is currently developing plans to increase the opportunities our members have to increase their activism. It is my fervent hope that our member activist numbers will increase, and our voices will be amplified.

Finally, it is important to note that this is not about Democrats or Republicans, it is about taking action to advocate for great public schools, public universities and public service. As John F. Kennedy said, “Let us not seek the Republican answer or the Democratic answer, but the right answer. Let us not seek to fix the blame for the past. Let us accept our own responsibility for the future.”