I rise today in opposition to SB 2215 and to respectfully urge a DO NOT PASS recommendation on this completely unnecessary proposed legislation. 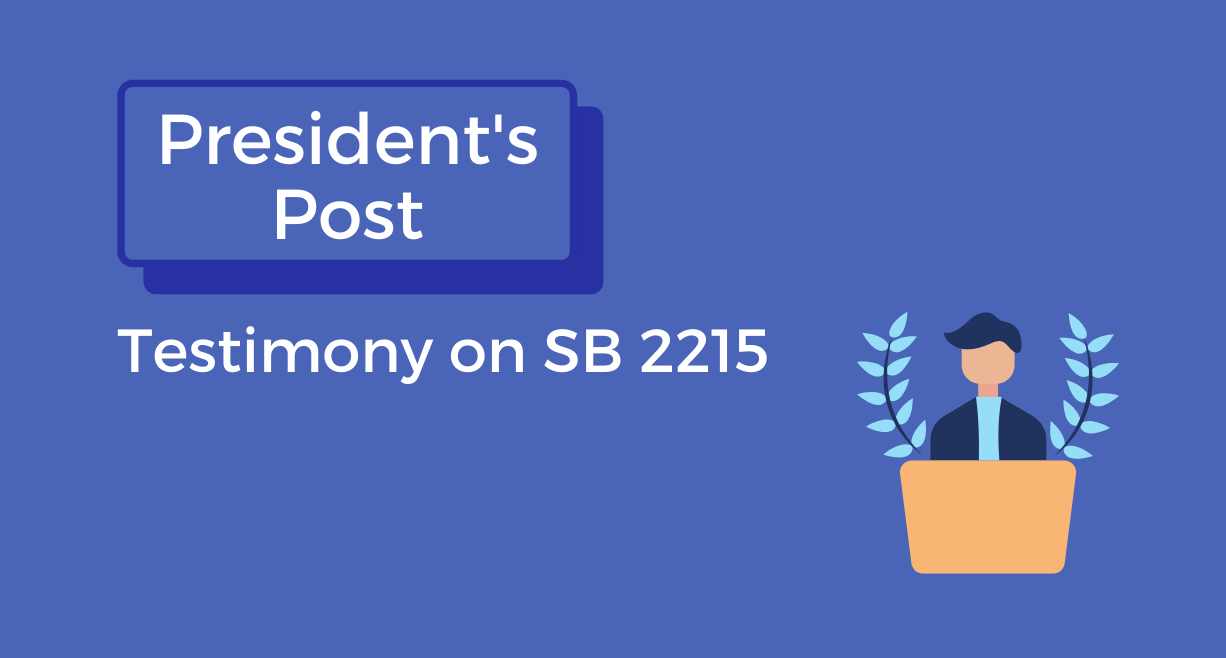 Good morning, Chairman Schaible and members of the Committee. For the record, my name is Nick Archuleta, and I am the president of North Dakota United. ND United is a union of professionals, including K-12 classroom teachers, dedicated to great public schools and great public service.

I rise today in opposition to SB 2215 and to respectfully urge a DO NOT PASS recommendation on this completely unnecessary proposed legislation.

Mr. Chairman, I want to begin my testimony with a brief history of collective bargaining in North Dakota.

On March 28, 1969, the Minot School Board moved to issue teachers’ contracts in a special session by formally terminating negotiations between the teachers and the board. Negotiations had broken down several days earlier, with teachers unhappy over a decreased rate of a salary increase. Their superintendent was instructed by the Board to issue contracts with a $6,000 base salary and a revised salary schedule which reduced the number of lanes from ten to six.

Teachers were feeling additionally frustrated at how quickly negotiations were terminated.

In comments to the Minot Daily News, Rudy Zupetz, then-president of the Minot Federation of Teachers, said,

“We could have arrived at a more satisfactory agreement, I believe, had the board’s team not insisted upon winding everything up Friday night. They felt they could not keep the news media waiting upon further negotiations.”

According to a news release from the Minot Federation of Teachers, the teachers requested that “negotiations with the Minot School Board on several matters, including teachers’ salary schedule, employment security and restoration of educational programs such as remedial reading and elementary music,” be reopened.

Trading off headlines, splashed across the front page of the Minot Daily News, were stories about the strike and of a catastrophic flood of the Souris River in Minot. The state legislature, which was meeting in Bismarck, realized that what was happening in Minot was a harbinger of what was likely to play out across the state unless it established guidelines governing negotiations between school boards and teachers.

“Teachers who have lived and taught in communities for a lifetime are putting jobs on the line in an effort for better salaries, which they strongly maintain will result in better education for their community’s children.”

The implementation of legislation acknowledging the right of teachers to collectively bargain the terms and conditions of employment was hailed at the time as a giant stride forward in terms of North Dakota teacher and school board relations.

This right did not come without a cost, however. Judge Roy A. Ivedson began to call teachers into court to face contempt charges for defying his injunction “to restrain and enjoin the teachers of the public schools of Minot from engaging in a strike.”

The Associated Press reported that 22 teachers were sent to jail, and the Minot Daily News published a list of 125 teachers who were fired.

When I think of these teachers, Mr. Chairman, I think of heroes. They risked their jobs, their livelihoods, and their security to raise their profession and to improve the education environment for their colleagues and students.

Their actions brought to light an emerging issue and the 44th Legislative Assembly sagaciously responded with a law that has served teachers, administrators, and school boards quite well since, with few exceptions.

Any changes to the collective bargaining statute in North Dakota should serve to make things fairer for all parties. Not only does SB 2215 fail to do so, but it also only serves to exacerbate a serious flaw in the legislation. That is, SB 2215 further disadvantages teachers by making the field less level.

That is, SB 2215 further disadvantages teachers by making the field less level.

The North Dakota Supreme Court has recognized the inequality in bargaining power between teachers and school boards on at least three occasions.

Chairman Schaible and members of the Committee, please consider the following points:

Placing a deadline for the declaration of impasse, which SB 2215 does, simply adds to the existing unequal bargaining power of a school board.

The situation that developed in the Fargo School District in 2019 is the first time that legal action was ever taken regarding the declaration of impasse. The District Judge dismissed the case, not on the merits, he dismissed it because Fargo Education Association had another remedy in the form of the Fact Finding Commission.

Placing a deadline on the declaration of impasse runs contrary to N.D.C.C. § 15.1-16-13(4). Pursuant to this section, school boards and teachers shall meet at reasonable times and negotiate in good faith regarding the terms and conditions of employment, employer/employee relations, formation of a contract which may contain a provision for binding arbitration, and the interpretation of an existing contract.

Nothing in subsection 13 “compels either the board of a school district or a representative organization to agree to a proposal or to make a concession.” Proposing a deadline to declare impasse forces teachers to either make concessions to school board proposals or risk the potential that impasse will be declared.

Proposing a deadline to declare impasse forces teachers to either make concessions to school board proposals or risk the potential that impasse will be declared.

By proposing a deadline on declaring impasse by June 1, school boards are encouraged to slow walk negotiations until June 1st to declare impasse and turn negotiations over to the ND Fact Finding Commission, whose rulings are not binding on school boards.

No student’s education has ever been negatively impacted by negotiations which have continued beyond June 1st. Teachers and administrators have always continued to work in the best interests of our students regardless of the status of their negotiations.

There has never been an exodus of teachers from a school district because negotiations went beyond June 1st. Those returning teachers all have continuing contracts with the school district which is a guarantee of employment for the next school year.

Teachers who leave, though very few do, run the risk that they will not be employed during the next school year. Most teachers have some type of contact or connection with the community which prevents them from being overly mobile.

School Boards are not disadvantaged in any way by extended negotiations. An argument can be made that teachers are disadvantaged because if they receive pay raises during negotiations, and the school district commences, they will not receive that extra compensation until negotiations have been concluded.

It is well known that the months of April and May are the busiest for teachers as the school year is winding down.

At those times, to require that negotiations be completed by June 1st, simply adds to the stress teachers will experience during the last few weeks of May. It is much better to allow negotiations to go into the summer when teachers can look at and contemplate the proposals made by their school board, and vice versa.

To require that negotiations be completed by June 1st, simply adds to the stress teachers will experience during the last few weeks of May.

Chairman Schaible and members of the Committee, in the eyes of our members, SB 2215 is, at best, a solution to a problem that does not exist.

At worst, it is seen as a cynical attempt to further weaken the hand of teachers as they negotiate the terms and conditions of their employment.

Our members agree with the ND Supreme Court that even before the parties sit down to negotiate, school boards have the upper hand. SB 2215, should it become law, would further put the heavy thumb of the state on the scales of just negotiations in favor of the school boards. That is the antithesis of “the light touch of government.”

SB 2215, should it become law, would further put the heavy thumb of the state on the scales of just negotiations in favor of the school boards. That is the antithesis of ‘the light touch of government.’

The way SB 2215 came to be is analogous to my daughters when they were in middle school.

On occasion, my daughters would have a difference of opinion that turned into an argument. Inevitably, one would appear before my wife and I, make their case, and expect us to intervene on her behalf, without ever getting the other side of the story.

Usually, we did not fall for that ploy. We would seek out the other side of the story before deciding on a course of action. Often, we would tell them to try to work it out on their own before asking us to decide, because neither of them was likely to be entirely satisfied with what we had to say. That proved to be an effective plan. They learned not to run to us when they have not attempted to work out their differences with each other.

That is what happened here. The School Boards Association, on behalf of the Fargo School Board following a contentious negotiation, came to the state of North Dakota to solve a problem that it had not tried to solve locally.

Rather than trying to ascertain all the facts or telling the NDSBA to try to work it out between the parties involved, the state, should SB 2215 pass, will unilaterally intervene in a local matter, further ignoring the principle of local control.

Should SB 2215 pass, the state will unilaterally intervene in a local matter, further ignoring the principle of local control.

Chairman Schaible and members of the Committee, ND United released a poll two weeks ago that revealed that where once 83% of educators planned to retire as a teacher when they began their career, now, just 50% of new educators plan on spending their entire career in teaching.

Educators attribute this dramatic drop to increased pressure and job burnout. They have been paying attention to what has happened in the legislature over the course of recent sessions. They have seen the time allowed for them to accept their contracts shrink from 30 days to 14 days.

They have seen any number of voucher schemes introduced that, if passed, would divert dollars raised for public purposes, including K-12 education, to private schools, parochial schools, and homeschools.

They have seen the value of the licenses they worked hard to earn devalued by alternative licensure policies.

Finally, Mr. Chairman teachers deserve respect. They deserve dignity. They deserve a fair shake at the bargaining table. SB 2215 falls far short in delivering any of those.

For these reasons, Mr. Chairman, I urge a DO NOT PASS recommendation for SB 2215. My testimony is concluded, and I am happy to answer any questions you may have, if I am able.