Here’s a poem that my high-school science teacher in Wilton used to recite to us:

The grass is ris’.

I wonder where all the flowers is?

Well, here the Legislative Report is, if you’re still out there, Mr. Schafer.

First off, why don’t you take a moment or eight, and check out the NDU Legislative Update, featuring President Nick Archuleta and Public Affairs Director Tom Gerhardt? You’ll thank me for doing so. It was a busy week, and I’ve even got a couple important updates on the things they mentioned from Friday.

Ready to thank me? No? That’s fine; most people don’t. Time to Legislative Report!

State employees, and higher education faculty and staff, certainly know this, but those workers’ yearly raises are determined each session of the North Dakota Legislature, and in the previous session, legislators chose to not give raises to public employees for the biennium we’re in currently. We all know that costs of living didn’t freeze, too, so our state employees and higher ed personnel have been moving backwards for the last two years. It’s time for that to end, and for our public workers to receive an overdue increase in compensation.

The Senate and House Appropriations Committees have been discussing competing plans for pay raises. The Senate had called for 2% increase in the first year, and 3% increase in the second year. The House has countered with a plan consisting of a 2% increase in the first year, with a minimum of $120 per month, and a maximum of $200 per month. Close to 80% (79.5 or 5,504) of employees will benefit from the minimum, while only 46 people will see their increase lowered by the max. Those statistics only include state agencies, and does not reflect higher education. In the second year of the House’s plan, employees would receive a 2.5% increase, with no minimum or maximum amount.

This negotiation on state employee compensation is still very fluid, and could potentially keep changing until Sine Die. So stay tuned and, in the meantime, enjoy this picture of our own Tom Gerhardt led his Lobbyist 2 team to a second-place finish at the Capitol City Classic XV yesterday! Eight teams participated, including elected officials, lobbyists and the media. Together, they helped to raise over $10,000 for the Special Olympics! Nothing but net! 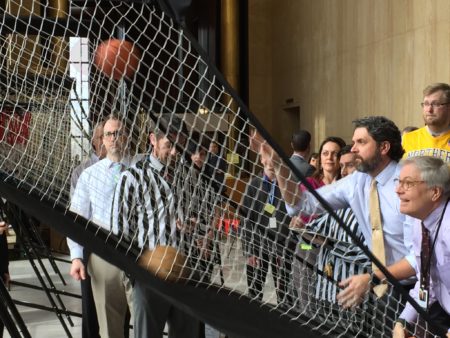 HB 1206 was a bill “relating to possession of a concealed firearm or dangerous weapon at a public gathering.” This would have included schools, sporting events, public universities, churches, etc. “We asked that an amendment be put in,” President Archuleta said, “and it was to exempt college campuses and high school football games and other events and whatever else. Churches were left out at first and they were put back in. All those amendments went in and then after they looked at the bill with the amendments, they decided that this really didn’t offer much clarity. And so they voted to kill it.” The committee gave “do not pass” recommendation, by a vote of 5-1. The bill went for a floor vote yesterday, and it failed, 11-36.

However, it’s not completely in our rear-view mirror quite yet. “I think we’re going to see some iteration of this bill in another piece of legislation that I think has been held specifically in case this one was killed,” Archuleta said. “So we’re not finished looking at it, even though this was very good news today.”

As of Friday at 12:45 p.m., when we posted our Facebook Live video of Nick and Tom discussing the state of this bill, President Archuleta had this to say about HB 1332, which would allow trained personnel to carry concealed weapons on school grounds: “We have worked with Rep. Heinert to make sure that this armed first responders bill has language in it that says that when a teacher or an administrator is in a school building in charge of children, they cannot be that armed first responder. We still don’t support the bill, but we do believe that this is probably that best gun bill we’ve seen in the last several sessions of the Legislature. … There’s a lot of work left to be done on it.”

Later that afternoon, HB 1332 went up for discussion and a vote on the Senate floor, and it passed, 31-14. The bill will allow schools to develop a plan, which must be approved by local law enforcement and the Department of Homeland Security, to be submitted to the North Dakota Department of Public Instruction, for an “armed first responder,” who cannot be anyone with direct supervision of students. There are rigorous training requirements, and the bill was amended to keep these plans confidential. 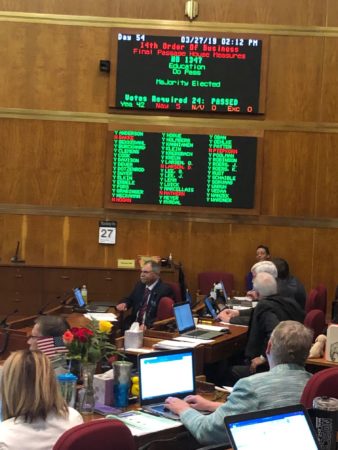 Good news! We won on HB 1347, the bill to increase the probationary period for teachers! Kind of!

Here’s what happened. The bill went up for discussion and a vote on the Senate floor this past Wednesday. Sen. Erin Oban (35-Bismarck) proposed an amendment, reducing the probationary period from three years to two years. A lively debate ensued. Sen. Nicole Poolman (7-Bismarck) called the amendment a “reasonable compromise” and pointed out that, if the original bill had been in place when she started in education, she would have spent her first nine years in probation, as those three years start over again when you transfer districts. And then self-professed “great teacher” Sen. Oley Larsen said, and I quote, “Most of the jobs I hold, and keep, I’m on probation every day. Because if I lose my edge, I’m out of there. Teaching is the only profession where, if you lose your edge, you’re there until you retire.”

A vote was taken on the amendment. It passed, 33-14. Then the new bill, requiring only two years of probation for new teacher hires, went up for a vote, and it passed, 42-5.

“It was a terrible piece of legislation when it was introduced,” President Archuleta said. “It had provision after provision of taking away your workplace protections during this probationary status. It was horrible and the first iteration of it in the House, we were able to get all that bad language stripped out, but it’s still left with that tripling of a probationary status of a teacher from one year to three. There was no factual evidence presented that three years was a magic number or that one year wasn’t enough. … We asked that it would be turned into a study. That idea was rejected. So, off we go to the Legislature. … So it’s two years and that was the best deal we were going to get, and in fact, is the deal we got.”

I just so happen to have a roll call for the amendment to this bill, reducing the three years of probation to two. It’d be great if you could look through the list, find your district’s senator, and send them a note of thanks if they voted “yea” on the amendment. Or a note of disapproval if they voted “nay,” but please be polite. We are all adults, as are they, and we should be able to talk to each other about our differences, without insults, like adults do.

HB 1347 was part of a disturbing pattern, of insufficient efforts to combat the teacher shortage we are seeing in our state and across the nation. “Here’s the thing: We have to have an adult, grown-up conversation about the teacher shortage,” President Archuleta said. “Bills like this, and bills like those alternative licensure things, all they do is they diminish the profession, and we can’t have that. It doesn’t do one thing to encourage people to go into the teaching profession, and it doesn’t do one thing at all to mitigate the teacher shortage. So, when they’re ready to have a conversation, we stand ready to help provide evidence and figure out how it is we are going to make sure the best and the brightest are going into public service including the teaching profession.”