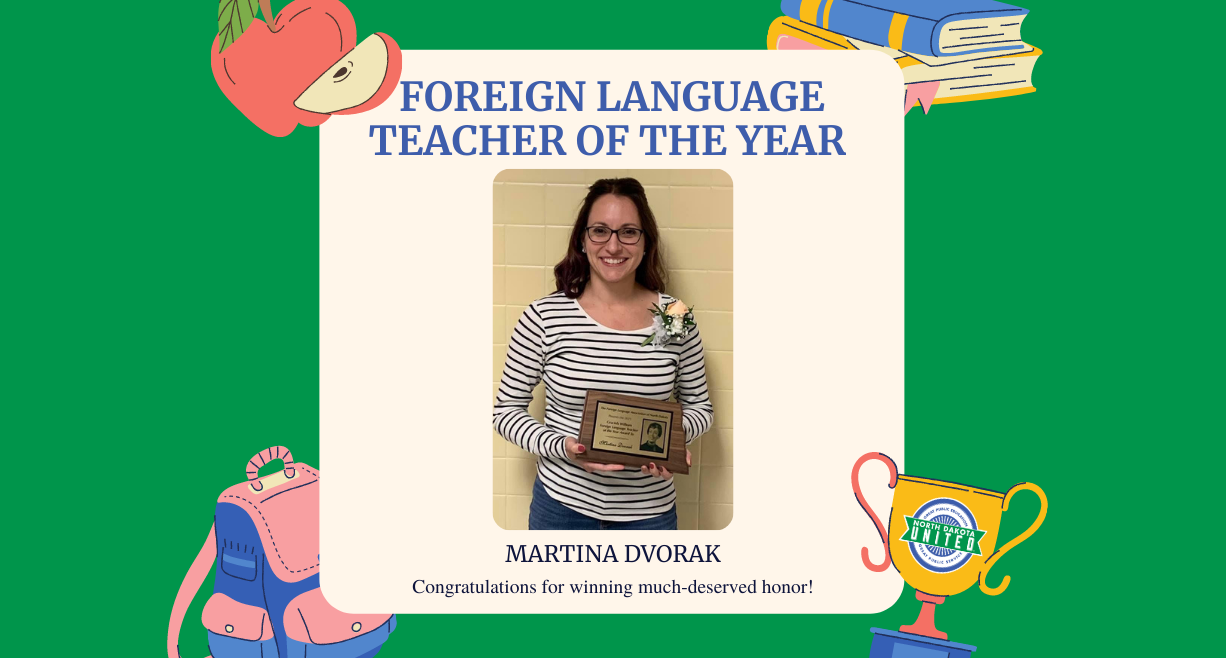 Winners of this award, which has been given out annually by FLAND to a “teacher who excel(s) at their profession and share(s) the love of learning a language with their students and communities” since 1986, are first nominated, usually by a fellow foreign language teacher. Dvorak said that she was nominated by her high school Spanish teacher, who also taught through ITV.

“Senora Meidinger was my nominator,” Dvorak said, “and I made the joke that she never did mention how good of a Spanish student I was in her class. But I probably wasn’t the greatest back when I was a freshman or sophomore.” “My job is a lot easier than hers was at the time. Now my students can contact me in a second with email or Remind, they can take pictures of assignments, I can grade scanned homework as PDFs on my computer screen, there’s no more faxing and mailing tests and homework assignments.”

Dvorak grew up in Center, ND, and was raised by parents who both taught German at one point. Their influence was instrumental in her decision to pursue a career in teaching a foreign language. “My dad was the German teacher at the school when I was there,” she said. “So, I obviously took Spanish because I don’t want my dad for a teacher, right? That would be too weird. … But because my parents both know German and we still have some distant relatives in Germany, I actually traveled several times as a child and teenager to Germany to visit. And then in college, I took German, and I did a couple study-abroad programs in the summer. I kept doing well at German, and I hit a point where I had to choose, do I want to take more math classes or more German classes, because you can’t do it all. And I just went German because I thought that’d be way more fun to do.”

She graduated in 2007 from the University of North Dakota with a BA in German, and in 2017 she received her MEd in Instructional Design and Technology from UND. After graduating with her bachelor’s degree and getting her teacher’s license, she started as a German teacher at Red River High School in Grand Forks. The experience of starting her career in teaching at a school in one of the state’s larger cities was daunting at first, she said, as someone who grew up in small-town ND. But having done so was helpful to her development as an educator.

“You know, going from being a small-town person from Center and then being put into teaching in a big school, it’s a cultural shift,” Dvorak said. “Red River and Grand Forks was able to offer a mentorship program, professional development and colleagues in same field – all something that aren’t necessarily available for me now. I’m grateful I started there before coming to this job. The programs were more advanced. There was always a level three and four, plus we traveled. I traveled with three student groups in my time while I was there to Germany, and we had an exchange that would be impossible to duplicate in my current position.”

Dvorak teaches interactively out of Mandan High School to many surrounding communities, including Stanley, Surrey, Parshall, her hometown of Center-Stanton and Beulah. She is a member of the Turtle Lake-Mercer Education Association and participates with her local association virtually, in a fashion like how she teaches. “I’ve always found being part of NDEA/NDU has always been important for all they do for teachers,” she said. “It’s great to know someone has my back.”

FLAND is an organization that supports the study and teaching of foreign languages. It was formed in 1968. FLAND’s Teacher of the Year award is named for Graciela Wilborn, a longtime Spanish teacher at UND, humanitarian, mentor, and champion of foreign language learning. Dvorak said that her membership in FLAND helps her in many ways, including networking, mentoring and providing her a forum to share ideas with her contemporaries.

“Networking is huge,” she said. “In Grand Forks, with being at a big school, I had other foreign language teachers to collaborate with. There was another German teacher in Grand Forks. I joined FLAND back then, as I had been encouraged by a couple other members in Grand Forks and my own dad to join. You get to meet other people, learn new things … It’s definitely a lot of passing on lots of great ideas, and we can focus on our foreign language topics. … I love to get out there and meet people. I still use much of what I learn at the conferences in my regular lessons.”

In appreciation for receiving this year’s award, we asked her to give some closing remarks, but please “sprich Deutsch.” So, in closing, Dvorak said this: “Danke alle im FLAND. Ohne euch hätte ich das nicht geschafft. Ich war ganz überrascht. Das ist eine große Ehre für mich und ich glaube es repräsentiert auch die Kollegen, die mir geholfen haben und meine Mentoren waren.” (Rough translation: Thanks to everyone in FLAND. I couldn’t do it without you. I was very surprised. It is a great honor for me, and I think it represents the colleagues who have helped me and those who were my mentors.)