This week, we recap the Legislative Update given at East Regional Assembly

My first and only admission this week is that we don’t have a North Dakota United Legislative Update video to share with all you lovely people. Normally, President Nick Archuleta and Director of Public Affairs Tom Gerhardt talk all things legislative in front of a camera on Fridays. Due to technical difficulties, that didn’t happen. That’s the bad news.

The good news is we held our 2019 East Regional Assembly this Saturday in Fargo, and Nick and Tom presented a Legislative Update live, in front of a studio audience (wasn’t really a studio, it was a hotel ballroom, but certainly a great audience of NDU members), and I’ve got some photos and notes from what they had to say to (legislative) report out to you now. That’s pretty great, right?

Guns in Schools and Public Buildings

So, remember how last week, we told you that HB 1206, a bill “relating to possession of a concealed firearm or dangerous weapon at a public gathering,” had failed in the Senate, 11-36? And that it might come back as an amendment on another bill? Yeah, that happened.

SB 2172​ was amended to include that language from HB 1206 that will create a Class 1 “exempt” license to carry a concealed firearm at public gatherings including schools, churches, athletic events and publicly owned or operated buildings. 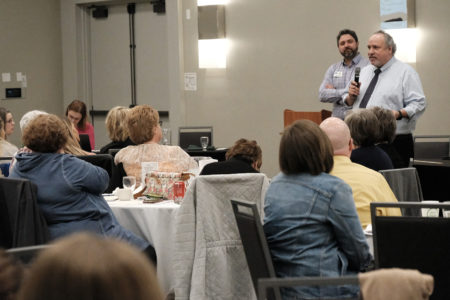 “We’ve heard back from public employees and teachers and everybody else that says they don’t want guns in their workplace,” President Archuleta said.

If passed, this bill would threaten the safety of our communities and make it very difficult for law enforcement responding in an active shooter situation to know how many individuals may be carrying concealed firearms.

Please email your representative now and let them know you oppose SB 2172 and don’t want concealed firearms in our schools and public buildings.

There were three bills, originating from the Senate, that were meant to shore up the ND Public Employee Retirement System (NDPERS) defined-benefit pension plan for public employees: SB 2046, 2047, 2048. We supported one of these — SB 2048 — because it did the right thing, and increased the contribution rates of both employee and employer by one percent, and would have put the fund back on a trajectory to being fully funded. We opposed the other two ideas, to decrease the multiplier that determines future recipients’ benefit received, which is in SB 2047, and to strip the health care credit from future workers, which is in SB 2046.

All three of these bills passed the House. However, SB 2048 was turned into a study. Rep. Pamela Anderson (41-Fargo) argued against the study during debate. “What will another study do?” Anderson asked. “It will do nothing but unnecessarily spend money and further delay a solution to the PERS funding crisis.”

A bill drafted to protect free speech on university campuses in North Dakota, SB 2320, has traveled a twisty road from its introduction to now. At its start, it was rather lengthy, and it included some troubling provisions that would expose university professors to litigation for saying the wrong thing, in or outside of class. That language was removed from the bill before it passed the Senate, 35-10, and then moved onto the House. And

that bad language went right back in.

“This involves free speech on campus, and there is NOBODY that is opposed to free speech on campus,” President Archuleta said. “This bill allows for, if a teacher or a college professor veers off the course and discusses something that isn’t really tightly regulated by that syllabus, they could be sued for that. They could be sued for $100,000. That doesn’t make any sense to us.”

Thankfully, the language was stripped out, again.

“When they first introduced it,” President Archuleta explained, “it would have made it so when a professor strayed from their syllabus and talked about something that was outside of their syllabus … they could be sued for up to $100,000. … Now it’s a bill that’s still unnecessary, but basically it says we will follow the law.“

The House voted Monday on this bill, and it passed, 87-3.

Here’s a new section of the Legislative Report I just made up on the spot. Part of the beauty of hosting a Legislative Update in front of our members at Regional Assembly is that Nick and Tom could take questions. And “since you asked …” we can share that answer with you here. Really pay attention to this inaugural edition of “Since You Asked …”; I think it’s going to take off in a big way. Or I’ll forget to do another one next week.

A: “The administrators group, the North Dakota Council of Education Leaders, came up with this idea that, rather than recording contact time in days, we should be doing it by hours,” President Archuleta said. “And the thought there was, if we did it by hours, they could have more professional development time, and they wouldn’t have to go to the Governor to get excused for the storm days. You saw how many of those storm days we had this year. … The problem with this is that, if it was taken to its extent, you could end up with 14 fewer contact days with students a year.

“From my point of view, when I testified on this, it was so what happens to teachers’ contracts? Let’s just say that this happens and suddenly there’s 14 fewer days, or some district out there says, ‘You know what, this is our second year in a row with a budget that’s in the red. We can make up some money by just not paying those teachers for those 14 days and then adopting a calendar that mirrored that. We have all kinds of assurances from the school boards administration and administrators that that would never, ever happen. … Anyway, the status of that bill is … it’s in conference committee.”

The House passed this bill, 86-5, on Jan. 31. The Senate amended it, and passed their version of the bill, 46-0. A conference committee will ultimately iron out the wrinkles.

So, yeah. I’m Kelly Hagen, NDU communications director, and I’m almost out of words. I have just enough of them left to tell you about our 2019 West Regional Assembly in Bismarck, at the Radisson Inn, on Saturday, April 13, with a social the night before. It’ll be way, way, so much fun, I assure you, and informative, too.