In this week’s report, we look at the economic outlook, gun bills, teacher licenses and more!

Top o’ the morning to ya! That’s what I would have been saying to you if I’d sent this e-mail out on St. Patrick’s Day this past Sunday, but it’s also what I am saying to you right now because this legislative session is wearing me out and I don’t have the energy to think of a better beginning than that one.

We start off this week’s Legislative Report with the video of the NDU Legislative Update, featuring President Nick Archuleta and Public Affairs Director Tom Gerhardt, saying out loud most of the things I’m about to write down for you all:

And now, on to all that writing I promised you!

Last week, for those who don’t remember it, was just a flurry of revenue forecasts coming out of state government. First, the Governor’s office released theirs from Moody’s Analytics on Monday. It was good news! Then the Legislature released their own projections, courtesy of IHS Markit on Tuesday. Also good news! Just not as good! And by Thursday, the Senate and House Appropriations Committees had adopted a revenue forecast from the two reports, which will “direct budgeting decisions in the final weeks of the 2019 session.”

“Our revenue going forward looks very healthy,” said NDU President Archuleta. “(Governor Burgum) was adamant that these ideas he’s been pushing for should go through, and we can afford to do them.” So we will be keeping a close eye on the budgeting process going forward, with the hope that the Legislature recognizes the need to step up to the plate and make up for the cuts made to state agencies and higher education, and flattened funding given to K-12 education, during the last biennium. We have the funds available, so let’s use them to provide the highest-quality public education to our students, and public services to all the people of our state. Please?

Another big story from last week that you may have noticed was that Land Commissioner Jodi Smith brought up the small matter of $137 million that was supposed to go to the Common Schools Trust Fund and the Foundation Aid Stabilization Fund, but didn’t. “We’ve been working closely with the Governor’s office on this and Land Board to really find out the facts,” President Archuleta said. “We testified in favor, of course, of cleaning up that language, and then we also said that we would support and expect an amendment that would back-fill that money that should have gone there in the first place, because it’s not nearly enough.”

Pretty good chance we’ll be hearing more about this story in the coming weeks. We’ll keep you posted. 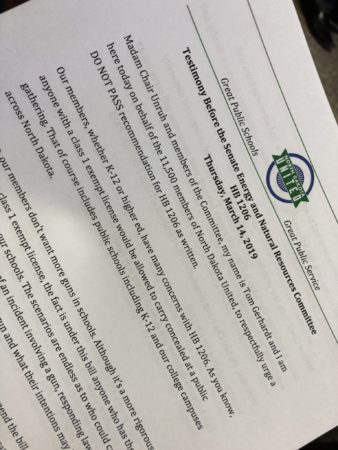 HB 1206 is a bill that would allow anyone who possesses a class 1 exempt license to carry a concealed weapon into a “public gathering,” which is classified as “an athletic or sporting event, a school, a church, and a publicly owned or operated building.” This bill, which has already passed the House of Representatives, was heard by the Senate Energy and Natural Resources Committee this past Thursday. We testified against it.

“Our members have told us that they don’t want people outside of law enforcement carrying a gun concealed or even outwardly in any public workspace or any public school or at sporting events like hockey games and those sorts of things,” President Archuleta said. “We don’t see a need for that, and we vigorously oppose this bill.”

And then we have HB 1332, which is the “Armed First Responder” bill. This is meant to primarily assist smaller, rural schools, at which law enforcement would have a difficult time responding to an incident at a school in a quick manner. These school districts could apply for permission to allow selected personnel already on school grounds to conceal carry, and to train them on how to respond in the event of an armed intruder. This bill, also passed by the House of Representatives, was also heard by the Senate ENR Committee on Thursday. We oppose this one, too.

“This bill frankly, from the outside, was a better bill than those other bills that have come in previous sessions, but still our members have told us that they are not supportive of having anyone but school resource officers who are employed by the police departments or sheriff’s departments having guns in school,” said President Archuleta. “We think an amendment should be made to this bill if they are going to advance it, and that would be to make sure that administrators and teachers and paraprofessionals, those people who are in charge of children, cannot be considered as armed first responders. In an emergency, these people have plenty to do. And they have already-prescripted job duties to make sure to keep those kids safe, so we want to make sure that they are allowed to do that.”

The majority of our members are K-12 teachers. And almost all of know full well how rigorous the process is to get your teaching license. Standards need to be kept high, so that we are preparing teachers for the colossal task set in front of them: educating the next generation of North Dakotan citizens to live up to their full potential. Or, as some legislators have come to see it, let’s just lower the standards, and everything fixes itself. Right? Enter: HB 1287 “This is a horrible bill,” said President Archuleta, without mincing words. “I’ve never seen any legislation like this. It takes one company, and you write legislation so it is the only one of its kind that can do business in North Dakota. It’s ridiculous, and we’ve testified vigorously against this bill as well. The name of the company is ABCTE; it is a company with a not very good track record.”

The Senate Education Committee heard this bill last Tuesday, as was HB 1531, which  is the “community expert” bill, meant to fill the hard-to-fill teaching positions in smaller schools with the aforementioned experts in their communities. “We weren’t in support of this at all, and we hope it doesn’t make it out, certainly without some serious amendments,” President Archuleta said. “These things cheapen the license that the men and women in North Dakota who have gone through the institutions of higher education and teacher prep programs and worked hard, accrued debt and all that, and then learned and honed their practice. Frankly, this cheapens their efforts and it cheapens their degree. … We’ll have legislators tell us, ‘Well, no. This is to address the teacher shortage.’ Well, you don’t address the teacher shortage by cheapening the profession.”

Speaking of bad-faith efforts to address the teacher shortage in our state … HB 1347, everyone.

This is the bill that will increase the length of time that teachers remain on “probation” after being hired. Currently, that period of time lasts one year, which is comparable to the private sector and among other classifications of public employees. HB 1347 seeks to increase that probationary period to three years. Because reasons.

“This is the sort of thing, this probationary teacher thing, this is exactly what the North Dakota Council of Education administrators should have been coming to us and talking and having a thorough discussion of this issue long before this legislation went in, but we were excluded from it until this bill was filed, and that’s just not the way to do it,” President Archuleta said. “We don’t think three years is the magic number.”

Stay tuned to our NDU website at www.ndunited.org, our Facebook at www.facebook.com/ndunited and Twitter at twitter.com/ndunited, for the latest news on what is happening, and what you can do to help. Please 🙏 and thank you 😊.

SB 2217 — “A BILL for an Act to provide for a legislative management study of a teacher incentive for leadership program.” The Teacher Incentives for Leadership in Education (TILE) bill was turned into a study, “and we hope that they do study this issue,” President Archuleta said, “because what the TILE bill would do is it provides an opportunity for teachers to get into leadership positions without having to leave the classroom and become an administrator. This is an excellent way to do this.” Support.

HCR 3016 — “A concurrent resolution to amend and reenact subsection 1 of section 6 of article VIII and sections 12 and 13 of article IX of the Constitution of North Dakota, relating to the names, locations, and missions of the institutions of higher education.which removes references to names, locations & missions of higher ed institutions.” Presidents from Minot State University, Mayville State University and the North Dakota University System were on hand to testify against this resolution in committee today, citing flexibility now to adjust to changes and the fear those communities feel about closing institutions. Oppose.

HB 1470 — “Relating to family leave for state employees; and to provide for a legislative management study of state employee leave policies.” This received a 7-0 “do pass” recommendation from the Senate Government and Veteran Affairs Committee on Friday, and was placed on the calendar. Support. 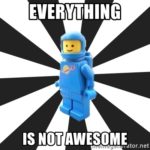 Another week, another sigh of relief at having finished this report! And we’re another week closer to the finish line. Stay with us! We’re almost there! If I may borrow a phrase from a song in The Lego Movie 2: The Second Part, “Everything’s not awesome. Things can’t be awesome all of the time. It’s not realistic expectation. But that doesn’t mean we shouldn’t try.” The name I answer to is Kelly Hagen, NDU communications director, and you can get my attention by clicking on that link and sending me an e-mail. See you again next week!