This week, we look at bills and resolutions concerning school safety, mentions of higher education institutions in our constitution and a lot more

Time again for another of our weekly North Dakota United Legislative Reports! Are you excited out of your minds?! I know I am!!

Taking it down a notch or 12, my name is Kelly Hagen, and I am your ND United communications director. The companion piece to this report is our weekly Facebook Live broadcast of the ND United Legislative Update, featuring NDU President Nick Archuleta and Public Affairs Director Tom Gerhardt. You can watch that video by clicking on the play button on the video embedded directly below these words ⇓⇓⇓⇓⇓.

Watched it? Good! Now I’m going to write about what they said. 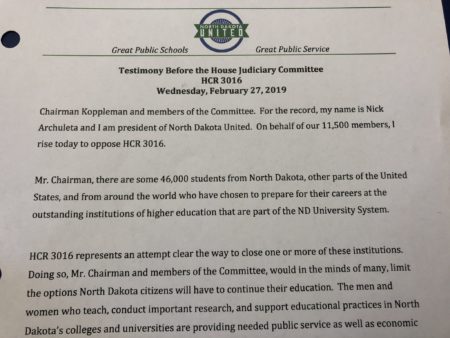 For those who hadn’t heard, HCR 3016 is an ominous resolution up for consideration in the Legislature this session, which intends to “remove references to the names, locations, and missions of the institutions of higher education” from our state’s constitution. Neat-o, right? Unless you live in Mayville, Wahpeton, Devils Lake, Minot, Dickinson, Williston, Bottineau or even Grand Forks or Fargo, and you stand to lose one of those aforementioned “institutions of higher education” from your community. These universities are training grounds for the next generation, which pull needed young people into communities of all sizes, and also act as valuable economic engines for those communities.

“There are some people out there who don’t think that some of our educational institutions are necessary anymore,” said NDU President Nick Archuleta. “Well, we’re here to say that is not true. I think we’re seeing these schools and how they’ve evolved using technology and so on, have a very vibrant spot in our communities across the state. They’re economic engines in places where they exist and do deserve to stay here.”

Let’s talk about some legislation that we strongly favor: SB 2052, a bill from the Senate, “relating to school district safety plans” and to “levy authority for a school safety plan.” This bill flew through the Senate, 43-3, with an emergency clause approved to get it into state law as quickly as possible. This is a testament to the bipartisan commitment within our Legislature to keep our kids safe when they are at school.

“It would allow schools, after they’ve developed a safety plan, to raise mill levies in their community to enact that plan,” President Archuleta said. “So they could use the additional funds for cameras and security, or upgrade entrances or whatever they decide to do with it, as long as it has a focus on school safety.”

Again, we’re big supporters of education and vision in this state. SB 2025, “relating to the duty of the superintendent of public instruction to review the statewide education strategic vision; and provide reports to the legislative assembly and legislative management,” is a big step forward for allowing all our education stakeholders to look forward and make sound strategic plans for the future.

This passed unanimously in the Senate, and received a House Education Committee hearing on Feb. 27. We’ll be keeping our eyes on it in the short-term, while it makes its way through the legislative process, and in the long-term, after it (hopefully) gets passed, to make sure that educators’ voices are being heard!

This resolution, SCR 4018, was a fantastic idea, to conduct a study on “the feasibility and desirability of implementing a paid family leave program structured to be beneficial to both families and businesses, including an analysis of how to make the program financially sound while being affordable for families and businesses; and a review of the data on usage rates from other states that have programs, which state agency would be best suited to administer the program, and policies required to ensure program success.”

“We know that families are working harder than ever to make the ends meet,” President Archuleta said. “We know too that people are living paycheck to paycheck in a lot of areas, and they can’t afford even a $400 car payment or a repair bill for their car. … So when you consider the fact that some people have to leave their job to care for somebody in their family, a parent or so a child, that is really a financial hardship for them.”

It is my unfortunate duty to report that SCR 4018 failed by a voice vote in the Senate on Friday. And if anybody can explain to us how even studying the possibility of coming up with a plan to give workers time off to care for a loved one is somehow a bad thing, we’d appreciate that. North Dakota is a pretty great state to raise a family in, I’ve found. This study could have done a lot for keeping it that way, for a lot of us.

Here’s what is coming up next in the Legislature, quick as I can round it up for you!

SB 2015 — “To provide an appropriation for defraying the expenses of the various divisions under the supervision of the director of the office of management and budget.” This is the Office of Management and Budget appropriation, which sets the standard by which all state agencies and higher education institutions give out salary increases. Basically, the Senate’s plan calls for a 2 percent raise in 2019, followed by a 3 percent raise in 2020, and a minimum raise of $80 per month for all workers. Plus there are state employee performance bonuses wrapped into this plan. Public workers have gone the past two years without pay increases, while costs of living continue to rise everywhere in our state. It’s time, and it’s very good to see our legislators agree that we need to step up to the plate if we want to continue to recruit and retain talent into the private sector. This passed the Senate, 43-3, and went in front of the House Appropriations Committee today. Support.

SCR 4004 — “A concurrent resolution directing the Legislative Management to consider studying the impact of violent, disruptive, and inappropriate behavior within the educational environment perpetrated by students against other students, teachers, and other school personnel, and the need to implement a uniform reporting system.” Again, the safety of our students and of teachers and staff in our schools is incredibly important to all of us in North Dakota United. This resolution would allow for a study in the best path forward in making our schools safer for everyone! The House Education Committee heard this today at 2 p.m. Support.

HB 1346 — “Relating to required number of hours of instruction by school districts and weather emergencies.” We still have a lot of questions on this one. Hopefully they will be answered tomorrow at 1:30 p.m., when this receives its hearing in the Senate Education Committee.

SB 2046, 2047, 2048 — These are the trilogy of ND Public Employee Retirement System pension bills. We support the SB 2048, which will help to return the plan to fully funded status, and oppose the parts that will decrease the multiplier that determines future recipients’ benefit received, which is in SB 2047, and strips the health care credit from future workers, which is in SB 2046. House Government and Veterans Affairs Committee will hold a hearing on all three this Thursday, March 7, beginning at 8:15 a.m.

Thank you for joining us for another exciting installment of NDU Legislative Report. The most action-packed part of Legislative Assembly is only getting started, people. Buckle up!