N.D. ESP Of The Year Helps Kids To ‘Sparkle’ 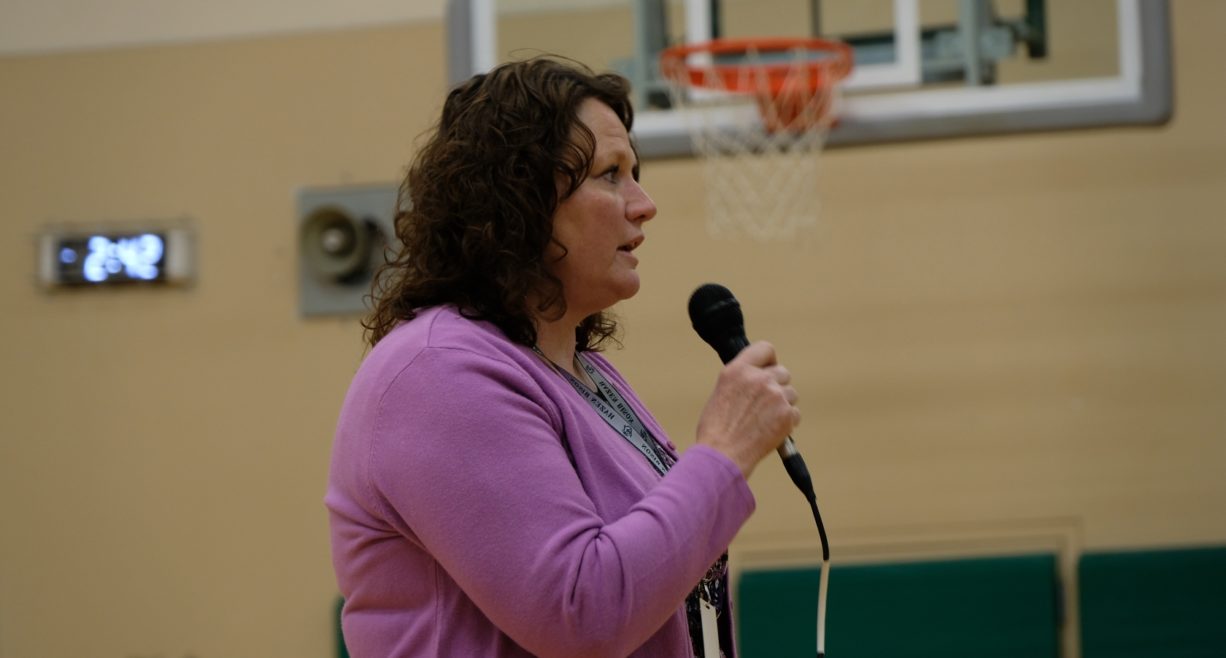 Being a mom of ten children, you could say that Mary Ann Klein, a paraeducator at Hazen Elementary School, was destined to work in education. You could also say that with that much experience and compassion, it should come as no surprise that she was selected as the North Dakota United Education Support Professional of the Year for 2017.

“I was surprised. I guess I was shocked because I feel like I’m just your average worker like the rest of them,” she said. “We’re all just trying to do a good job and help the kids be successful.”

When she first came to Hazen Elementary School, Klein had never worked in an educational setting before. In fact, she never saw herself working in education. She grew up in Cleveland, N.D., as the daughter of a rancher. Her graduating class in 1980 was made up of only eight students. She went on to graduate from Mary College — now the University of Mary, with a bachelor’s of science degree in nursing and an emphasis in health education. She had, of course, been on the other side of the education system as a parent.

“You see a part of it as a parent, but once you’re working within the system, you realize there’s so much more to it that we don’t see as parents.”

Klein came to Hazen in 2012, and she described that at first, she just did what a normal para-educator would do. A couple of years later, she started working with kids who needed an education that was more tailored to their individual needs. Now, Klein is a jack-of-all-trades in the Hazen school district. She is there every morning at 7:30 and doesn’t go home until after 5:00 some days. Not only does she perform her usual ESP duties, she has a before- and after-school tutoring program. She also just recently started offering to drive kids home after school or after their activities. During the summer, Klein works as a custodian for the school district.

But her busy life does not stop there. Since joining North Dakota United two years ago, Klein has been a very active member. Hazen Elementary School music teacher and president of the Hazen Education Association, Chris Harvey, had much to say about this.

“She has taken part in local, state and national activities. She has attended our local meetings in Hazen and has helped with the ESP membership drive,” he said. “She was instrumental in Hazen offering membership to ESP members beginning in the 2016–17 school year. She personally visited with many ESPs in our district and convinced them to join HEA and NDU. Klein also represented North Dakota ESP members at an AFT conference in Detroit. Last spring, she placed her name on the ballot to serve as a statewide delegate to the NEA Representative Assembly, and was selected to attend and served as a statewide delegate at the RA in Boston.”

Regarding the NEA Representative Assembly, Klein expressed her appreciation for Harvey.

“I really have to thank Chris. He’s very good at making us aware of the different opportunities that we have with North Dakota United,” she said. “I think I would’ve been a lot more overwhelmed if it hadn’t been for Chris’s support in helping me get through the process.”

The job of an ESP is one with many challenges. To perform to the best of their ability, an ESP must have a lot of energy and a positive attitude, which Klein most certainly does.

“I think it’s the work ethic. My parents and brothers and I, we all have a very strong work ethic. We also have a strong community service calling in my family,” she said. “I’ve worked with children and students all my life. I was a 4-H leader before I even had kids in 4-H.”

Klein works hard every day to make sure that no student is struggling. She helps them through tough times and encourages them to be the best they can be.

“Every child deserves to be successful,” she said.

Though working as an ESP has its challenges, it equally has its rewards. Klein said that she has experienced many different rewards throughout her career as an ESP, and these experiences have helped her grow as an educator.

We know one thing for certain: the students and staff at Hazen Elementary School are extremely lucky to have Klein working for them, always willing to lend a hand.

“I love children, I don’t know how else I can say that,” she said, with a laugh. “I think children are just like a diamond. They sparkle, and I enjoy seeing them sparkle.”