Mr. D Earns Grade A as Teacher of the Year

Bret Dockter, a sixth-grade teacher from Harvey, honored at ceremony in Capitol along with three other finalists, all members of North Dakota United 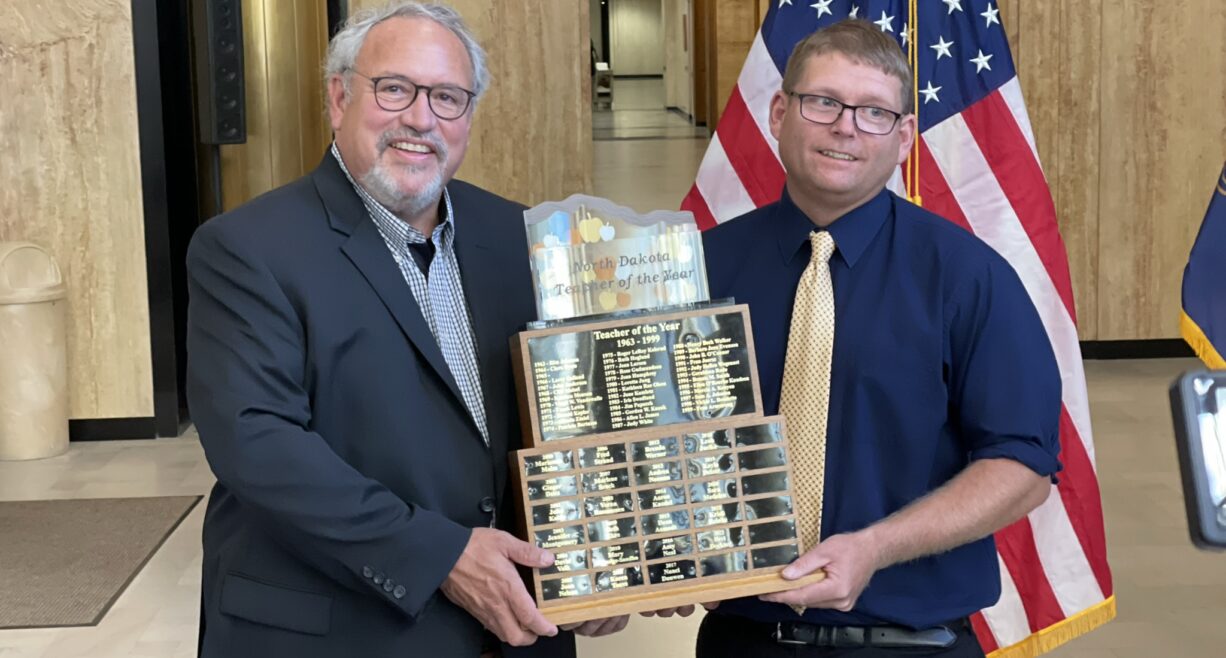 Home ＞ Article ＞ Mr. D Earns Grade A as Teacher of the Year
Posted in

The 2022 North Dakota Teacher of Year is known affectionately as Mr. “D.” But this sixth-grade social studies, science and math teacher and varsity football coach gets “A’s” for the effort he gives in the classroom at B.M. Hanson Elementary in Harvey. Bret Dockter, a North Dakota United member, was honored as Teacher of the Year in a ceremony at the Capitol today, along with three other finalists from across the state.

Dockter said an old college speech teacher told him he’d better perfect the art of public speaking because he may one day be in front of the governor.

Today, the 23-year educator accepted the award in front of Governor Doug Burgum and a packed Great Hall at the Capitol.

“It is with great pride and humility that I stand here today to accept this award,” Dockter said in his remarks. “I am humbled and overwhelmed when I think about the amazing teachers all across the state of North Dakota. It is surreal to be considered that I am among them because there are so many of them. Every day – and I’ve heard it quite a bit this morning about the pandemic and what teachers went through, and it was never easy – but no one ever gave up, and that’s North Dakota.”

Dockter mentioned the significant efforts that educators have given during the pandemic — and never giving up. He offered a long list of thank-you’s, including one to North Dakota United.

“Next, thank you to President Archuleta and North Dakota United for having our backs and supporting the welfare of our teachers,” he said. “The pandemic has taken its toll on the teaching profession. It is a relief to know that we have a group that are promoting our teachers and are concerned for the health and well-being of our teachers.”

“They are incredible teachers, and they are here representing incredible colleagues all across the state,” NDU President Nick Archuleta said. “The quality of the work that you have done over the course of the past two years has been nothing short of phenomenal. You went from full-time face-to-face instruction to full-time distance learning instruction, and back again, more competently and professionally than any state in the nation.”

The other three finalists for North Dakota Teacher of the Year award included Heather Ell, of John Hoeven Elementary in Minot, Matt Nielson, of Valley City High School, and Shari Jerdi, of Community School in Grand Forks. All are members of North Dakota United.

North Dakota Superintendent of Public Instruction Kirsten Baesler said that when her office called Dockter to inform him he was a finalist, they found out more about his character.

“When we first called Mr. Dockter in July to tell him he was a finalist for the Teacher of the Year award, our public information officer was calling, and he said, ‘I can’t talk to you right now; I’ll have to call you back.’ He was volunteering his time working on a city garbage truck, and he needed to attend to that,” North Dakota Superintendent of Public Instruction Kirsten Baesler said.

Governor Burgum lauded Dockter for his work with project-based learning.

“He understands that students learn better when they see themselves as part of something larger, something like as members of a team or a project team,” Governor Burgum said. “He encourages students to apply what they learn in a classroom in their lives outside of school and he encourages relationship building in his community.”

Dockter says it’s all about the kids.

“When I came this morning, and I saw a group of my boys walk in — and they had no idea that this was going down today — it took my breath away,” Dockter said. “When I got up this morning and started getting ready, I got a text from the grade school with the whole grade school in the gym floor wishing me good luck. There are no words to describe what those kids mean to all of us.”