Leah Juelke is the 2018 North Dakota Teacher of the Year 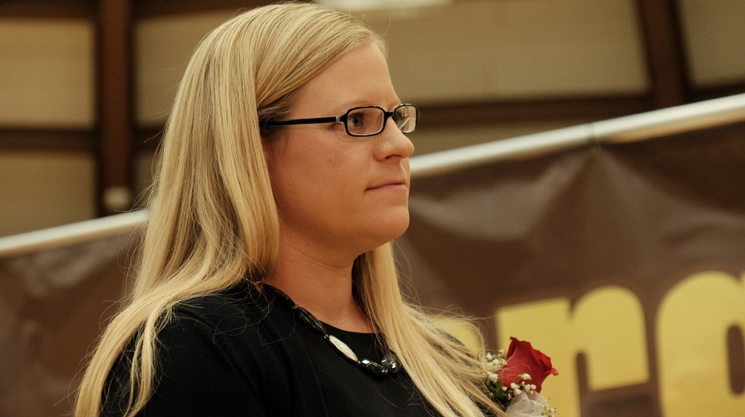 For the 2018 North Dakota Teacher of the Year, Leah Juelke, an English Learner Language Arts teacher at Fargo South High School, the education she has learned from her travels across the globe, are the lessons she can now give to her students, who come to her classroom from points all around the planet.

“One of the things I do on the first day of school is we have a team-building exercise,” Juelke said. “We go outside, and we do relay races. I tie their feet together, and they do races together with their partners. And one of the first things I ask the students on that day is: What’s the first thing you’re going to bring to class? They’ll say, ‘A pencil!’ and I say, ‘Yes. Please bring a pencil. But that’s not it. The first thing you’re going to bring is a positive attitude and respect, … And that has made such a difference, because they know that this classroom is kind of like a family. And we work together.”

Juelke was chosen for this year’s honor from a list of five finalists, which included: Sandra Evenson, a sixth-grade science teacher at Cheney Middle School in West Fargo; Heather Tomlin-Rohr, a kindergarten teacher from Louis L’Amour Elementary School in Jamestown; Lynae Holmen, a special-needs teacher at Longfellow Elementary in Minot; and Thomas Klapp, a science teacher from Northern Cass High School in Hunter. Juelke was presented with the Teacher of the Year award on Sept. 28 by Gov. Doug Burgum and Superintendent Kirsten Baesler at a special ceremony at Fargo South and attended by all five finalists.

All five finalists for Teacher of the Year are members of North Dakota United.

For Juelke, receiving this award at Fargo South was especially personal as it’s where she grew up, having graduated there in 2001. She knew then that she wanted to pursue a career in assisting people, but initially she thought that path would be through nursing.

“My mom was an art teacher, and in the back of my head I was always thinking it would be fun to be a teacher,” Juelke said. “The helping people aspect was always there, but I was focused on nursing because I’d been a CNA during high school and a little bit during college. And I thought that was where it would take me.”

She did her first year at North Dakota State University as a nursing major, and then joined the Army. “I took a semester off and went into the Minnesota Army National Guard,” she said. Juelke’s unit eventually got called up to go overseas, and she stayed back stateside, and started training new recruits on CPR and medical practices. She realized that she loved teaching the soldiers that were coming in. “It was very clear at that moment,” she said. “I love the medical part of the Army, but I love the teaching more.”

She continued school and received her bachelor’s degree in English Education and ELL from NDSU, as well as a master’s degree in Curriculum and Instruction.

After college, she went out to see the world. Starting as an instructor at a boarding school in Taiwan, she also taught in Ecuador, and traveled to China, Costa Rica, Oxford, England, and across Europe.

“After teaching in other countries, it really put me in a place where I had to figure things out for myself,” she said. “I was new to their culture, wherever I was. I went through language issues, where I couldn’t explain what I wanted to the person at the bank, and I had to use my little book or rely on someone else. I think that really helps me as a teacher, teaching the population I teach, to empathize with them and understand where they’re coming from when certain situations happen.”

In her time as an EL instructor at Fargo South, she has implemented a great deal of innovative projects and practices, including helping to coordinate the EL curriculum across disciplines, so that the students can fast-track their English skills. “So, in science, they will be doing prepositions at the same time that I’m doing prepositions in my English class,” she said. “Social studies and math will be doing the same.”

Also, for the past three years, Juelke has put together anthologies of narratives, written by her students, about their journeys to America. “The first year I did it, it was just an assignment in class,” she said. “After I read them, I just kept thinking, wow, other people have to read these. I kept sharing them with the other EL teachers. And then I started thinking, why can’t we produce something?”

She launched her “Journey to America” narrative writing project during the 2014–15 school year, and received a grant in 2015, and every year since, that allowed her to publish hard copies of the stories as well as bring in John Bul Dau, a Lost Boy of Sudan, to Fargo South to speak in front of the entire school and help her students in crafting their narratives.

“He started telling the students, don’t be ashamed about your story,” Juelke said. “Don’t be shy. Look at me. I drank urine and I am now a CEO of my own company. I’m not embarrassed to tell my own story.” Juelke also partnered with the surrounding universities in Fargo and Moorhead to bring in college students to help the students with the technical writing during the project. At the end of the project, students celebrate with a public reading of the stories at NDSU.

A pair of narratives from two sisters were the impetus of one of the most remarkable transformations that Juelke has ever seen in her students. “It was two sisters who wrote about how they were running away from their village, and they turned around and their dad wasn’t there,” Juelke said. “He had been shot, and they ran back to him. The rebels had poured gasoline on him and lit him on fire, right in front of his 8- and 9-year-old daughters. “One of the girls, Aline, she ended up going to Bismarck and she testified against that refugee bill they had last year (in the Legislature). She went there, and she told them how she was going to be a productive member of society, and she told them, ‘This is my story, and you cannot say that refugees are not going to be productive and good.’”

Aline and Esperance wrote their narratives of their family’s story in “Journey to America.” Esperance also had her story featured in “Green Card Youth Voices: Immigration Stories from a Fargo High School.”

“I connected with the director of the organization, Green Card Voices, in the summer of 2016,” Juelke said. “The organization came to South in the fall and interviewed 31 Fargo South EL students, of varying English levels. I helped to transcribe the interviews, and by the spring, the stories were published in this book. Along with a traveling exhibit and online interviews, the book is now used as curriculum around the U.S., and at local Fargo-Moorhead universities and high schools, to help teach about diversity. The students are now doing book readings around North Dakota.”

All of these students’ accounts of traveling to Fargo, and the adversity they had to overcome to get there, will both warm and break your heart. Esperance’s story is particularly harrowing. “They were calling to the people in the camp to come out so that they could shoot them,” she said. “So many people were burned alive that day, including my father, who one of the killers took and burned after he saw us going towards him. … After debating with one of his friends, one of the killers decided to let us live, since they thought that we couldn’t get far in life because both of our parents were dead.”

Juelke says that the sisters’ stories have affected her, as a teacher and as a person. “Every time I hear their stories, tears still fill my eyes,” she said.

This past summer, the two sisters sent Juelke an invitation to a memorial service for their father. “I was the only non-African there, and it was 100 people from all over the state that knew them. I talked to Aline afterwards, and I asked, ‘Why now? It’s been nine years since your dad passed away.’ And she said, ‘It’s because of you. Before we wrote the story, before we talked about it in class, we never talked about my dad. Every time I read it, I feel better. Sometimes I cry, but I feel better.’ That’s a teacher moment where I felt like I made an impact.”

Winning these awards for Teacher of the Year from Fargo Public Schools and the state of North Dakota would be enough to fill anyone’s resume, but Juelke has accomplished a lot during a relatively short teaching career. She was also named the Communications, Speech and Theater of North Dakota (CSTAND) Debate Coach of the Year in 2017, and their Outstanding Teacher of the Year. “I love coaching debate and student congress,” she said. “It is great to see the amazing young talent that we have all over the state of North Dakota. My students continue to make me proud every tournament, with their hard work and dedication.”

Her students admire her as much as she does them. “I’m glad that I have Ms. Juelke,” said Lucia Rushikana, a senior. “Whenever you need help with anything, you can just go to her and tell her all your problems.”

“Ms. Juelke is the best of the best teachers I’ve ever had,” said Therese Lusamba, a junior. “She’s like a mother to us!” said Diane Mutumukeye, a senior. “We respect her, we love her. … She’s the best.”

Two students who are working on writing their own narratives of their journeys to America in Juelke’s class this year, wanted to express their gratitude to her for helping them to bring out their stories. “She helps us to make the story easier,” said Narayan Sanyasi, a junior. “She asks us the things we need to do, and tells us to just write one page today, and another page tomorrow …”

“It’s kind of really hard to think back then and write about all of it,” admits Muqsin Hussein, a senior. “But she helps us out. She can ask us the questions, and helps put it together so it makes sense. She’s a really great teacher. Teacher of the year!”