The Last NDU Legislative Update for 2017, or YAHOO! Session’s Over! 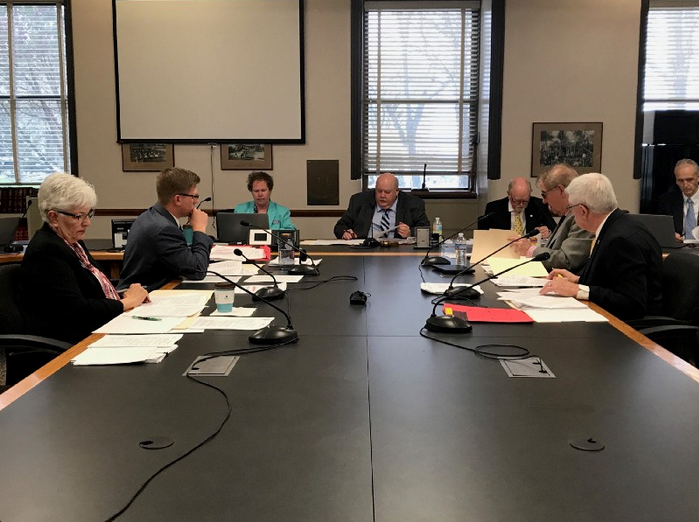 Home ＞ Article ＞ The Last NDU Legislative Update for 2017, or YAHOO! Session’s Over!
Posted in

In the end “the best of times and the worst of times” have come to pass as the 65th Legislative Assembly wrapped up business at around 8:30 p.m. Thursday evening. A legislative stalemate between the House and Senate had threatened to send the session to its full 80 days, but that ended when the Senate conceded to the House on a provision of HB 1023 dealing with PERS. It happened quickly.

Senate Majority Leader Rich Wardner walked into the House chamber during its Wednesday 5 p.m. session and summoned House Majority Leader Al Carlson. Wardner told Carlson to get his conference committee ready in 15 minutes to meet on HB 1023. That conversation released the log jam.

Within a half hour or so, the Senate decided to avoid a repeat of the 2015 session (which saw the House walk out), deciding it would give in on allowing the PERS health insurance contract to be rebid in two years with Carlson’s ultimate goal of moving PERS to a self-insured plan. Throughout the session the Senate had resisted that idea.

HB 1023, the PERS budget bill, was thrust into the limelight just before Crossover, when Representative Carlson attached an 80-some page policy amendment onto it.

Needless to say, the House and Senate never did see eye to eye on the change proposed by Carlson, and the bill took the session right down to the wire.

The Senate did not walk away empty-handed, though. The PERS bill was leveraged against funding for Dickinson State University (Wardner’s hometown university), and in the end DSU was funded with a hold-harmless clause.

HB 1023 and SB 2003 — the University System budget — were the final two bills that North Dakota United was glued to the final week of the session. We also kept a close eye on HB 1015, the OMB budget, but in the end the two power conference committees, made up of both the House and Senate majority and minority leaders and the two appropriation chairs, agreed on the hodge-podge final bill of the session with little consternation.

Along with tensions between the House and Senate, cuts and reductions were the order of the session. In the big picture, the Assembly passed a $4.3 billion general fund budget for the upcoming biennium — down more than 28 percent from the current cycle, which ends June 30.

The bottom line for public employees is that your health insurance won’t change in the next two years, outside of increases in co-pays and deductibles.

Besides the re-bid on health insurance in two years, HB 1023 also sets up a new committee to study health-related issues in the next two years. It’s called the Public Employees Healthcare Coverage Committee (PEHCC, for the avid acronymists — editor’s note) and will be made up of six members of the House, six members of the Senate and up to four members appointed by Gov. Doug Burgum. That committee will report to the current PERS Board — which maintains ultimate authority.

Again, Rep. Carlson would like the state to switch to a self-insured plan. I’ll included remarks made by NDU President Nick Archuleta, which I’ve included in prior updates to help you understand the difference between what Carlson and others in the House want compared to what we have now:

“Right now, the PERS health plan is a fully insured hybrid plan, and Sanford assumes all the risks. When expenses come in less than expected, PERS splits the profits with Sanford. If PERS switches to a self-funded plan, then a company like Sanford or BCBS would administer the plan but PERS would assume all the risk and keep all the profits, if any. Most large businesses and school districts in the state are self -insured. Every other state that offers insurance to its employees is self-insured, so I’m told. Rep. Carlson wants NDPERS to be a self-insured plan because, he claims, N.D. would be better suited to control its costs and spend less for the same coverage. What we are in the process of figuring out is how that could happen without diminishing the coverage currently provided for by the PERS plan as it is set up now.”

NDU’s position has been to support a study of the issue in the 2017–19 interim.

The University System bill was also saved for the final day where it finally passed the House with an emergency clause.

Overall, the budget was cut (on average) 8.3 percent for the 11 institutions. That does not include the two allotments, which would push that number to around 15 percent. And the final budget numbers vary campus by campus.

Rep. Mark Sanford said on the House floor, as I reported in the last two legislative updates, that over 400 positions will go unfilled. That includes 90 full-time equivalents (FTEs) that will see their jobs cut. Sanford said to House members he expected that number to grow.

As I mentioned earlier, Dickinson State (which was facing up to 40 percent cuts & has had significant financial trouble recently), was essentially fully funded and given a hold-harmless clause.

In an issue of fairness, lawmakers found some money for the other 10 institutions.

That includes $2 million in Challenge Grants and another $2 million in campus operation funding — a total of $4 million to share between the ten institutions.

The NDSU/Sanford Nursing Program in Bismarck was saved after facing a cut, and the building lease in Bismarck was renegotiated — saving the state $1.1 million. The move restored $2.4 million to NDSU’s budget.

The bill includes a study of nursing programs statewide. Currently, nine of the 11 institutions have a nursing program. There is also a study to look at the reorganization of two-year schools.

Finally, the Theodore Roosevelt Library project was given $750,00 for operations and a break-ground deadline of Dec. 31, 2018.

The House and Senate adjourned on Day 77 — meaning they have banked three days in case they need to come back. That work would deal primarily with potential changes to the Affordable Care Act.

It’s been an honor to work on behalf of all NDU members. I’m proud of the work we’ve done together this session. Under the leadership of Executive Director Chad Oban and President Nick Archuleta, our lobbying team (Fern Porkorny, Jane Rupprecht, Sarah Keiser Johnson and me) has worked hard to represent the intentions of our members with professionalism and class. I watched our team at work every day, and I’m happy to report they served you well.

Special thanks to all of you. North Dakota United took a very deliberate effort toward engaging our members in these legislative fights. That meant identifying and recruiting activists, pushing out information about the legislative session in ways that we’ve never done it before, and asking you all to be vocal and active when legislation came up that needed our support, or opposition. And you responded in numbers we haven’t seen before. (THANK YOU. And let’s keep talking! The public and policymakers in our state want to hear from you, the proud public workers of our state. We are North Dakota, and we are United. — last editor’s note)

Monday afternoon, Nick and I will be back on Facebook Live at 4:30 p.m. CDT. I hope you’ll join us and ask any questions you may have. You can also e-mail me at tom.gerhardt@ndunited.org .

United, we can make a difference!