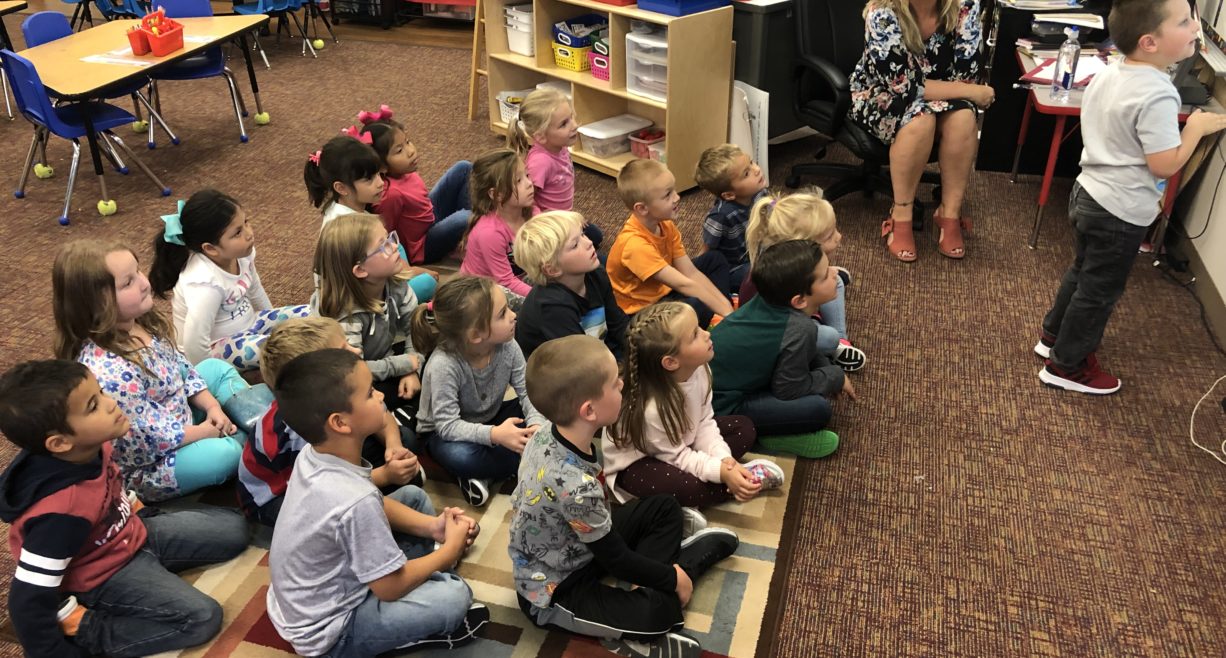 The same is true a few blocks away at the local elementary school.

This sign in the hallway tells the story. The total number of kindergarten students has grown 133% since 2012. This year, there are nine kindergarten teachers, up from four in 2012.

“I think for next year, for sure we’ll be at 10, but we’ll also have two elementary schools. Currently we have a second elementary school just south of our new high school, and it has enough sections for five of each grade level,” says kindergarten teacher and NDU member Pam Moen. “Our predictions are that the schools will be at capacity even with the new school built.”

Pam Moen is the veteran kindergarten teacher in the group. A North Dakota native, she taught near Las Vegas for close to 20 years and knows the ins and outs of booming growth.

“Yes, we have kids that have come directly from Portugal, Brazil, China, Togo — quite a few different countries — and then all over the United States,” Moen said.

Delanie Hill grew up in the Twin Cities but moved with her husband to teach here. She says teaching in Watford City comes with a unique set of opportunities and challenges.

“My very first year here I only had six kids on the last day of school from my first day of school,” Hill said. “That’s how many kids had moved out.”

“When I first came here, I taught first grade and I had a little guy who had started the year in Watford, and then in October moved to Texas and then in March came back here to Watford and then the following year did it again. So, I guess with their family, they are following the pipeline, and so every school year he was in at least three classrooms. So, that’s really hard for not only him to make friends but also to keep up academically,” Hill said. “And then for teachers, you’ve got to, when you first get them, figure out where the holes in his foundation are and try and get them caught up ,and as soon as you start doing that, then he moves again.”

The number of students moving in will continue to fuel growth in Watford City. Projections show kindergarten and district-wide enrollment nearly doubling again in the next decade.

“I think it’s good because we get all sorts of cultures that come in, and we get to learn about other different cultures. Where we kind of (in) our bubble of Norwegian-Germans, we’re beyond that Norwegian-German North Dakota,” Moen said.

These halls at Watford City Elementary, and soon at the new elementary, will be bustling with students from all over the world. North Dakota United members like Pam and Delanie will continue to invest in each student to provide the best education possible.

“I think our school has done a really good job of making sure that every kid has someone that knows them,” Hill said. “We have people greeting them at the door, we learn their names and then academically we do what are called intervention groups. So, we are grouping the kids and changing those groups throughout the year to make sure we’re getting everyone where they need to be by the end of the year.”