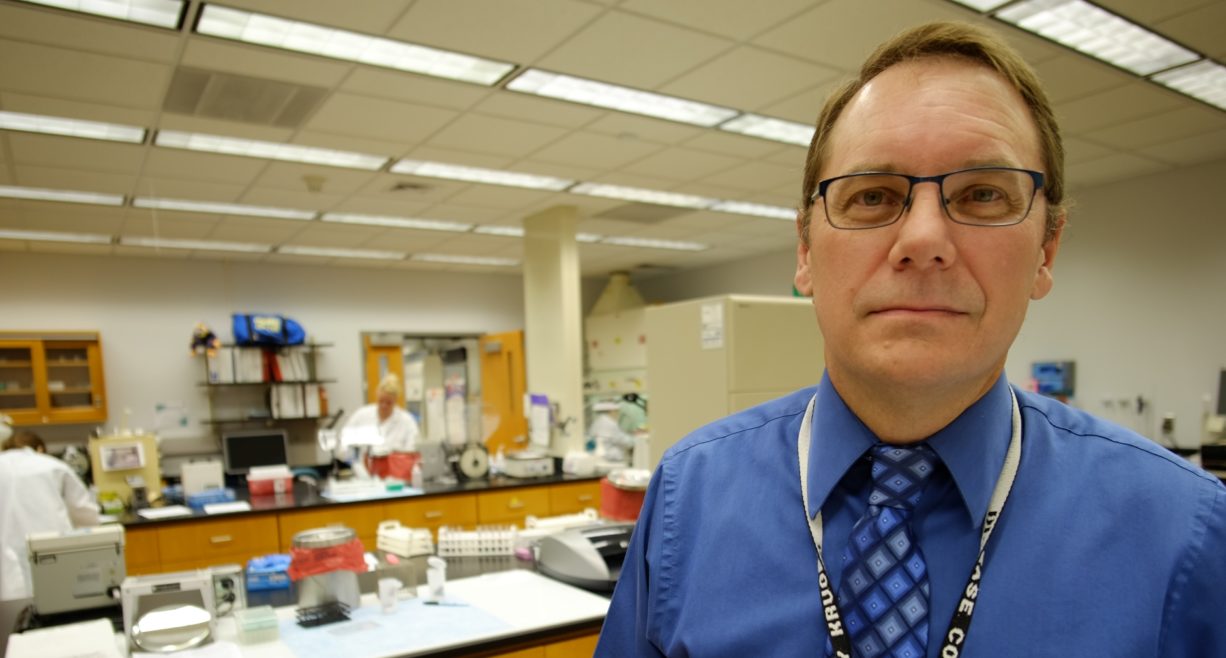 What do you do to stay healthy?

Whatever you do – exercising regularly, eating a balanced diet, taking vitamins, getting regular checkups – you should know that you’re not working alone. Public health professionals are at work every day, on the state and local level, protecting your health and the health of the entire population.

“Public health has the obligation and the mission to work not specifically with individuals, but with entire populations, and to keep communities and populations healthy,” said Kirby Kruger, Medical Services Section Chief and Director of the Division of Disease Control for the North Dakota Department of Health, and member of North Dakota United. “I think that public health has to work very closely with the private healthcare system. The private healthcare system has a mission to see the individual patient, to diagnose them, to work with that patient. … The two systems have to work hand in hand to make a complete approach to health care and policy; they’re not separate from each other.”

Kruger is a native of New Salem.  He received his bachelor’s degree from North Dakota State University and his Certificate of Public Health from Emory University. He has worked for the Department of Health since 1989, starting out as an HIV educator. “I sort of stumbled into public health,” Kruger said. “I was teaching high school science in Sykeston, and my wife was working in a small-town hospital laboratory, and she was looking at getting into a bigger area. And so we made the move to Bismarck, and there was a position open for HIV/AIDS educator with the Department of Health, and I applied and was offered the job. That was how I entered public health.”

In his 26 years at the Department of Health, Kruger has worked his way up to taking a leadership position at the department. He became the injury surveillance coordinator in 1990, and then program manager for the sexually transmitted disease and general communicable disease programs in 1991. In 2000, he took on the role of senior epidemiologist for the Division of Disease Control, and then became the state epidemiologist and division director in 2005. Finally, he became section chief of the Medical Services Section in 2010.

A lot has changed since the time he first started working for the state, in terms of technology and scientific methods. “There are so many more molecular laboratory methods,” Kruger said, “where they’re looking at snippets of the genetic material in organisms to identify the organisms, and that give us so much more information. That technology increased quite a bit, since I’ve been with the department.”

What hasn’t changed is the overall mission of his Division of Disease Control: to monitor infectious diseases within our state, and to protect the population from outbreaks.

“The Division of Disease Control handles a lot of different things,” Kruger said. There are currently 77 different diseases, conditions or events that private healthcare providers are required to report to the Department of Health. “One of the things that’s changed in the last year is how we get those reports. We’ve been able to work with many of the major laboratories that do medical testing to get electronic reporting. We have an electronic disease surveillance system. And they’re able to send us specialized messages that we can import into our database.”

Once those diseases are reported, the Division of Disease Control goes to work in researching these results and analyzing trends. “We have seven field epidemiologists, plus we have epidemiologists here in the central office assigned to specific programs” Kruger said. “The field epis, have a  work queue in the data system, and they’re assigned to investigate the diseases that are in their geographic area. They can go into their work queue multiple times per day and see what diseases are being reported.”

Different diseases require different responses. “If you get a measles report, that’s high priority,” Kruger said, “or meningococcal or infectious syphilis, those are things that are higher priority. If it’s something where the disease isn’t easily transmitted from person to person – for example, Hantavirus- it’s a serious disease, but they generally occur in isolated cases, so it is a lower priority.”

Another primary function of the Division of Disease Control is trying to prevent diseases from occurring. “The ideal with diseases is to have primary prevention, where we’re preventing the disease in the first place,” Kruger said. “And the best way to do this is through vaccinations. Our goal is to see that as many people as possible, both children and adults, receive the recommended vaccines at the recommended times. We do that by educating the public about vaccines – either directly or through health care providers – and by making it more convenient to get vaccines – by increasing the number of sites that offer vaccinations and providing free or no cost vaccines, particularly to those who cannot afford them.” The department also tracks vaccination rates and sends notices to those who are due for their next vaccines.

Vaccinations have been a hot-button issue in the news recently, following a measles outbreak at Disneyland, which then spread to 20 states. No cases of measles have been reported in North Dakota as of yet, but the Department of Health is keeping a close eye on the situation.

“One of our main concerns here in North Dakota is that some highly infectious diseases, like measles, have a lower vaccination rate than we would like to see,” Kruger said. “To protect the entire population, you need to have a 95 percent vaccination rate in the population, which provides what we call ‘herd immunity.’ Our school surveys indicate we have about a 90 percent measles vaccination rate, so we are concerned that if measles does get introduced, there could be an outbreak. In that case, the individuals that are not fully vaccinated are compromising the herd immunity that is achieved at that 95 percent rate.”

“Influenza A viruses are notorious for being able to change,” Kruger said. “We saw that last influenza season.  New vaccines are made every year to protect against the influenza that is expected to be dominant that season.  In order to match the vaccine to this season’s influenza, scientists have to make their best prediction on the type of influenza that will be circulating six months before the season starts. To get a good prediction, the World Health Organization surveys influenza circulating in the southern hemisphere and gets that information to the CDC so the CDC can formulate the appropriate vaccine. Most of the time the vaccine is a good match to the influenza that is dominant for the season, but sometimes it is not, as we saw this past season.  Still, a vaccine that is not matched 100 percent with the seasonal flu can still be effective in lessening symptoms and protecting against the flu it was designed for.”

The key to everything that the Department of Health and its Division of Disease Control do is having experienced, knowledgeable and passionate personnel in place, doing all they can to protect the citizens of our state.

“I feel fortunate that the employees who work for disease control are very dedicated,” Kruger said. “A lot of the work that we do goes unnoticed until something bad happens. For example, when Ebola emerged, there was a lot of public concern about that. We were responding to Ebola in the background, so the public probably wasn’t aware of what we were doing, such as monitoring people coming in from other countries. ”

Kruger said he is thankful to have found a position that keeps him on his toes, and allows him to give back to his home state and the people who live here. “This has been a very challenging, rewarding position for me,” Kruger said. “I’ve learned so much, I think being able to do this for the state of North Dakota has really been an absolute privilege and a pleasure.”