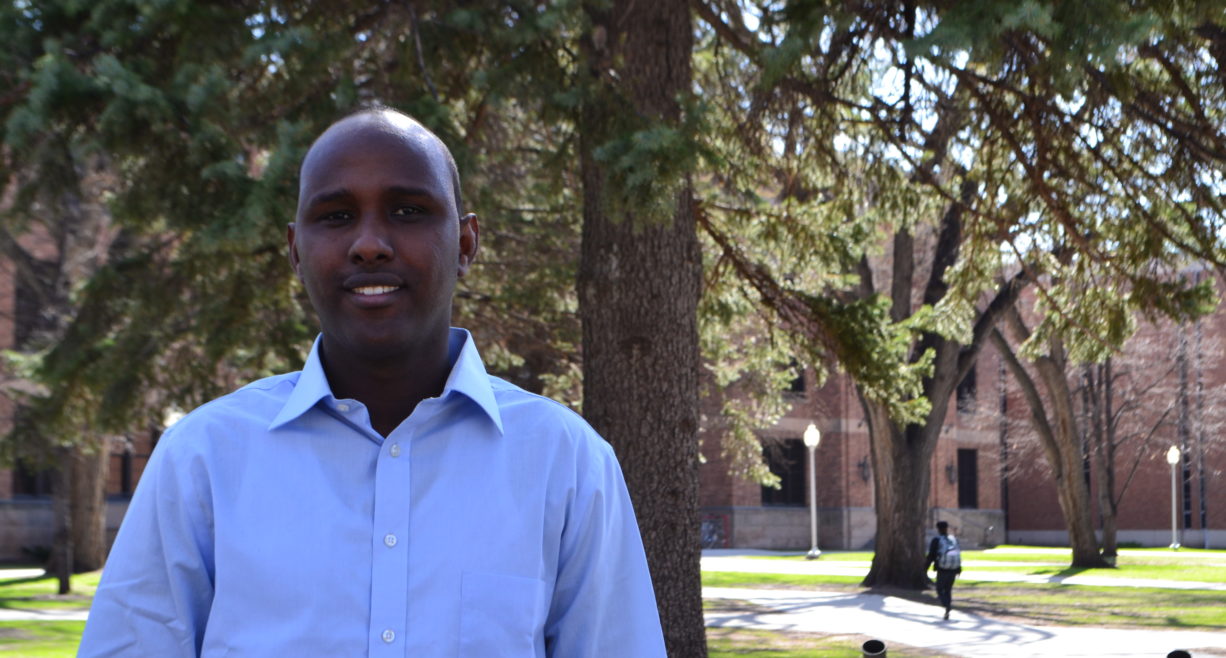 Inspiration is the primary goal for Hassan Abdi. As a paraprofessional for Cheney Middle School in West Fargo and ESP member of North Dakota United, a full-time student in education at Minnesota State University-Moorhead, and an immigrant to the U.S., a refugee originally from a war-torn community in Somalia, Abdi is driven each day to be an inspiration of what any person can accomplish with the right attitude and proper motivation.

“I want to educate the Africans suffering both here and there, whose parents don’t have an education,” said Abdi. “I want to be an inspiration for them. So they see me teaching at a school, they understand that Hassan, one of the refugees, who grew up without a dad and with a single mom, can do it, then we can do it, too.”

Abdi was born in Kismaya, Somalia, in 1982. His actual birth date is unknown to him, because there was no record kept for births in his home country.

A civil war erupted in Somalia when Abdi was still very young. His father, Mustaf Abdi, was killed by warlords in 1991. His mother, Shamso, his older sister, Nadifo, and younger brother, Omar, were forced to walk to Kenya in order to escape the violence, and they took refuge in a camp run by the United Nations. 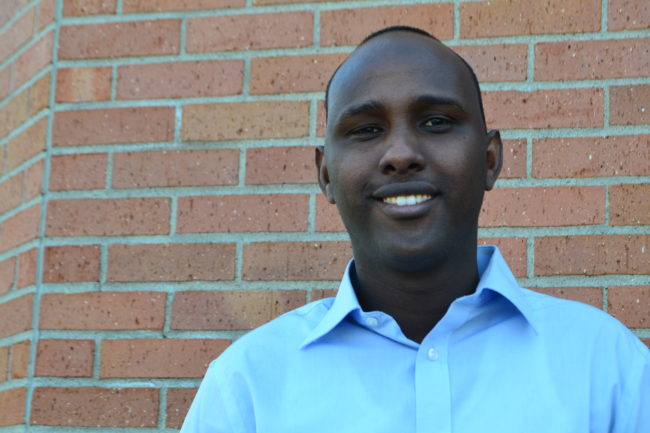 Abdi was able to attend school in the refugee camp in Kenya, and graduated high school in 2006. After finishing school, his family was given the opportunity to immigrate to the U.S., and they were brought to live in West Fargo. “During my years in Kenya, and through the strong example set by my mother, I became a man who will be able to succeed in whatever I try to accomplish,” Abdi stated. “I believe that hard work and perseverance will bring rewards, and this is what I want to instill in my students when I become a teacher.”

Abdi went to work full-time at Marvin Windows, in order to support his family, while also attending Moorhead State Community and Technical College, pursuing a degree in business. After three years, he completed his degree. But upon achieving his goal, he felt like it wasn’t quite what he wanted. “I was in business, but I see life in business as being very tough,” he said. “In America, it’s all about who you know. And I don’t know anybody.”

He turned his eyes toward the aspiration he had long valued and pursued, and was the primary reason that he and his family had traveled so far and struggled so much to achieve: education.

Education is the key to success,” Abdi says, unequivocally. “Nobody’s going to succeed without education. Education will help you a lot. Since I suffered a lot back home and here, I want to help those guys who are helpless, the innocent kids in the refugee camps, who have never been helped a lot. Those kids in the refugee camps, nobody cares about them. They die without an education. But if they are given an opportunity, they can change it. So I want to help the people in the refugee camps who have been denied their rights. The sooner I can do that, the sooner I graduate, I want to go back and help those innocent kids that need help.

Abdi is now enrolled at Minnesota State University-Moorhead, pursuing his Bachelor of Science degree in education. He aspires to be a math teacher, and return to school to become a counselor. “My hope is to make a positive impact in building better relationships between African immigrants and other Americans,” he said. “My long-term goal is to earn a doctorate in education from UND in Grand Forks.”

While attending classes at MSUM, he also works as a paraprofessional at Cheney Middle School in West Fargo. He came to his job at Cheney through a chance encounter with Gail Haug, a special education teacher at Cheney and the president of the West Fargo Education Association.

“One day, what happened was there was a neighbor who is a mom, she had to meet with the school about her son from Somalia,” Abdi recounted, “and I can translate in Somali. She told me to give her a ride to the school. We met with Gail Haug, we talked to her about a lot, about this kid. I advised the kid. I’m a very good advisor. I am a very good counselor. I advised the kid, I said, ‘Hey, listen, you must be better than this.’ I basically advised the kid by motivating him a lot, inspiring him a lot. So because of that, Mrs. Haug thinks that I can help this kid. So then Mrs. Haug called me and asked me, ‘Hassan, do you want to work as a paraprofessional?’ And I said yes. Then she helped me to apply for the job.”

Abdi’s primary work duty is working directly with the student he first accompanied to the school to meet with Gail Haug. “I just kind of made a relationship with him,” Abdi said. “I always tell him inspirational stories, stories that are going to make him happy to succeed. I don’t yell at him, but I just make him happier by telling him that he can do better than this. I make sure that this young man succeeds at his life.” He works with other refugee students, in translating and setting a good example for them. “If I see them do wrong,” he said, “I supervise them by telling them my story so that they can succeed in life.”

The example he sets is powerful, according to Haug. “Hassan has provided my student with an opportunity to develop self-discipline and academic learning in a way that no other teacher has been able to accomplish,” Haug said. “Hassan has made a wonderful connection with this student. Since Hassan started in January, my student has gained both academically and has increased in his self-esteem. Hassan has gained the respect of this student because of his unique ethnic familiarity and kind, firm personality.”

Assistant Principal Adam Gehlhar echoes the esteem and praise that is given to Abdi based on his work ethic and positive attitude. “As a ‘one-onone’ paraprofessional, Hassan goes above and beyond in understanding and developing solutions to meet students where they are at,” Gehlhar said. “Hassan exemplifies compassion and advocacy for all students, maintains high expectations for himself and others, and relates well to our New American populations. He is a lifelong learner; his value of education is infectious to students and staff with whom he interacts.”

Abdi was selected as the recipient of the North Dakota United Foundation Ethnic Minority Scholarship, this past April. He received $1,250 – the highest amount given to an undergraduate applicant by the Foundation among this year’s scholarship winners – which will go toward the costs of his college expenses at MSUM.

Haug served as a reference for Abdi’s application for the scholarship, and admits to harboring a “bias” toward Hassan. “He, his wife and newborn baby have become like a family to me,” Haug said. “It is refreshing to be in the company of this man who appreciates every little act of kindness. I fully believe that Hassan has a bright future in education, and will return the favor through active participation in North Dakota United and in the field of education in general, now and in the future.”

Abdi is incredibly thankful for the scholarship, and for the opportunities he has earned for himself through his dedication and strong work ethic. He said that he intends to embrace the trust and support he has been given by his colleagues at school and in the union, and to use these gifts in order to inspire those fortunate to have heard his story. “I believe that I can become an effective teacher, especially for those new American students who have had experiences similar to my own,” Abdi said. “I am proud to be an American, and I look forward to a great future in this country for me and my family.”