2022 North Dakota Teacher of the Year finalist Matt Nielson of Valley City encourages his students to think critically and problem solve in his classes. 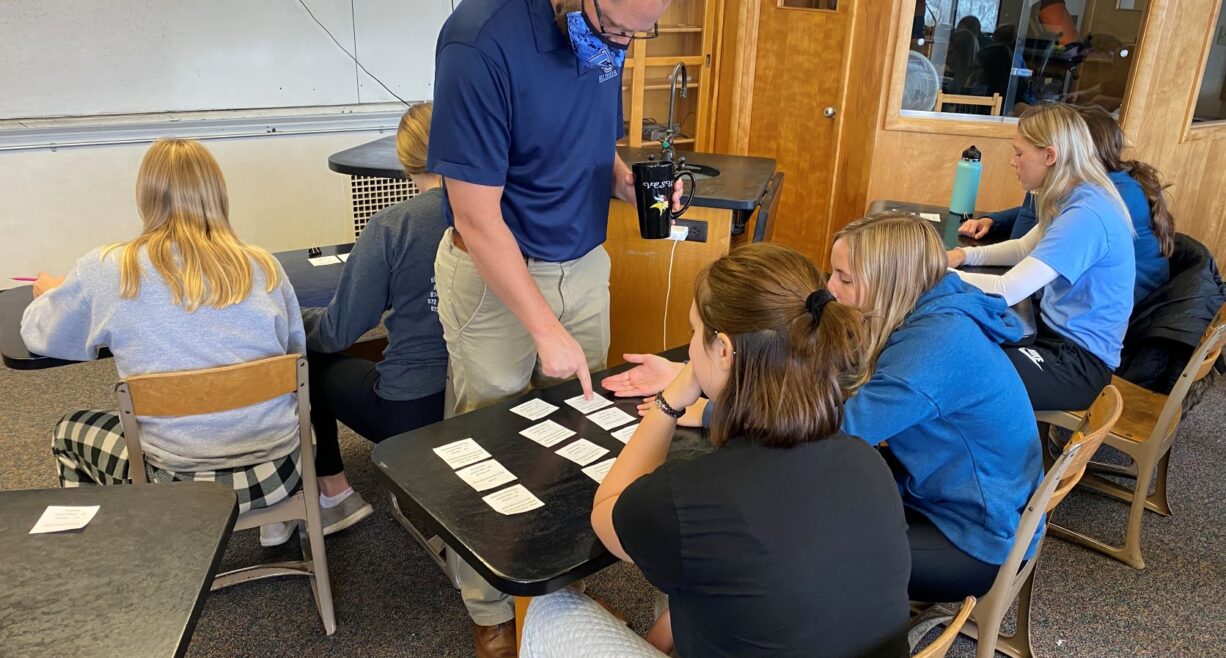 Nearly four thousand feet long and 162 above the river, building this engineering marvel required a lot of critical thinking and problem solving.

Nearby at Valley City High School–those are the exact skills chemistry, physics and STEM teacher Matt Nielson is teaching his students.

“A lot of it’s not about the chemistry, it’s it’s about the problem solving, abstract thinking, like I said, the logical thing. And that’s what really matters in the science class. It’s not. It’s not about all of we are helium and hydrogen. It it’s about, can you think, can you persevere? Can you figure things out? Because when you get to college, that’s what matters.

Speaking of problem solving, critical thinking, and logic, in this lab students put all those skills to work.

Each of these cards represent ten fictitious elements Nielson created and you can see and hear the engagement in the room.

“And they got to put together a periodic table based on those elements where they had to find the pattern themselves and they had to develop that,” Nielson said. “How is this working? They work together with a partner. They had to debate it out. And then even at the end, even when they were right, I told them, Nope, you’re not right yet. So they had to actually like, look through it again and have that determination to go, ‘Hey, Mr. Nielson, I’m right. And here’s why.’ Which was great for them to get to that point.”

Your engagement goes up, learning goes up. Your discipline problems in the classroom go down,” Nielson said. “I think we’re still stuck in that traditional grades of, oh, here’s your ABC, here’s a completion points, which doesn’t lead to motivation for students. It leads to cheating. It leads to just, well, I’m just going to cram it and be done instead of to true learning environment.”

Relationships are another key. Nielson says along with seeing students grow, building those connections is why he teaches.

“Follow your passions and do what do what makes you happy. And I look at teaching that I get enjoyment every day here. I get fulfillment. Every day of my cup is filled every day. There hasn’t been one day in six years where I woke up and I said to myself, I don’t want to go to school, so I know I’m exactly in the right spot, and I hope I can get the students to find that passion to help them leading to that passion. It’s not teaching, it’s fine. But the more adults that they know, that care about them, that kind of help them along their path.

Nielson is a Hi-Liner through and through. He grew up in Valley City, went to high school and college here, served his country, and now teaches here. Who says you can’t go home again.