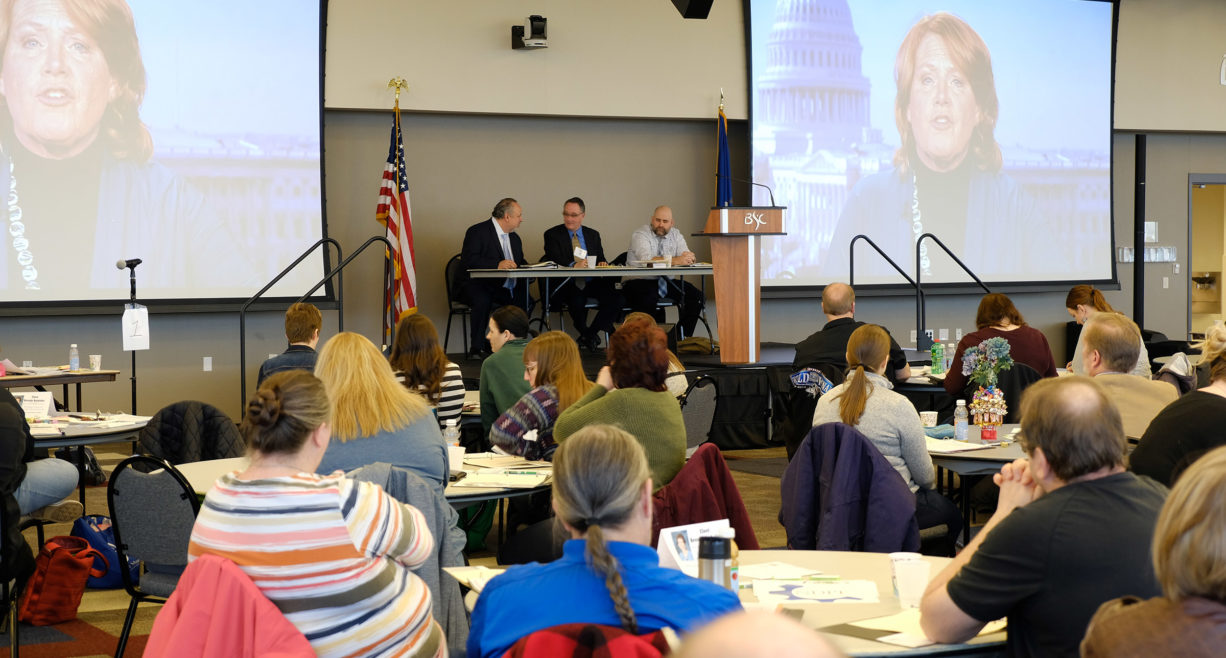 BISMARCK, N.D. – North Dakota United, the union of 11,500 public educators and employees statewide, bi-annually hosts its Delegate Assembly each April, bringing together members from all across the state in the same place and charting the course of our union for the next year.

This year’s NDU Delegate Assembly was held on Saturday, April 14, at the National Energy Center for Excellence, on the campus of Bismarck State College. At this event, NDU members presented their two highest honors to two of North Dakota’s best. Sen. Heidi Heitkamp was named as the Adrian R. Dunn Friend of Education, and former executive director of the North Dakota Public Employees Retirement System, Sparb Collins, was awarded as Friend of Public Employees.

“I am so proud of both Sen. Heidi Heitkamp and Sparb Collins, and their service to our members and the citizens of North Dakota,” said ND United President Nick Archuleta.

“Senator Heitkamp has been a stalwart supporter of public education her entire career,” Archuleta said. “She is the product of a great public school and public university education, and has credited that education for the successes she has experienced throughout her career in public service. Furthermore, she demonstrated her support for teachers when she bravely voted against the confirmation of Betsy DeVos while insisting that President Trump appoint a qualified candidate with a background in public education. Public education at every level continues to be served by Sen. Heitkamp’s thoughtful and educator inclusive service.”

“Growing up in the small, rural town of Mantador, I personally understand how valuable a public education is, especially for students in rural communities,” said Heitkamp. “Thank you to North Dakota United for this award. One of my guiding principles in the U.S. Senate is that we must all look up so that we aren’t just thinking about the day-to-day work, but rather looking to the future we are creating for our children, so we are setting them up for success. And that’s a goal North Dakota United and I share and work toward every day. We need to strengthen and support our public-school system and help every student thrive – and I’ll keep working toward those goals.”

“Sparb Collins is the epitome of responsible, inclusive, and caring public service,” Archuleta said. “As the Executive Director of ND Public Employee Retirement System, Sparb has been the steady hand on the tiller guiding NDPERS through the often-tumultuous seas in which retirement and healthcare systems operate. His calm demeanor, unsurpassed knowledge, and innate ability to explain very complex matters to skeptical lawmakers, instilled confidence in everyone concerned with the solvency of their retirement and the quality of their healthcare coverage. Sparb had our back, and we appreciate him for that.”