‘It’s the Greatest Profession on Earth’

‘It’s the Greatest Profession on Earth’ Wahpeton teacher is one of two NDU members... 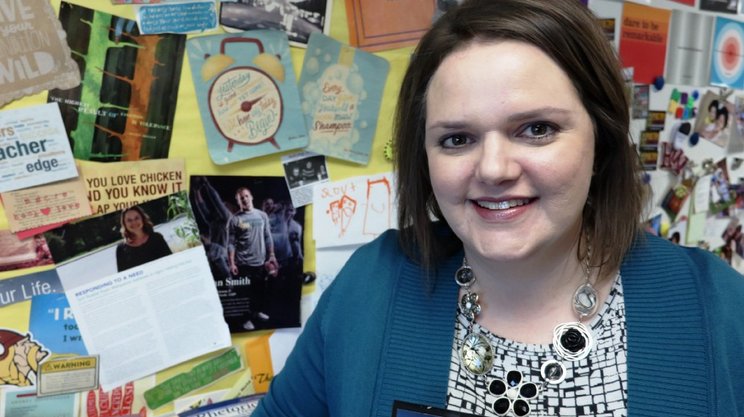 ‘It’s the Greatest Profession on Earth’

There was never a question about what Wahpeton English teacher Heather Woods wanted to do when she grew up.

“I can’t think of ever wanting to be anything else, and I attribute a lot of that to my own parents, they were not teachers but education was always important in our house. I just felt like, even though they weren’t in that profession, they helped push me toward where I ended up,” Woods said.

It turns out, Woods made the right choice. She has been in the classroom since 2003 and currently teaches juniors and seniors. This summer she was awarded the 2017 North Dakota Council of Teachers of English Teacher of the Year, an award she shared with Missy Miedema of Grand Forks Central.

“It completely caught me off-guard,” Woods said. “In fact, I actually just finished being the president of the organization, so I felt as if I knew everything that was going on and then it just took me by surprise that they had done it without my knowing.”

Woods says she was humbled and honored to receive the recognition, especially from a group of peers. It was her co-worker and fellow North Dakota United member Kristi Mahrer who nominated her for the award.

“I just really look up to Kristi, and whenever I have something that’s kind of stumping me in my class she’s the first person I go to,” Woods said. “I know that a lot of people in our school feel that way about her, too. So that was just icing on the cake to find out that she had nominated me because I respect her so much.”

Humor is a key to Woods’ classroom success. She says when she surveyed her students last year they told her they thought she was funny.

“I think humor is a big part of it,” she said. “I have a dry sense of humor, and I think that relates to students. I can make fun of myself, too, so I like to bring that in. I try to be a little bit funny; I was in theatre in college so I always feel like I’m on stage when I’m teaching, and I try to keep that in mind that my own facial expressions and words and tone set the tone for my classroom.”

Each day in the classroom is different, and Woods says she likes that she has a say in what happens. She also enjoys looking for ways to improve lesson plans by reflecting upon what went right and what could have gone better. But she says it’s the students that keep her coming back day after day and year after year.

“Obviously the students are the best part because you get to know them,” she said. “You get to form a relationship with them, and then you get to see what they do with their life … with social media it’s easy to keep track of people.”

Making lessons relevant to her students is important to Woods. Right now, juniors in her American Literature class are reading “The Crucible.” She wants her students to know things that happened to people hundreds of years ago are still happening in their lives today.

“The main character in ‘The Crucible’ is falsely accused, and a lot of people in that play are falsely accused of doing something that they didn’t do,” Woods said. “And so, I think that’s something students can relate to and they all know of maybe a time that happened to them or a time they watched that happen.”

North Dakota United has played a key role in her teaching career. Her husband, David, is an NDU member and served on our Board of Directors. He is an English teacher at Woodrow Wilson alternative school in Fargo.

Heather says it’s important to be a part of your professional organization. She says it’s helped her become involved at the local level, at one time serving as president of the Wahpeton Education Association and helping negotiate contracts over the last several years.

“I remember a couple of times we would caucus and we called [our UniServ/Field Representative Deanna Paulson] right there outside of regular office hours. She’s always willing to help,” Woods said. “Sometimes it’s important to look past the local and onto a bigger picture, and she (Deanna) might say, ‘Well, I know in this town they’re doing this,’ or ‘I was just with a group yesterday who decided this.’ And some of that information is important too because we know what’s going on outside of our local.”

Woods also has two sisters who entered the teaching profession, including one, Trudi Glynn, who is still in the classroom in Wyndmere and is also an NDU member. Her other sister, Jeena Kompelien, is a former NDU member who is now a stay-at-home mom.

A mother of four, Woods says she won’t hesitate to encourage her children to become teachers.

“I think it’s the greatest profession on Earth, and I would be honored if one of my children decided to be a teacher.”