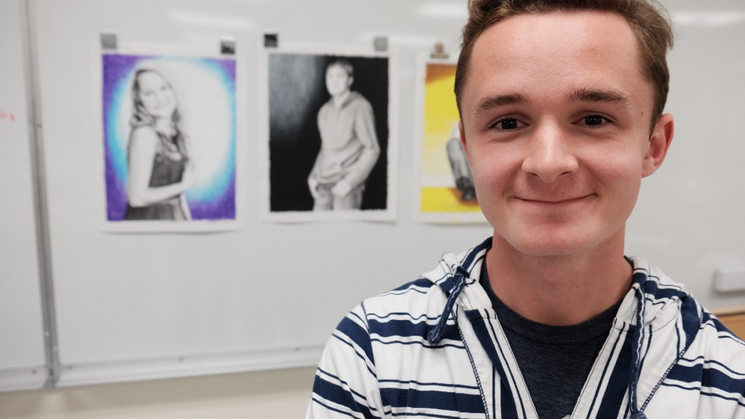 Art imitates life. It’s easy to see this with a quick glance at Brennan Tyler’s charcoal portraits. The recent Century High School graduate decided to pay tribute to the 11 seniors in his Jazz Choir through his Advanced Placement (AP) Art Class.

The assignment allowed Tyler to merge two of his passions.

“I’ve gotten the most solid friendships from music; I guess this was a way of saying ‘thank you’ for those friendships, so it was a way to tie art and music together,” Tyler said.

“I think it was about three weeks ago, he unveiled them in the class and there were a lot of emotional people and some emotional teachers that were very happy with that. It’s just the kind of student he is. Not only that, he’s given each one of them a copy of it,” Lies said.

Mary Pat Archuleta, director of choral music activities at CHS and NDU member, was one of those emotional teachers. She said Tyler presented the portraits on the last day of Jazz Choir and that it brought her to tears.

“Brennan took the time to present each of the pictures to each student individually, telling why he used certain background colors for each of his friends. In doing so, he described how the colors he chose depicted their unique personalities. He complimented each student and thanked them for their friendship. It was really special to watch,” Archuleta said.

The portraits are life-like; I did a double take looking at the drawing of my own son, Gabe.

Tyler chose yellow for him, calling him a “vibrant guy.” He chose orange, a combination of red and yellow, for Andrew Skogen, saying the two colors unite passion and vibrancy. Tyler saved a special color for the person he knows the best.

“Tommy Brink — his is blue. And I chose blue for him specifically because blue stands for loyalty and trust, and he has been my best friend since way back when, so I chose blue specifically for him,” Tyler said.

A project like this doesn’t come together overnight. Tyler says after deciding last fall he wanted to do something nice for the seniors, he got to work.

“I thought I worked pretty diligently, because I started drawing up the first ones over Thanksgiving weekend. I’d estimate maybe over 40 hours on each one; that’s my rough estimate,” Tyler said.

Tyler says because he has such personal connections with the people in the portraits, he had intense motivation to finish. He says his love for art goes back to elementary school, and Brennan credits his teachers, his involvement in extracurricular activities and his parents (Jim and Karen) for shaping him.

“I’ve learned discipline from cross country and track. Distance runners are probably some of the most disciplined athletes that high school can offer. That and my awesome parents, of course, they teach me how to manage my time. I don’t always listen, but I try,” said Tyler with a grin.

Tyler says he always had a knack for drawing and enjoyed illustrating scenes from movies. He says he got the talent from his mom, but never took lessons when he was young.

“I plan to minor in art. I can’t say goodbye to art. I want to have something to fall back on that I like to do,” Tyler said.