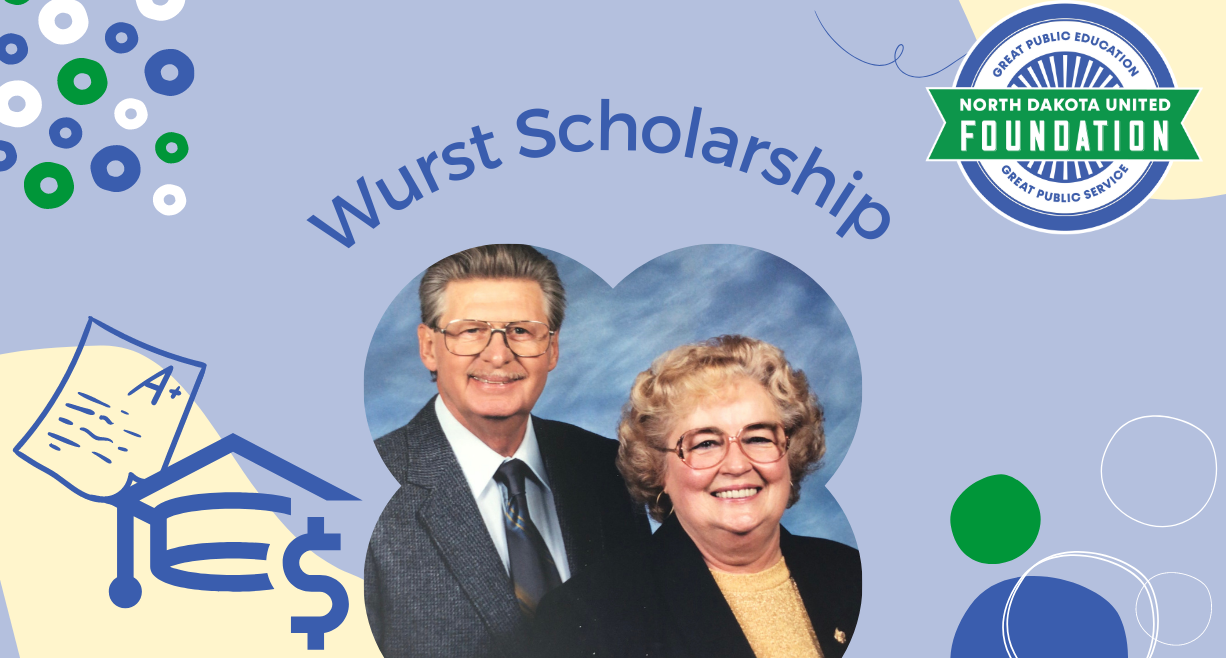 Thomas Wurst was born during the Great Depression, on March 1, 1932, and grew up on a homestead near the tiny rural community of Jessie, ND. Like most young men at the time, he felt pressure to stay on the farm, which he resisted.

He was looking for an opportunity to go in a different direction, and it was a teacher who provided him with one.

His cousin, Kathy Antonelli, was a long-time member of ND United and the North Dakota Education Association as a science teacher in West Fargo.

“(Thomas) graduated high school in Binford,” she said, “and the typing teacher came to him and said, ‘Would you please take typing? Because otherwise I’m not going to have a job.’ Because they had to have a certain number of students to keep their job, so he took typing from this teacher. And then when he went into the Marines – I think it was the Korean War then – that got him a job working in an office, when they found out he could type. So, he would always kind of joke and say that that saved his life, by taking those typing classes and being able to type.”

After completing his service to the Marines, he worked on the construction of the Garrison Dam for a few years. He then moved to Illinois to take a job with Bell Telephone, and he met Garnet Blosser, the woman who would become his partner for life. They married in 1966 and operated a gun and antique shop for several years. In 1972, they began working in Garnet’s family business, selling automotive parts and running a machine shop.

Thomas and Garnet were successful enough in their businesses to retire in the early 1990s, and they moved back to the family farm near Jessie. For nearly 20 years, they enjoyed a comfortable retirement together at the Wurst
homestead and traveling to Florida each winter, until Garnet passed away in 2009.

In the years before Thomas Wurst died on June 5, 2020, in West Fargo, the legacy he would leave was likely at the front of his mind quite often. He first contacted the NDU Foundation in 2016 and started the process of setting up a memorial scholarship fund in his name.

After he passed in 2020, the probate of his estate and final distribution of its assets, totaling over $1 million, were used to establish the Thomas and Garnet Wurst Scholarship Fund in August of 2021.

This fund will go to graduating seniors at Midkota High School in Glenfield, ND, “to continue their education whether through college or a vocational/trade school.” Administration of the fund will be the responsibility of the NDU Foundation Board of Directors, in consultation with an Advisory Board of the Milford school’s staff and administrators, to distribute $40,000 annually to seniors in Midkota.

Though separated in age by 20 years, Kathy Antonelli grew close with her cousin Thomas after he retired and moved back to the state. She served as the personal representative for the estate transfer and said she thinks her cousin would be happy to see how much good will be done in his beloved home community with these scholarships.

“He would definitely be really happy if the students that got these scholarships went on, finished their education and did better in the world because of what he did,” Antonelli said. “That it would help students who maybe couldn’t afford to go to school to improve their lives … he’d be really proud about that. That’s really what he wanted was to give some of those kids an opportunity they might not normally have had.”