Food for Thought Fargo teacher sets up pantry in her school for students in... 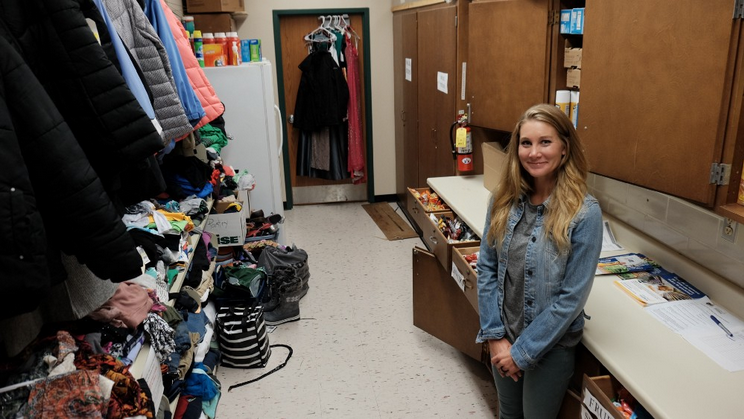 School can be difficult for most kids, but especially for those coming up through high school while struggling with poverty. At Fargo South High School, 41 percent of the students utilize the Free and Reduced Meal Program. That only represents the number of students whose families are willing to fill out the paperwork required to qualify. So, unofficially, probably half of the student population would qualify for the program.

The connection between poverty and student performance has been well-documented. When a child is not getting enough food to eat outside of school, they are termed as “food insecure.” The U.S. Department of Agriculture defines food insecurity as: “households that are uncertain of having, or unable to acquire, enough food to meet basic needs of all their members because of insufficient money or other resources.”

Fargo South science teacher Brittany Olson recognized the struggles of some of her students, and wanted to help. Along with the help of her colleague, and NDU member, Ariel Dowling, they have launched the Fargo South Bruin Food Pantry, for students who aren’t getting enough to eat at home.

“It started with Fill the Dome,” Olson said, “and we kind of do that in the Fargo-Moorhead community. And Fargo South is a low-income school. Every year we would do Fill the Dome, and I would kind of look at it and go, why are we giving this to the community when I know kids here could use it?”

She began to bounce ideas off Dowling two years ago about what they could do at Fargo South, and they applied for grants from Operation Round Up, which is a part of Cass County Electric Cooperative, and from Fargo Public Schools, and they received both. “Then as our paperwork was sort of filtering through those two pathways, it crossed paths with some people who work for the Great Plains Food Bank,” Olson said. “And through there, Jenae Menske reached out to us and met with us, since this was kind of the first in the state to really do a schoolwide food pantry for the kids, and incorporating a lot more than just the backpack program.

And so, we were fortunate enough to partner with them, which allows us to do ordering of food and other products through the Great Plains Food Bank, at a way reduced price.”

“They are seriously great to work with, and have kind of gone above and beyond what we expected them to do,” Meske said about the Bruin Food Pantry. “It’s been fun to see the big impact that they’re making there currently. I refer anybody who wants to do a school pantry; I always give them their information, because of the great job they’ve done so far.”

Donated items, including perishable and nonperishable food, clothing, hygiene products and household cleaning supplies, are stored in a large room inside South High School. “There’s a key that’s located centrally for staff,” Olson said. “So at any point during the day, staff can grab the key and either grab items for a student or bring a student in and go with them to grab items. Students also have an opportunity to sign up for the backpack program, and that would mean they get a bag of food every week on Fridays to bring home.”

When the pantry first started in December 2015, Olson said it launched slowly, because they had difficulties with finding students willing to take the donations. “It was hard to get kids to admit that they could use it,” Olson said. “But we made a few changes over the summer. We added some information into the registration packets that the ninth graders get, which is then a little more private, plus the parents then can see it, too. So, at the start of last school year, we got a lot of those forms back in the fall, and the forms just go directly to myself. And that’s only if they want to sign up for the backpack program, and right now we have a Google spreadsheet that is only viewable by myself, Ariel and then our two secretaries in the office, since they’re the ones who keep an eye on the backpacks every Friday to make sure the kids grab the right one and the student’s not grabbing one that’s not supposed to be grabbing one. But it’s only the four of us.”

One of the pleasant surprises that came with this project was the amount of student participation they have found. When she first started the program, the food pantry was located in Olson’s classroom, and she asked her students to help sort items during their study hall. “And every time I asked, all the kids raised their hand,” she said. “And then when we finally got a room at the end of the year, a couple of the kids who kind of routinely came to help asked if they could do it again the following year. I had some students who were willing to step up and do some ordering, or take a leadership role in some fundraising, and activities like that. That was completely unexpected, the students kind of stepping up that way.”

Olson attributes that to the atmosphere they have put out. “I would say the atmosphere we’ve worked to kind of create with this at South is non-judgmental,” Olson said. “All of the students know about it, but it’s still private. Especially the kids who pack the bags, they see the bags, and I’m sure they’ve passed a kid who is carrying one of those bags, but no one says a word. Which is really nice.”

The Bruin Food Pantry has information available online at www.fargoschoolsfoundation.org/Bruin-Food-Pantry.html, and you can even make a donation to the pantry at that link. Monetary donations are used for perishable food items; purchasing breakfast boxes, backpack program, family food boxes and food for the Summer Meals Program; toiletries; cleaning items; gas cards; bus passes; and other items as the need arises.

With Menske’s assistance through the Great Plains Food Bank, Olson has also talked to schools across the state about the idea of starting similar food banks for students in other communities.

“We’ve had other people from other areas, like Dickinson and Valley City, call in that they’re looking at starting some of these, too. So we’ve passed on what information we have. We’re still kind of learning.”

The lessons they’ve learned so far have been invaluable in raising the profile of the program, and increasing the amount of good they can do for their students and families who need help.

“Right away, you could tell with some kids, they’re a little more focused, less stressed, less anxiety on their end about things outside of school,” Olson said. “They could focus a little bit more, knowing that at least some of their basic needs were going to be met. And then this last year, a couple kids, they’re so thankful. And even behaviors on some of them, the gratitude that is there now that they’re finding school to be a positive place.”

She is equally thankful to everyone who has helped make the Bruin Food Pantry what it is, and will continue to be. She said that she can’t pick any one moment from the last two years of planning and implementing the food bank as feeling the most fulfilling.

“I think it’s seeing the kids who need it, use it,” she said. “And the other group of kids who are more than willing to help out and volunteer.” And she hopes her story will inspire similar programs in schools for kids who need them. “Take from it,” she said to anyone reading her story who feels inspired, “and invest in our youth. They’re the ones who are going to be our future leaders out in the community. And think about how you want those students to be out in the community, and set the example for them.”