English Teacher of the Year Promotes the Value of Reading

English Teacher of the Year Promotes the Value of Reading Grand Forks teacher is one... 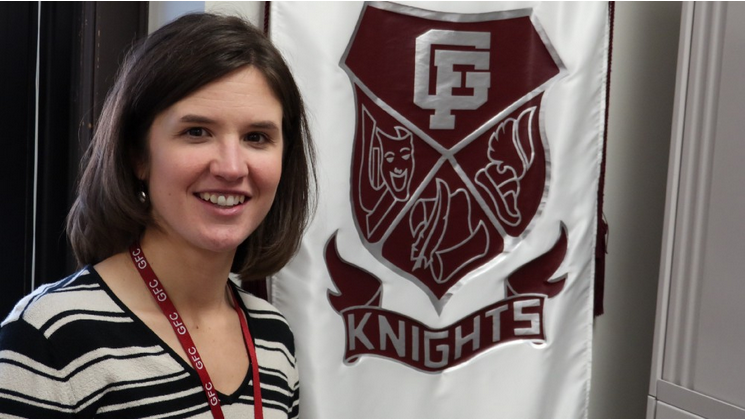 English Teacher of the Year Promotes the Value of Reading

“I was a doctor wannabe until my first semester of college,” Miedema said. “I got into a chemistry lab, and three hours of chemistry lab didn’t do it for me. I knew I couldn’t go for four and eight more years doing that.”

When her parents asked her, “What is it that you love to do?” Miedema found her answer.

“I love, not only reading and writing and communicating, but also working with other people,” she said. “Looking at teaching seemed to be this merger of all the things that I loved to do. So I tried it and loved the classes, and here I am now!”

Miedema, a 16-year teacher and North Dakota United member, was named a co-recipient of the 2017 Teacher of the Year award this summer by the North Dakota Council of Teachers of English. Heather Woods of Wahpeton High School was the other winner this year.

The award came as a complete surprise to Miedema. “My friends lied to me and told me that one of my other friends and colleagues was getting this award,” she said. “It turned out to be months of deceit, actually, so when it happened I was completely shell-shocked. I don’t know if I actually said words that meant anything, but it is so unexpected, yet so, so meaningful.”

“Meaning” is a word Miedema takes to heart as she works to reach the kids she teaches. She strives to deliver value to students in her lessons and aspires to help them learn and appreciate something new each day. She wants them to grow as people so they are active citizens in the communities they live in as adults.

Missy teaches freshmen and seniors (she calls them the bookends), which gives her the unique perspective of seeing potential and growth.

“And then they come back after they’ve gone to away to college, and they’re like, ‘Oh, this thing! I get it now. I see why you did this!’ Or ‘I see why we were studying this or reading this.’ Or ‘This thing I thought I didn’t like in high school is this thing I love now!’”

The lightbulb moment is another draw to the profession. She said one of the things that makes her most happy is the unexpected moment when a student connects with a book.

“One of the things on a daily basis is kids will come in and say, ‘I don’t like reading, I hate reading,’ and a couple of months, or weeks or even days sometimes into it kids will say, ‘I can’t put this book down!’ Or ‘I stayed up late reading!’ And that’s a super little thing, but to an English teacher that makes my heart flutter.”

The community of Grand Forks holds special meaning for Miedema. It’s where she grew up, and as a 1997 graduate of Red River High School, her senior year was interrupted by historic flooding. She’s since gone on to teach at both Red River and Central, and says where some people see a rivalry, she sees what each school brings to Grand Forks.

The other common denominator is the very thing that keeps Miedema coming back year after year: her students.

North Dakota United is another common thread in Miedema’s life and teaching. Her mother, Janet DeVillers, taught at Central Valley Public School in Buxton for 36 years and was the local president. Joining North Dakota United was non-negotiable.

“I’m one of four kids, and my parents were not wealthy by any means,” she said. “That probably could have been one of those things she didn’t write out a check for, but it meant a lot to her and she knew that she was safe and protected. And she knew that there were people that were advocates for her, and so that message was very clear in my house early on.”

Meidema says she saw the things her mother’s local did to promote education and sees the same effort by the Grand Forks Education Association to reach into the community.

“Our local does a great job of doing events — reading events for kids — or just ways to get the community to look at education more positively, and so that has value to me.”