DSU Bismarck Students Give Gift of Reading to Community 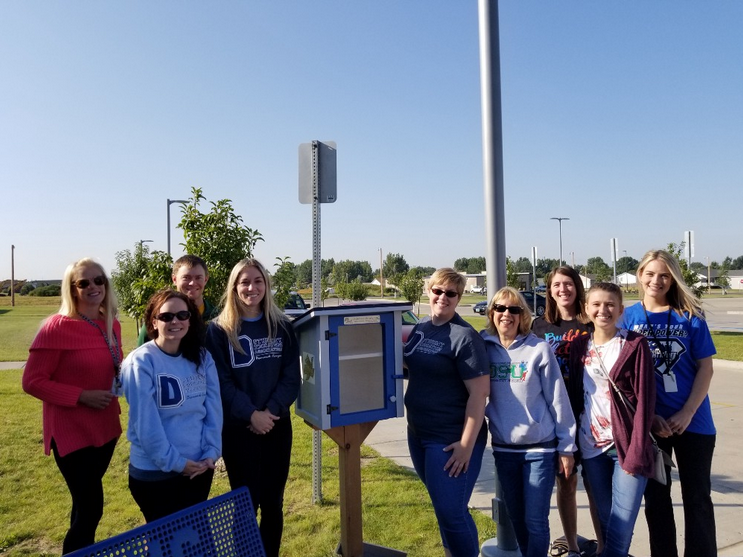 DSU Bismarck Students Give Gift of Reading to Community

For centuries, the definition of what a library is didn’t change much. It was the building in which communities housed their resources of information and knowledge, i.e. books. As time has gone on, other materials have come and gone, including periodicals, magazines, newspapers, manuscripts, CDs, DVDs, films, microfilm, cassette tapes, video tapes, Blu-ray discs, e-books, databases, etc.

But a library is known for its books; always has been, and (hopefully) always will be.

Like other resources, libraries have been made smaller and more portable. Beginning in 2009, the nonprofit organization, Little Free Library, has registered more than 50,000 Little Free Libraries, in all 50 states and in 70 countries, worldwide.

The concept is simple: “Stewards” purchase a library box from www.littlefreelibrary.org, or build their own, and register it online. They set up their library box out in the community, and stock it with books. Anyone can take books from the box, or give books they no longer want back into the box.

The members of the Student-North Dakota United (SNDU) chapter at the Bismarck campus of Dickinson State University were looking for a way to help serve their community, and to promote an appreciation for literacy. Little Free Libraries was the perfect idea for them.

“We had the idea of getting one of them to test it out,” said Kayla Helbling, their outgoing president. “We tried contacting schools to see which school would be most interested, and the one that really expressed an interest was Lincoln Elementary. And from what we’ve seen on the map, they didn’t have one out there, so it’s a pretty decent place to have it. The entire community can use it.”

Helbling said that they were able to put together their Little Free Library for a relatively low cost of $550, including paint, supplies and shipping costs for the Library box. “It’s a light gray color, and then we just have a pop of blue because Lincoln’s colors are pretty much the same as DSU’s colors,” she said. “And then I had my Uncle Tim at Corral Sales print me off some stickers of the Lincoln logo and the DSU Bismarck SEA logo to put on the sides.”

They raised funds for this project by hosting an event at Station West Bar & Grill this past summer. “We got $1,400 from that,” Helbling said, “and we used part of the money for teacher appreciation gifts.” She said they are planning to have another Station West fundraiser on Feb. 17, to raise funds to purchase school supplies for students. “We had a really good turnout (last time),” Helbling said. “There was a girls hockey tournament in Mandan that day, so there was like a whole bunch of people who went there.”

Their chapter installed its Little Free Library with a public event at Lincoln Elementary School on Saturday, Sept. 9. This event is part of their chapter’s efforts to increase participation by members.