Dedication to the Arts 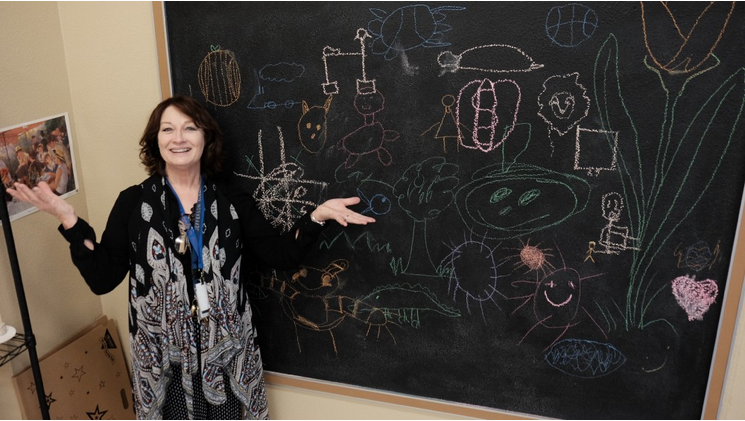 Home ＞ Article ＞ Dedication to the Arts
Posted in

Dedication to the Arts

Art, like any discipline, requires practice. Lots and lots of practice.

Art teacher and North Dakota United member Marlene Biondo knows this lesson well. She has been plying her craft for many years, across the country and throughout the world, working as an artist and as a teacher.

“I’ve taught for about 25 years,” Biondo said. “I taught 12 years in a high school in Minnesota. And I’ve taught here in Dickinson for four years. I’ve also taught in South Carolina and in Utah and in Montana. With that experience, this has been the first time that I’ve taught for elementary schools. I’ve taught all ages — pre-K, elementary, junior high, high school and university level. I’ve also taught at Dickinson State University, but that was like 20 years ago. I had just come from Utah, and I was showing my artwork in a gallery, and some of the local professors saw my work, and they said, we’d like you to come work as an adjunct professor at DSU and teach art fundamentals. So I did that for two years, and I was very flattered by that because they saw the quality in my artwork, as a professional artist myself.”

Currently, she teaches art classes for three of the elementary schools in the Dickinson school district. Because she splits her time between 27 classes in grades two through five at the three schools, she doesn’t get a lot of time to spend in front of any one class.

“Each class has about 15 hours, at best, of art throughout the year,” Biondo said. “That’s not very much. For second grade, it’s only 30 minutes per class. I’m scheduled for 27 classes per year. In grade two, that’s split in half, as far as time goes. So it’s not 27 hours; it’s 27 half-hours. For third-, fourth-, and fifth-graders, it’s 40 minutes. As a result, I feel like students really love art, they love what we do in class. But they always want more.”

Biondo has had to become creative in her approach to teaching, in order to give students more time with the arts. She has started a Home Art project for her students, which encourages them to work on artwork at home, with their parents, and to bring those assignments back to school for her to see. “Part of the Home Art comes from a class that I’m taking online from Drake University,” she said. “What I am presenting, but am working on, really has magnified what I do in the classroom. One of those was teaching in the inclusive classroom. Another was home-to-school partnerships. This is part of that. What we try to do is get parents involved in the educational process, and the student to connect with the parent about something that is happening in school.”

Biondo is a proponent of utilizing technology to maximize the time she has with her students, and to increase their curiosity and enthusiasm for art. “When I think about the 21st Century school, we’re really going to have to use the Internet as another learning tool,” she said. “I see art as very, very important. Yet the limited time we have in curriculum, in our schedules, for art doesn’t indicate that yet. I see that changing in the future. I see some schools that are going to be 21st Century schools that are really on the edge of technology, will see that need and then promote the arts a lot more. I hope.”

Biondo has made exceptional use of one technological resource, the Smart Board, as a way of projecting her love for art onto her students. “You see my Smart Board, I’ve already got that up. And we are actually going to make a stencil that we put on black paper, and then we’re going to splatter paint on it like Jackson Pollack. This facilitates a really easy transition from image idea, rather than just holding up a poster. I love the Smart Board.”

She also uses the Smart Board as part of her art-assistant program. “My art assistant sits in front of the class, and they sometimes draw right over here on the Smart Board,” she said. “As they’re working, if they have a problem or question where they don’t understand something, I can correct it right here. The kids love this! At the beginning of last year, it was just a buzz around the lunchroom. I was telling the principal about it at a different school, and she said, ‘Oh, I know already all about your assistant program. I hear the kids telling me about it at lunch time, and they’re really excited.’”

One of Biondo’s standout students is Rainey Zettel, who has won multiple awards from the Badlands Art Association, including Best All-Around Artist, People’s Choice and the Austin Cole Rosler Memorial Award. She was one of the first students to participate in Biondo’s Home Art project, which came easy to her because she likes to draw in her free time.

“Art is just fun,” Zettel said. “If I’m bored, I’ll find something to draw. My hardest part about drawing is figuring out what to draw. It’s so hard to think of something, but once I think of something, I start drawing. I asked my friend, ‘What should I draw?’ She said a rainbow, so I did, but then I drew this elephant-zebra-unicorn-pegasus thing on it. And I think it was part dog, too.”

Another one of Biondo’s students in Dickinson also won the 2017 Overall Winner in the North Dakota Game and Fish Department’s Earth Day Patch Contest. Ryan Schumacher, whose dad works as a custodian at Prairie Rose Elementary School, entered the contest with Biondo’s encouragement, and ultimately took the top prize.

“Our students did such a phenomenal job on this Earth Day patch, and I presented it like a graphic design opportunity for them to compete,” Biondo said. “And I set a goal, and I told the kids about my goal. I said, ‘I have a goal; I would like to have at least one winner in the winner’s circle.’ And you know what? Ryan took that goal, and he implanted it. He worked in the classroom, he worked outside the classroom. He wasn’t satisfied until he had his very best work.”

Biondo wants her students to grow up, knowing that art is in everything we do in life. “They can develop skills now that they can use in the future. Doesn’t matter if they’re not going to be, let’s say, an artist or a teacher or a career professional in graphic design. Even if they’re in the business world, and have to create a brochure for advertising. Giving the students the basics, the foundation, to be able to do whatever they want to with the arts.”

And the best reward she receives for her dedication to the arts is the thanks and appreciation of her students. She points to a note she recently received, and reads it aloud. “Mrs. Biondo, thank you for being an awesome art teacher. From Trevyn. I love this!”