DEA team was willing to meet in the middle. 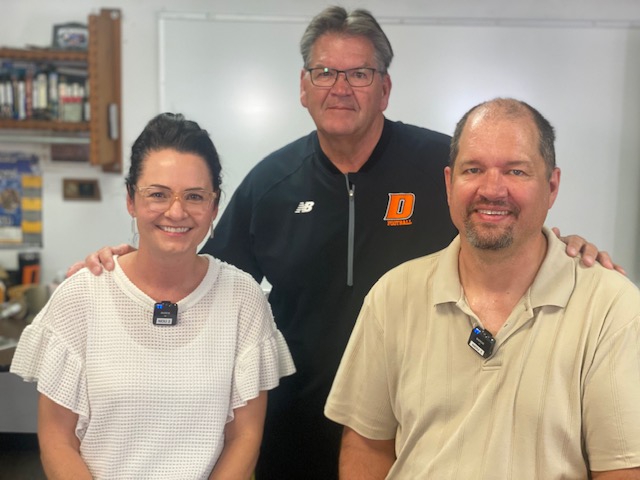 The Dickinson Education Association ratified its contract in mid-June, but not without a lot of frustration and effort. Due to a budget shortfall, the school board put a heavy ask on the shoulders of DEA negotiators—requesting they find money to increase teacher pay. The DEA team delivered, calling for a shared solution between educators and administrators. But that compromise was rejected. That’s when frustrations reached a tipping point.

Cara Heiser, Karl Legatte and Dave Michaelson have around 100 years of combined teaching experience. Cara and Karl are negotiators for the Dickinson Education Association and Dave has served in that role. As veteran teachers they’ve been through a lot, but nothing like this year.

Dickinson Public Schools are operating in a $1.3 million dollar deficit. During negotiations, the school board asked the DEA team to find solutions IF teachers were to get raises for the upcoming contract. The DEA team delivered a shared solution — only to have it rejected. “We did come up with a way that we could do this and the burden would be shared by everybody, not just teachers, but by teachers and admin and everybody across the board,” negotiator Karl Leggate said. “And that got shot down by the administration, by the administrators. And that was a very frustrating thing. We found a way that we could try and work together as all one unit, as DPS, and that didn’t fly.”

The DEA team continued fighting for its members, eventually reaching an agreement, but not without an unexpected final word from the school board. “And I felt like we were maybe making some progress until the final meeting when our school board accepted the offer or the counteroffer on part of the deal,” negotiator Cara Heiser said. “It would have been fine and done just to have said, we accept this is it. Let’s move on. But their final statement said something in regards to because we are accepting the counteroffer, you know, and everybody needs to know that we’re going to be starting the year out at a bigger deficit. Also, paraprofessional jobs will not be filled and some certified staff.”

Those parting words from the school board left an impression on Karl and Cara. “And if you have a school board that is in the position where ours is, where they are deficit spending, then you look at potentially having no pay increase while your health insurance continues to go up,” Heiser said. “So a teacher could technically take home less in their pocket from year to year if they’re not compensated, if there is not a pay raise involved. I think our community doesn’t necessarily know what the board has gotten themselves into in terms of their deficit. I don’t think the public knows how they’ve spent their money.”

One place money is spent is administrative pay. Average administrator compensation in Dickinson Public Schools is the highest of all the large schools in the state at over $186,000. The gap between administrators and teachers’ average compensation is also the widest in the state — a $93,000 difference. “We recognize that the DPS is in a tight spot and we’re willing to help with that. But I think the key is we’re willing to help. We don’t want to be the sole carrier of the solution,” Leggate said. “If everyone is being asked to do what we’re being asked to do, then we’re more than happy to do that. That’s not a question. And, you know, the people say it always comes down to money, but it’s – the money’s nice, but no teacher gets into it for the money. It’s about being appreciated and about being respected for what you’re doing, for the school, for the kids and for the community.”

Michaelson is retiring after 40 years as a teacher and coach in Dickinson Public Schools says this years negotiations reminds him how important it is to belong to your local association. “I’ve believed that for forty years and I think that’s first and foremost,” said forty year Dickinson Education Association member Dave Michaelson. “They’re the people who are going to go to bat for you….because through all of this I have found more comfort and peace of mind of all three levels, the DEA, NDU, and NEA I have found a great deal of comfort, peace of mind knowing they were there for me, they had my back in a couple of situations … and every time we’d go to the negotiation table those are the people trying to get the best for the masses, all of the teachers not just one or two.”