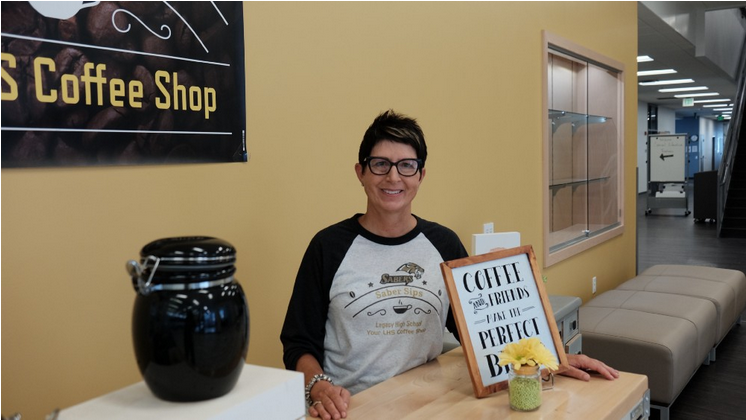 Most people know, if you’re looking for a boost during your daily life, coffee is always a great option.

And so it’s probably not a surprise that special education teachers in North Dakota, who are looking for a way to boost life skill knowledge for their students, are turning to coffee.

More specifically, to selling coffee to students and teachers, in schools in Bismarck and Minot.

At Legacy High School in Bismarck, North Dakota United member Pam Aadnes works in special education. And she had been talking with her colleagues for the first few months of school during the 2016–17 year about the concept of project-based learning for her students, by letting them run a coffee shop in their school.

“We talked a lot about it in November, December,” Aadnes said. “We talked and we planned, and OK, we just have to do it. It’s improved every week, as far as efficiency and customer service. You just had to start …”

At the start of the project, Aadnes had to pull together resources, from the school and the community, in order to get her “Saber Sips” shop up and running.

“I got a $50 grant at Sam’s Club, starting off,” she said, “and we borrowed some money from the Bank of Pam, and we kind of grew from there. Our administration has been really supportive, and they think this is awesome because it’s project-based learning and all those things that go with Legacy High School. We had mod schedules, so we have bigger blocks of times sometimes when kids don’t have class, so it’s worked well with that, too.

To really get things percolating, though, she needed to find a cart that would work. “The janitor kept coming out and saying, ‘Pam, that cart you’ve got is not that strong,’” she said.

“I’ve been a member of the Council of Exceptional Children for many, many years, and they have a professional grant for $300. I applied for that, and we bought a more sturdy cart that’s a little more permanent.”

Since opening in January, they were able to build up the expectations for this project, and their business’s productivity level. “When we started, we thought, if we can do 50 or 75 cups, that would be awesome,” Aadnes said. “We figured out what it would cost per cup and what we would need, and what we thought we should get for profit. We kind of talked about that before we opened. And I would say, the last Friday, we were selling 275 cups.

I mean, it’s busy. And even some of that business is interesting, because the kids get a little rattled and shook up. So there’s a lot of teaching that goes on then, too. Take a deep breath. Take your time. Just do a good job. We’ve got this! It’s those kinds of things.”

In Minot, at Jim Hill Middle School, a trio of educators — NDU members Ashley Grina and Kristi Reinke, along with speech pathologist Stephanie Neether — are on the verge of launching their own coffee shop, too. It started with an idea from Minot Education Association President Reinke, when she was a special education teacher early in her career.

“When I first started, my first year of teaching was in special ed,” Reinke said. “And we’d send them out to other classes, and they’d go to math and science and social studies. They’re all important; I get that. But I always thought, what was the most important when they came back in was real life. My eighth graders, they were on the verge of filling out applications at grocery stores and the Dairy Queen, and I’m thinking, that’s like the skills that we need to be teaching them. … By the time I finally got comfortable enough to start implementing that stuff, then I changed into general ed and it just kind of went on the way side. Now with Ashley here, and watching her with the kids and watching the kids going out into the classes and doing stuff, I thought, hmm. What do you think of this, Ashley? And, of course, Steph is the department chair. So the three of us have been, all this summer, like, we have to get this going!”

“Together, us three have kind of been brainstorming, what do we do, how do we start this?” Grina said. “We’re going to start out slow, and start serving coffee or different drinks, starting Fridays. And then maybe we’ll work to two days a week, and slowly build up to almost every day of the week. We have a time in the morning. And that’s when, it’s about a 25-minute block, and that’s when we’ll do this. The children will take the orders from teachers.

They, too, have had to rely on donations from their school and community to get their shop started. “We’ve had quite a few items donated to us, which is really great,” Grina said. “And it’s a great way to just get started and get going on this. … This works on the job skills, those life skills, the social skills, being able to talk to teachers that they don’t typically interact with. There’s so many different skills that you can work on that will be lifelong for these children.”

“Plus building relationships with other peers and teachers,” Neether added. “I think they’ll be really excited about it, too. They like getting out of the classroom and seeing other people. I think they’ll feel really proud of themselves, delivering coffee and fulfilling those orders.”

Mystic Coffee launched at the beginning of the 2017–18 school year, and that’s when the students will first hear about this project, and be given the keys to make it their own.

“We’re excited for this,” Grina said. “This is going to be something new, so that’s why we’re going to start off very slow. We plan on having a barista from Starbucks come in to talk to the kids and do different things. We will be putting together different visuals, half sequences for the kids, to see step-by-step, how to use a Kuerig, how to mix coffees and different drinks. So we’ll have visuals, we’ll have everything there for them.”

And soon, they will have a coffee shop operating in the heart of their school that will become part of the culture of Jim Hill Middle School, the same way that Saber Sips has become at Legacy High School.

“This kind of just took off,” Aadnes said. “The school and students really like it, they enjoy it. Teachers say, ‘I can’t wait for Fridays!’ The sophomores coming in did a tour, and they were in small groups, going around the building. And I was very proud when the student guides were saying, ‘And this is our Saber Sip coffee shop. They have awesome coffee! So every Friday, we get to have coffee here.’

“I just thought that was such a big compliment. It wasn’t like, oh, special ed kids do this. It was, this is part of our school. For me, that’s awesome.”