BSC professor followed the path of science His journey has led him from Kenya to Bismarck... 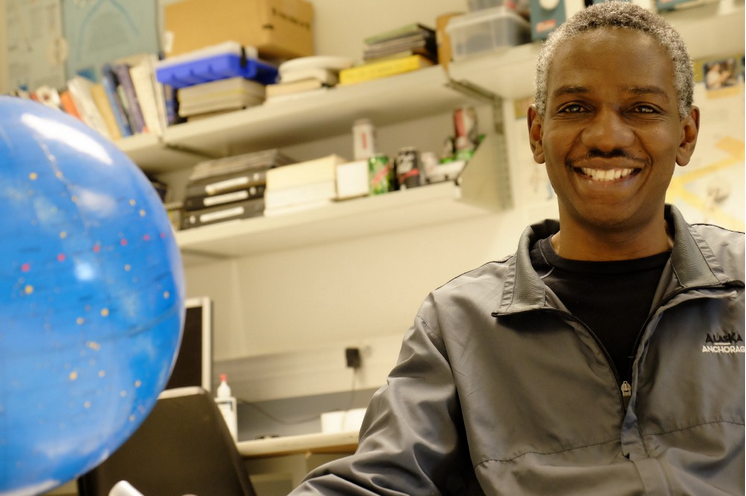 His journey has led him from Kenya to Bismarck

For Tony Musumba, assistant professor of physics at Bismarck State College, the classroom feels a lot like home.

“My parents were teachers,” Musumba said. “My dad just fell into the profession after he had done a couple of managerial jobs, so he was a high school teacher. My mom was more the inspiration for teaching. She started off teaching grade school, and she was a good teacher for a long while. She actually taught me, too, in grade four. There was a time when she wasn’t feeling well that I substituted for her class, when I was in high school.”

Musumba grew up in Kenya at a time when the country’s education system was being reformed. “Our president in Kenya thought, well, the American system looks pretty good, so let’s go the American way,” Musumba said. “We used to have seven years in grade school, four years in secondary school, and then you go to two years in high school. We changed that to eight years in grade school and four years in high school, and then you go to university.”

Students were tested at each level, and you had to pass the exams to move on to the next tier of education. “They just keep sieving people,” Musumba said. “You get a couple people who can’t make it, and sometimes, that’s it for them. And then you go to high school. If you can’t make it beyond high school to the university, maybe you’ll get some other colleges, but it’s just a sieving process.”

“You already have some knowledge. You just need to fine-tune that knowledge to interrogate parts of the universe, and understand how the universe works. It’s a journey, because they have all this stuff they’ve heard about how physics is tough, or they say, I can’t do this stuff. And you’re constantly encouraging them, to say, you can do this stuff. It’s not hard. It’s just a different way of looking at things.”

He said he found his passion for education in helping a fellow student pass his exams. “There was a guy who was studying for his grade-school exams to go to high school, and I remember helping him to study,” Musumba said. “I was really glad when he made it and moved on to high school. I guess that started way back then, tutoring and helping people to succeed. It was a fulfilling thing for me.”

Musumba would receive his Bachelor of Science and Master’s degrees in physics from Moi University, in Eldoret, Kenya.

Though he admits a preference for the humanities, he was driven to pursue physics because it challenged him. “I had to choose which way to go, and I ended up doing physics, biology, chemistry and math,” he said. “So I whittled things down based on what I liked. I liked biology more than physics, but somehow physics seemed to be more challenging. And I didn’t have to deal with chemicals!”

After finishing graduate school in Kenya, and teaching high school for a short time, he made the decision to move to the United States to pursue his Ph.D., at the University of Texas in Dallas.

And in 2008, he moved to Bismarck, where his wife, Alice, had accepted a job at the North Dakota Department of Health.

“We had a softer landing than most people because we knew a couple of people here,” he said. “We lived in someone’s basement for almost a year before we moved into our house, here. But it was the right move, because you can’t just stay in Dallas and you don’t have a job. My stipend was almost done by August, and we had a young baby. It was a lot going on. I was still finishing up writing my dissertation, but this was the right place to be. It was cold, and good for me to study and write up. In fact, I used to come in here to the BSC library, and write.”

He also put out feelers at BSC in the physics department, about whether there might be a job opening soon. “I had come in and checked if there were any opportunities for physics, and I talked to the physics professor, but he said there was maybe a possibility but there wasn’t anything definitive,” Musumba said. “I was just about to go defend my dissertation when I saw this assistant professor of physics job opening at BSC. So I said, wow, I’ve got to apply for this! I basically applied for it, went to Dallas, did my defense and came back for the interview.”

This school year is Musumba’s ninth at Bismarck State College. He keeps a full course load, typically teaching three courses each semester, plus labs. His goal in teaching, he said, is to show his students that physics isn’t nearly as difficult as they may think it is.

“You already have some knowledge,” he tells his students. “You just need to fine-tune that knowledge to interrogate parts of the universe, and understand how the universe works. It’s a journey, because they have all this stuff they’ve heard about how physics is tough, or they say, I can’t do this stuff. And you’re constantly encouraging them, to say, you can do this stuff. It’s not hard. It’s just a different way of looking at things.”

He stays active in the communities that surround him: in physics, at BSC and in the city and state he lives in. He participates in the North Dakota Space Grant Program, and is the North Dakota section representative for the American Association of Physics Teachers. He also works with the BSC STEM club with a project in which they launch high-altitude balloon up to altitudes as high as 20 miles above the surface of the earth.

“We will launch these balloons, and we can predict where it’s going to land,” Musumba said. “So we’re going to go out there, to a small town and go recover that balloon. One of the things we like to do is, once we’ve recovered that balloon, let’s go to one of the restaurants right there and have some food. I still like to learn about the history and go to places that I haven’t gone to.”

In the scientific process, Musumba teaches physics by encouraging the study of how objects behave within our physical world. And so he likes to study the history of the institutions in which he works and lives, to better understand the processes by which he and his colleagues and neighbors behave.

“I like the history of the institution,” he said. “And I am one of those guys who looks into that, and finds out, how did this come about? Who taught physics before me? Who taught physics even before that person? You’re trying to see why things become what they are. Did we deal with this stuff before? Well, we dealt with it that way, but maybe this time around we should go this way?”

His respect for process, his profession and his place within the institutions that surround him, is what compelled him to join North Dakota United. “I think what triggered me to join was basically just feeling like these are guys that have my back,” he said.

“You have to be active in sometimes fighting for change. The way things are going in the U.S., you can’t just sit back and let things disappear. I don’t think there’s anybody else who’s going to be fighting for our kids and our neighbors and our friends … and that’s what NDU stands for. We want our students to have good careers. We want them to live in places where they are not fearful, and they are safe. And that’s what America has been: a welcoming community that helps people flourish.”