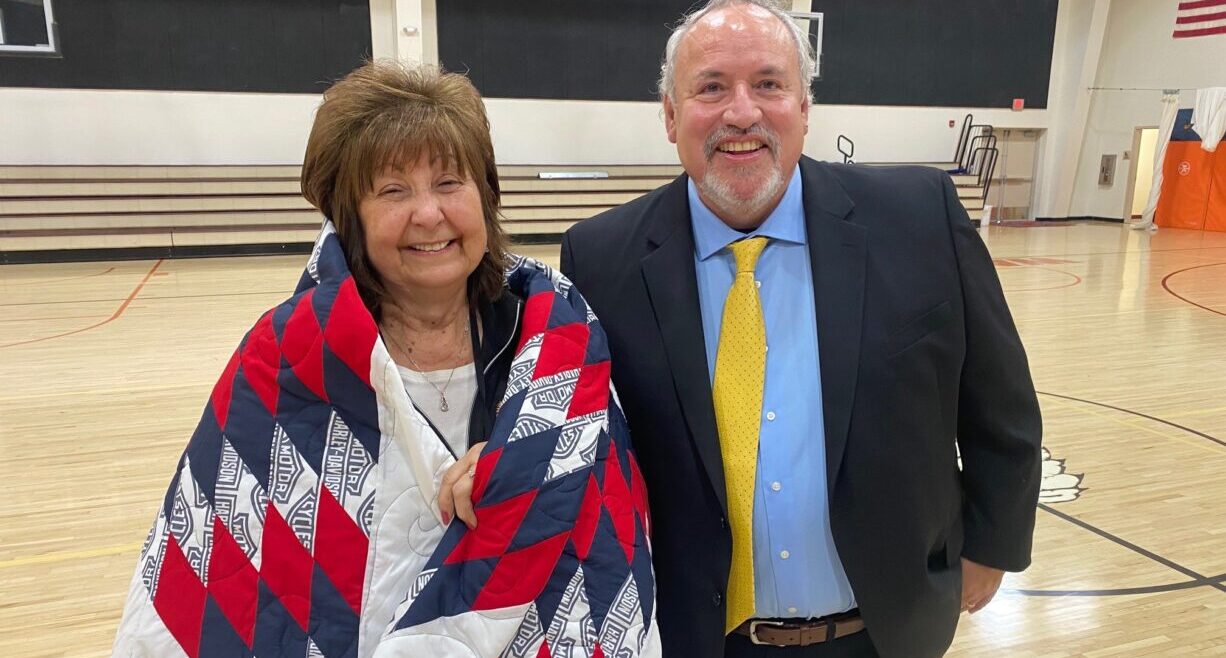 For the past 50 years, Deb Bertsch has been a comfort blanket for hundreds — probably thousands — of students at Warwick Public School. Her current job title is classroom paraprofessional, but like so many education support professionals (ESPs) in our state, she’s worn many hats in her decades of service.

“I was at one point the office person that was never in the office,” Bertsch said, “and I kept going through the typewriters back in the day. And they said, ‘We’ve got to get you a heavy-duty one, Deb!’ I’d work closely with the superintendent and the principals to get subs. But whatever, wherever, whenever, (I’ll do it) because we are a system. It is not one person that runs everything; you’ve all got to work together and make it happen.”

It was fitting, then, when Bertsch showed up at the school gymnasium on Nov. 19, 2021, to a surprise ceremony where she was awarded the 2022 North Dakota United ESP of the Year trophy and an honor quilt, just as warm, soft and comforting as she has always been.

“My superintendent, they knew at one point they were going to do it,” Bertsch said. “So, she had seen that quilt and she said, ‘No, that’s good. That’s Deb’s quilt.’ They presented me that one that day, and it’s beautiful.”

A month later, Deb was presented another honor quilt at a Warwick High School boys’ basketball game by the Spirit Lake Tribe and an honorary Native American name, C’ante Wast’e Win, which means “good-hearted woman.” “They just called me a couple of days ahead of time and said, because of everything that you have done throughout the years, we would just like to present you with your Native name,” she said. “And they said the proper way to do that is to invite you to a special time where we would do it and we would like to do it at the ball game … I said, that is such an honor.”

The best advice she had for all of the ESPs and educators across our state was to stay positive. “I just always try and keep the positive attitude and stuff because there’s been times when you just stop and you regroup and you stay positive and strong,” she said. “And you know that you’re there for the students, that some of these other things that are going on isn’t what it’s about. It’s the love for the students and the love that they give you back and the respect.

“Stay strong, stay positive. Realize the main reason you’re there is for the students. And just keep smiling.”