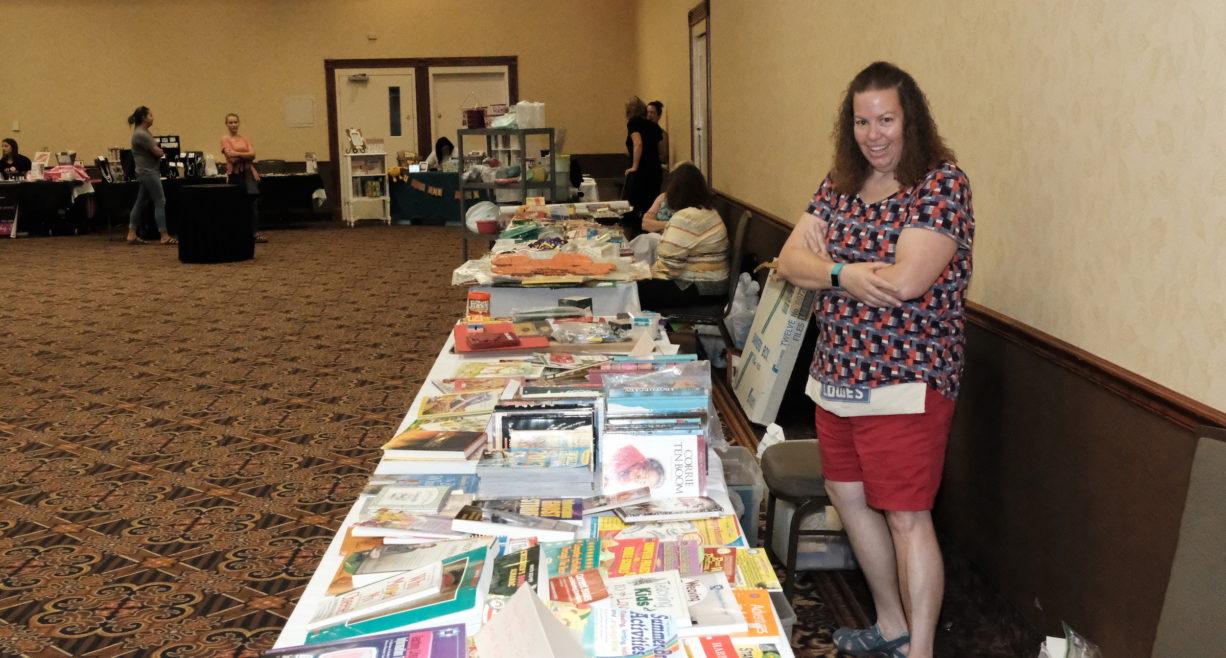 A new school year means that hundreds of educators, new to their profession, bring with them a need for support and guidance. In school districts across the state, faculty and staff for K-12 schools and universities are hosting orientations for new hires. And the members of North Dakota United and our local associations are there, ready to help.

In Bismarck, the Bismarck Education Association hosted its first-ever Teacher Supply Swap & Trade Show at the Ramkota Conference Center on Thursday, Aug. 10. Teachers were able to reserve a table to sell supplies and materials they no longer need, alongside vendors selling goods that would be useful for educators.

The idea first came from BEA public relations (PR) chair Kari Nehls, an elementary teacher at Highland Acres School in Bismarck. “There is a Sioux Falls-area teacher supply swap that happens in South Dakota that I know a lot of my friends have been excited about,” Nehls said. “And so, that’s where I got the idea.”

She had experience participating in vendor fairs previously and led BEA’s efforts in putting together the event. Additionally, BEA received a $500 PR grant from North Dakota United, which helped pay the costs of promoting the Supply Swap.

“We decided to time ours around the new teacher orientation training in our district, and that was helpful,” Nehls said. “I know some of the new teachers were able to step over afterwards. We extended the invitation to them there. So it served as a double purpose to get some materials into new teachers’ hands as well as help the retiring teachers or current teachers get rid of some their extra things. And then also it’s been an opportunity for networking of veteran teachers meeting new teachers.”

For new BEA President Lori Furaus, an AVID instructor at Simle Middle School in Bismarck, the Supply Swap & Trade Show was a great opportunity to introduce BEA to teachers first coming into the school district. “I think the fact that a lot of the teachers that are coming from a week of orientation, they’re excited to start in a new classroom, and they’re really looking for ways to build up their inventory in a cost-effective way,” Furaus said. “Events like this are very important, not just on the level of being a teacher, but the fact that it’s sponsored by BEA. I think that it really helps support them right from the get-go. They’re coming in, they’re learning about our organization, and they’re also able to find things to help them be better teachers in their classroom.”

To encourage attendance, BEA used their Facebook page, e-mail blasts and promotional ideas. “We gave away some early-access passes so people could come in and shop half an hour early if they shared or commented (on Facebook),” Nehls said. Attendees were also able to throw their name into a drawing for door prizes.

At the end of the event, BEA felt it was a successful start to what they hope to do annually. “The need’s there, definitely, for a new teacher to gather materials,” Nehls said. Since teachers are routinely paying for their own classroom supplies, it pays to find the best deals.

“When it’s coming out of your own pocket, finding a good deal is always good,” Nehls said. “Teachers like good deals, and supporting other teachers, too. So we were hoping that this could be an event that will take off, and make it a little easier for both sides to just sell all your stuff and have the customers come to you, instead of having to meet up with people individually and make those purchases.”