Bismarck instructor helps build a big idea for providing food to the needy By Tom... 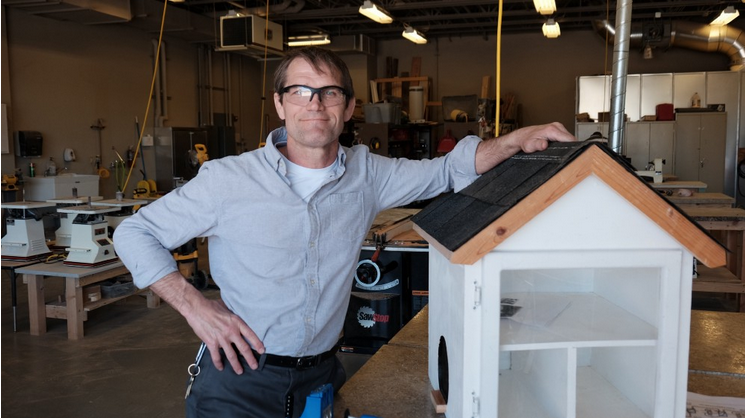 This spring Schumacher and his students are hard at work, here, on a community project called Little Free Pantries. The pantries look a lot like the Little Free Libraries you may have seen around town the past few years. In this case, Schumacher’s students are building six pantries to spread throughout Bismarck to provide food for those in need.

It’s an idea that Schumacher has embraced since he was first asked.

“It’s our community of Bismarck, reaching out to low-income families and giving them something that — if they don’t have money in their pockets — we’ve got some food for you still,” Schumacher said.

Former Jeannette Myhre teacher Kim Dockter came up with the idea years ago but followed through after a conversation with a former student recently released from prison.

“I had been working with her through the process of transition, and she called and said, ‘Kim, I’m hungry. And I’ve never been hungry in my life; I’ve always had food.’ I asked her about the local food shelves, and she said she didn’t have a car to take public transportation. That’s when I pulled the idea back off the shelf,” Dockter said.

Dockter said her connection to the public-school system as a former teacher, and the support of longtime NDU member and Jeannette Myhre social worker, Chris Hall, led her to move forward with the project and ask students at the Career Academy to construct the pantries.

“We needed some boxes built and I thought, when I worked there, I had always really valued connecting the kids to the community. And so I thought maybe we could both take advantage of this and learn something and get this kicked off for our community,” Dockter said.

Schumacher and his students began researching designs in April. He said it was a great fit because his students learned real-world skills while working for a greater cause.

“They use many different types of machines and tools to put it together. And, you know, we talk about the different types of materials that we have to deal with and what we’re using there, air guns and using air-nailers and gluing everything together, and putting on shingles, and we actually show them this is how shingles are put on. Many of these kids haven’t done that before,” Schumacher said.

Schumacher says the Little Free Pantries are a point of pride for him. He says, as a Pre-Engineering Instructor, his department always looks at what it can do for the community. Plus, he says it’s rewarding to see kids complete a project from design to installation.

“You know, five years from now they may look back at it and say, hey, that is the pantry box and we built it, and it does mean something. It is something I’m a part of, and I was able to grow within the community as an individual. Five years later, they’re an older person saying that was an important thing that we actually did for the community,” Schumacher said.

Schumacher has been a teacher for over 20 years and says he’s been a proud NDU member his whole career. He says he thinks it’s important in whatever he does, from teaching to officiating, to be a part of the group.

Dockter is looking for places to host the pantries and says she’s open to churches, businesses or organizations who can help out.

For more information about the Little Free Pantries project, you can contact Kim Dockter at lfpbismarckmandan@gmail.com.