And the Band Plays On

And the Band Plays On Director of NDSU marching bands to lead Gold Star... 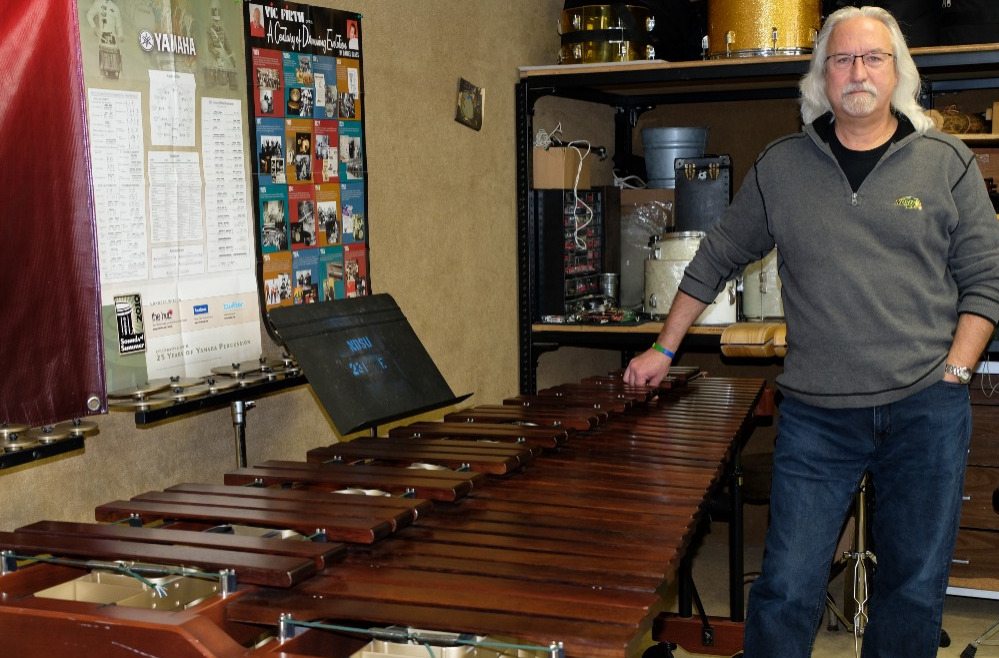 Home ＞ Article ＞ And the Band Plays On
Posted in

And the Band Plays On

The North Dakota State Bison football team has put our state on the map in the past decade. Having won five straight national championships between the years of 2011–15, the Bison are the only football team on the NCAA level to have done so.

To accomplish at such a high level, the Bison need the right kind of soundtrack. Only one band can lead the green and gold out onto the field of battle. That band is the Gold Star Marching Band, also known as “The Pride of North Dakota.” And only one person could lead a band of such stature. He is Dr. Sigurd Johnson, the director of athletic bands for NDSU, professor of percussion and North Dakota United member.

“We’re there to support the team by keeping the crowd in it, and by entertaining the crowd at halftime,” Johnson said. “And so, we keep the energy, and the kids know that. We play when we get a first down and, of course, when we get touchdowns. We play ‘Wipeout’ for all of the students when we kick off to the other team, and you get 5,000 students up there, dancing to ‘Wipeout’ that the band is playing. That’s a really important part of the game-day experience.”

Johnson proudly calls his group a “blue-collar band,” and says that song selection is key to keeping the energy high at any NDSU sporting event. “We do a lot of rock ’n roll songs, and we do a lot of movie selections,” he said. “Right now, the students are working on a show that’s going to have ‘Pirates of the Caribbean,’ ‘Harry Potter’ and stuff like that. As much as I love what we would call classical music, Tchaikovsky, Beethoven and all of that, we don’t do shows like that. We know that the FargoDome crowd on a Saturday, watching a Bison football game, they would rather hear Bon Jovi than Beethoven.”

That appreciation for a wide swath of music started early for Johnson, growing up in Northfield, Minn., in a musically inclined family. “My father was the band director at St. Olaf College for 37 years,” he said. “My mother was a theater-English type of person, and my siblings are both involved in the arts. My sister is a music therapist, and my brother is a creative arts director for a church in the Twin Cities area. So we’ve all gone through that creative process.”

He received his undergraduate degree at Concordia College in Moorhead, Minn., as an English major. “It’s interesting,” he said, “with the English degree, I looked at my undergraduate degree as my last chance, really, to do something and really get into something I really loved. I love to read, and I used to love to write more. I just love literature. So I didn’t look at my undergrad as a real, I’m going to do this job. I looked at it like, I’m going to do all these things and use that opportunity, and then I’m going to be a musician somehow.”

He then received his master’s degree in percussion performance from Northwestern University in Evanston, Ill., and his doctorate in percussion performance from the University of Memphis. He said an important part of his background is his connection to Norway. “I lived there for four years, and I did a lot of teaching and playing,” he said. “I had a band program over there and still have good, strong connections with the Norwegian music community. I’m actually going over to Sweden to teach in February for a week. They have very strong music programs, and I think that’s important part of what I do or what my family does, too.”

He is in his 24th year in higher education, after having spent five years teaching at a historically black college in Mississippi, and then moving to the position of director of bands at Valley City State University in 2000. “I was there for eight years,” he said,

“I really enjoyed my time there. It’s obviously a much smaller program and school, but I really liked it. And my wife, Rooth Varland, got a job here at NDSU right away. She’s in the theater program here, and she’s also a member (of NDU). She’s actually been at NDSU for 18 years. She’s the costume designer and a theater professor.”

In 2007, an opportunity opened up at NDSU, as then-president Joe Chapman wanted to create a higher profile marching band to go along with their athletics program, particularly for football. “He made it possible for this, the marching band or the athletic band side of the job,” Johnson said. “At that time, they had been having an adjunct percussion teacher here. There was never a full-time percussion teacher. They kind of cobbled that job together, and I applied for it and I got that job.”

The members of the marching band are able to receive class credit for their participation. “It’s a regular class,” Johnson said. “We meet three days a week, and we play regular season games. We try to get away for an away game, if we can. This year, there wasn’t anything that worked out for us to go travel with the team.

So we did a couple of fun day trips. We went down and marched at the Minnesota State Fair, which is a blast. And then we also participated in a huge high school marching band competition festival at U.S. Bank Stadium, where the Minnesota Vikings play. And we were an exhibition band for that.”

It’s playoff season for the Bison football team, and Dr. Johnson and the Gold Star Marching Band are prepared to go all the way, in support of their team. “We will, if the team goes to the national championship, our President Dean Bresciani has said the band’s going,” he said. “If we were to go, it would be once again going down to Frisco, Texas. If it happened, it would be number six for us.”

For each of their national championships, Johnson has been fortunate enough to receive the same mementos as the players and coaches get. “I get the championship bling, too,” he said, with a laugh. “I’ve got three rings and a trophy and a watch. It’s really nice that they do that. It’d be cool if they could give to the whole band, but as representative of the band, I get the championship bling, too, and I show that off. I have always accepted on behalf of all the kids who have really put in the work.”

As physical representatives of the hard work he has put into building up the band program at NDSU, Dr. Johnson proudly displays his bling in his campus office. “I mean they’re ridiculous,” he said, “but they’re fun ridiculous.”