At the Heart of Everything

At the Heart of Everything Hazen school secretary enjoys being at the center of activity... 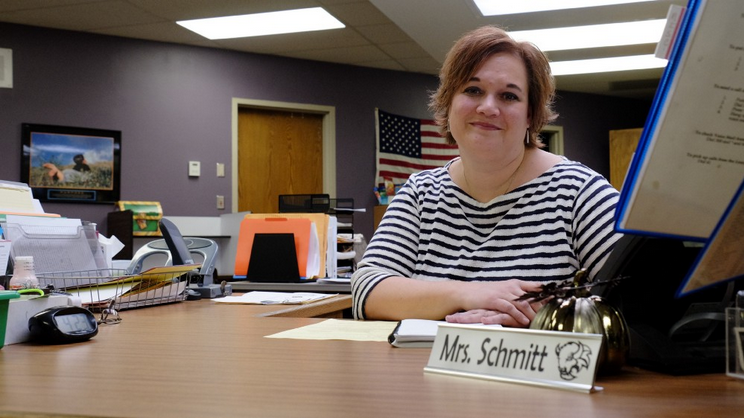 Home ＞ Article ＞ At the Heart of Everything
Posted in

At the Heart of Everything

Hazen school secretary enjoys being at the center of activity

Maybe you’ve heard the following said in your school, or seen a meme with this message on social media: “It’s cute how the principal thinks they’re in charge, when everyone knows the school secretary runs everything.”

At Hazen Elementary School, administrative assistant Marianne Schmitt laughed while she mentioned having seen that meme on Facebook, but admits it’s kind of true. “Everything kind of goes through the office, and if anybody’s having troubles with anything, it comes through the secretary,” Schmitt said. “When the principal is gone, we act as the principal, and when the counselor is gone, we act as counselor. It’s amazing how many different hats we wear in a job like this.”

She grew up in Bottineau, and has a teaching degree in elementary education and special education from Minot State University. She taught special education in Hazen for five years, before leaving to do other things, including medical transcription and serving as director of the ambulance service in Hazen. But she returned to work at the school when the opportunity to work as administrative assistant opened up.

“Someone said to me the other day, ‘You missed your calling,’ Schmitt said. “And I said, ‘No, I didn’t. I have a teaching degree, but this is just where I can utilize that.’ I have that background that I’ve been in the school system as a teacher, and I just really, really enjoy this role because I feel like I can help the students, I can help the teachers, I can understand what’s going on in the classrooms, I can be a really good liaison between parents and staff.”

For Schmitt, there really is no average day working in the school office because things change so much. Her official work day starts at 7:30 a.m., but it will often start unofficially before that, “usually while I’m still in the shower,” she said. “If teachers need a substitute, they call me at home. So I have all my sub lists at home and cell phone numbers and everything.”

Once she’s arrived at school, she gets to work doing several daily tasks, including the morning announcements, tracking attendance, lunch payments and charging out milk for students during their snack break. And when those tasks are done, anything and everything can happen.

“It always seems like once I finish one project, then I move onto the next one,” she said. “At lunchtime, I have kids who come in for medicines again. And then again at 2:00. I do a lot of Band-Aids and ice packs. Lot of those kinds of things. I have a lot of kids who come to sit in the office to do their work. I make the lunch menu, the breakfast menu and the birthday calendar, and do the immunization reports. And run report cards and do the mid-terms. I take a ton of phone calls per day. I’m sure my phone rings 50 times per day, at least. Today, we had programs in the building, so it’s constantly opening the doors and letting people in and out.”

Schmitt does not take any of her responsibilities lightly, especially when it comes to protecting the kids and making them feel safe.

“Probably what’s most scary to me is that it’s my responsibility to check every person who comes through the door,” she said. “I don’t know every single parent, even in this small town. So sometimes when I let someone in through the door, I don’t know who they are. One time, somebody came and they were carrying this bag. It had handles on it and it was about this long,” she said, motioning with her hands, “and I thought, hmmm, no. So I called the principal and told him, you need to go out and find out what’s going on. It turned out he had tent stakes that he was returning to somebody.”

She joined the Hazen Education Association at the beginning of this school year, as part of an organizing drive that reached out to education support professionals, and ultimately succeeded in recruiting 50 percent of ESPs in Hazen to join their local. That recruiting effort started with an event in town.

“We met on a Sunday night at one of the restaurants in town, and they bought us pizza and explained some of the benefits,” Schmitt said. “After that first initial meeting, they had an HEA meeting on a Sunday night. And they always have their HEA meetings first thing in the mornings, but so many of the ESPs can’t do that. I have to be at my desk at 7:30; they have recess duties and those sorts of things. We can’t do that. So they did a Sunday night one. And they really did that in order to include the ESPs, and talked to the ESPs about how this works and who we are.”

Schmitt said she appreciates the efforts to include ESPs in organizing activities, because their jobs are as important as any others in the successes of the school and the students they teach and protect. “The ESPs, like myself, and the aides who also do 50 different jobs, they do make a big difference about how kids behave in the classroom and how all of that goes,” she said. “Kids go up during recess and talk to those playground supervisors about things that are going on in their lives. And they’re able to pass that message along to the staff and to the teachers who need to know. And the kids who come for breakfast in the morning sometimes are kids who just want someone to sit and visit with them.”

Her commitment to the kids is what keeps her coming back to work at the school each day.

“It means a lot to me,” she said. “I can go home at the end of the day, thinking I helped a kid through a tough situation. We have 310 kids at the school, and I probably eat 300 birthday snacks a year. And it’s just really sweet because they bring in a birthday snack, and they bring them to certain teachers outside of their classroom, and when I get one, that’s pretty cool. The relationship with the kids, in the smallest, simplest ways, is just really cool.”