A Walk With Nature 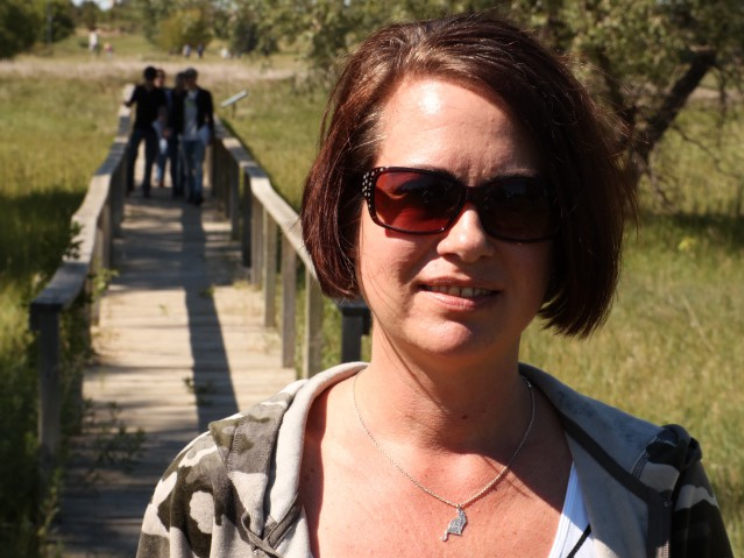 Home ＞ Article ＞ A Walk With Nature
Posted in

A Walk With Nature

Naturalist John Muir once wrote, “In every walk with nature, one receives far more than he seeks.”

Biology teacher and North Dakota United member Andee Woodmansee is hoping that holds true for her summer school students. She’s taken them out of the classroom and into nature. The day we caught up with her, 16 students were navigating the Outdoor Wildlife Learning Site at the North Dakota Game and Fish Department in Bismarck.

“Instead of just being in the classroom and learning about things, now they can take what they’ve learned in the classroom and apply it out in real life. We’ve studied ecology, and so they get to see interactions of organisms in their natural environments,” said Woodmansee.

Woodmansee has been teaching biology for 19 years, most of them at Century High School in Bismarck, and says she’s taken this popular field trip many of those summers. It’s a nice break from the five-hour school day, which runs from 7:30 a.m. through 12:30 p.m. Each day equals a week of class during the regular school year.

“A lot of times we’ll have a speaker out here and they’ll show us furs and animals that are native to North Dakota, and kids can learn about them and see them. Sometimes we have a chance we can fish. There’s a pond and for some kids it’s the first time that they’ve ever fished,” Woodmansee said.

For this class, students walked the trails looking for answers to a variety of questions on their worksheets.

“As they go along there are different markers on the path that describe, for example, how to age a tree. They have to answer questions about that information using things they find all along the trail,” Woodmansee said.

Legacy High School sophomores Katin Vetter and Kaitlyn Mertz are in Woodmansee’s class. Mertz says science is one of her favorite subjects. “Being able to see how things work together and how everything supports each other is cool to me, and how the plants grow and everything that you can’t see — I like seeing how it works,” Mertz said.

Vetter says she hasn’t thought a lot about her future, but that Woodmansee’s class has provided her a lot of insight that could lead her to study biology. “I like living organisms, to see how they work and how they form in cells and stuff, and I wanted to take this class this summer so I could take other classes as well in science,” said Vetter.

Woodmansee has been an NDU member her entire career. In fact, she joined as a student member while attending the University of North Dakota. “There are just so many benefits that come along with it. As a teacher, you have people that are fighting for you, standing up for you. And you never know when something can happen, and you have the association to help support you,” Woodmansee said.

Woodmansee has taken her summer school students on multiple field trips this summer, including one to the Garrison Fish Hatchery, another to Harmon Lake north of Mandan and another to Medora.

She says the trips outside the traditional classroom setting into the real world are impactful for students. Woodmansee also said they had a great discussion following the trip about the information presented by a Game and Fish speaker, and she reported that students got a bonus question right from the presentation, which shows they were paying close attention.

“They are a great class for discussions, and they like to give their input. I have a really good class,” Woodmansee said.