2021 NDU Delegate Assembly in the E-Books 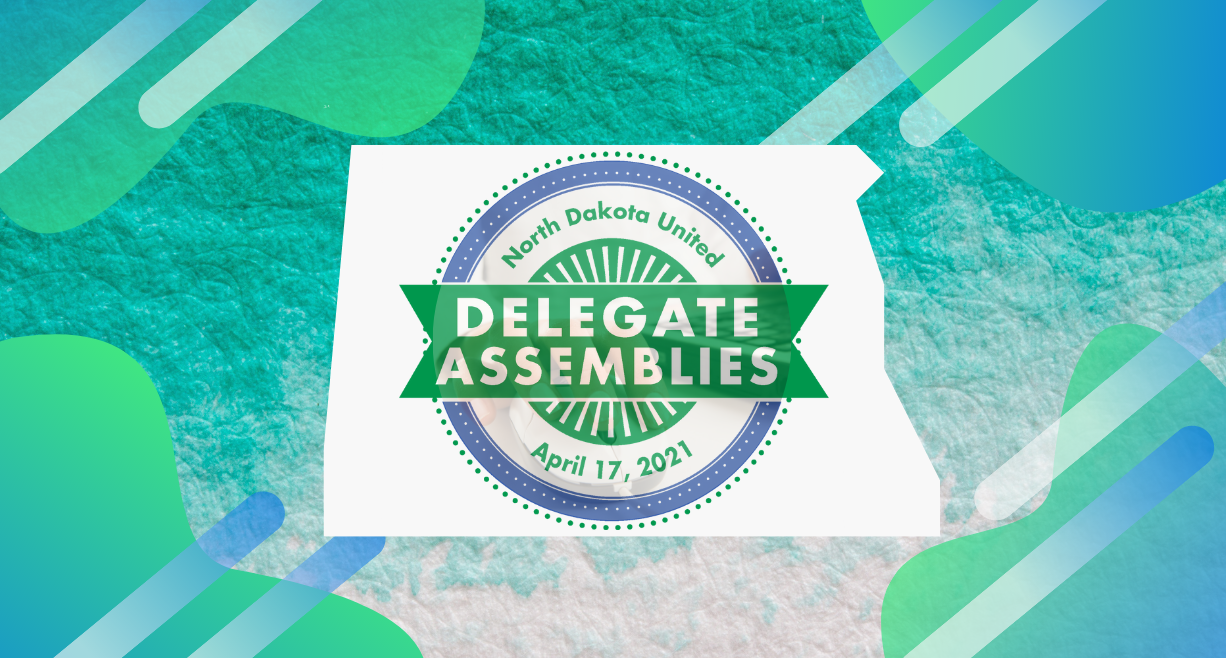 Early on the morning of Saturday, April 17, North Dakota United President Nick Archuleta welcomed delegates, leaders, guest speakers and staff to the 2021 NDU Delegate Assembly. For the second year, our DA was held entirely virtual, due to safety precautions for the COVID-19 pandemic.

“Last year when we met, I welcomed delegates to what I hoped would be our first and last virtual Delegate Assembly,” Archuleta said. “I think that’s a direct quote. Well, here we are again on Zoom, but hope springs eternal.”

In his opening remarks, President Archuleta expressed more of that hope for the future, as NDU has weathered the storm of COVID better than most. “Of the 52 state and federal affiliates (of the National Education Association), North Dakota was one of only eight that is growing its active membership this year.” Member activism also increased, with 2,121 of our members now identified as NDU Member Activists, in addition to 765 community supporters, for a total of 2,883 activists who have contacted legislators 1,079 times during the current legislative session so far.

“You are the public employees that bind our society together, whether you’re an auditor, a counselor, a researcher or a K-12 teacher, an education support professional, higher ed faculty, or someone who plows our roads or keeps us healthy,” Archuleta said. “You are providing the remarkable public services that the citizens of North Dakota have come to realize are essential to the quality of their lives. You, along with the medical community, are the most resilient and flexible sector of the economy.”

This year’s special guest speaker was NEA Secretary-Treasurer Noel Candelaria. As the son of Mexican immigrants, Candaleria is a first-generation American who rose through the ranks of the Texas State Teachers Association to be elected to his current office at NEA this past year. “I can tell you that you will not find a person more passionate about public education, about public service and the promise of the American dream than my friend, Noel Candaleria,” President Archuleta said in introducing him.

“We all sometimes hear about leaders being born,” Candaleria said at the start of his speech. “And I know that real leaders are not born. The ability to help others triumph over adversity is not written into genetic code. Real leaders are made, they’re forged in crisis. And as this Covid-19 pandemic has ravaged the world in nation after nation, city after city, neighborhood after neighborhood and in our union, leaders like you have stepped up in this moment of crisis and acted in the face of great uncertainty, real danger and collective fear.”

In his remarks, Candaleria made a challenge to our delegates “to do something different, be open to new ideas and best practices. What new decisions of programs will you push that will support our most vulnerable students and communities?” he asked. “Challenge each other to think outside of the boxes that you may have created or might have been created for you. This is a huge opportunity for all of us.”

Following additional remarks from our NEA Director Brenda Seehafer, executive director Chad Oban and an overview of the 2021 ND Legislative Assembly, the business session began at approximately 10:00 a.m. Vice President for Education Alicia Bata spoke on behalf of the Credentials Committee, and she reported that there were 58 voting delegates present. Alan Leintz, from the NDU Board of Directors, moved to accept and file the order of business with flexibility, and the motion was approved electronically.

One New Business Item was brought forward for a vote. NBI #1 was submitted by the NDU Board of Directors, and read as follows:

“The NDU Foundation Special Assessment Allocation be changed to one-third (1/3) for professional development and two-thirds (2/3) for the general operations of the Foundation.  This would be effective for the fiscal year starting September 1, 2021.”

NBI #1 passed by electronic vote, and no other NBIs were introduced.

Five board positions were filled without a vote, due to candidates successfully filing petitions and running unopposed. They were elected without objection, after President Archuleta moved to elect by unanimous consent. These candidates and new board members are:

Five more board positions were then filled by voice vote from their respected constituencies, after being nominated from the (digital) floor. Those individuals are:

Two positions on the board – Higher Education Two-Year Director and K-12 Less Than 600 Director – were left unfilled due to no nominations or petitioned candidates. The NDU Board of Directors can fill these two positions at a later date for one term at their discretion, according to the NDU Constitution and By-Laws.

Delegates elected to represent ND United at the NEA Representative Assembly this summer were:

Outgoing board members were then recognized and thanked for their service. They are:

The Delegate Assembly finished after Vice President for Public Employees Gary Feist and NDU CFO Gary Rath walked delegates through the proposed 2021-22 Budget. A motion to adopt the budget plan as presented was made and officially adopted by electronic vote.

Our entire union would like to thank all of our delegates who attended what President Archuleta playfully referred to as “our second, and last, virtual Delegate Assembly. Hopefully, at this same time next year, we all can again safely assemble together again, face-to-face, for our annual Delegate Assembly.